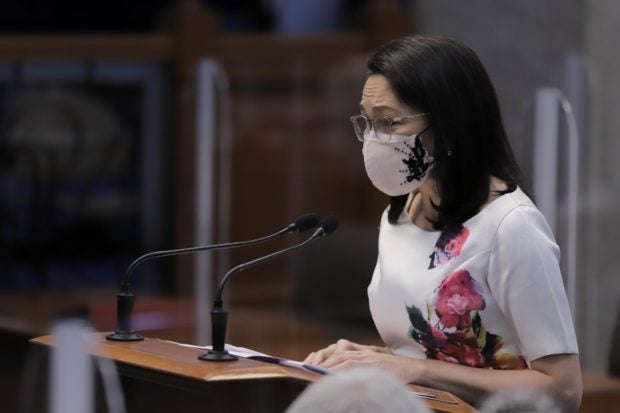 MANILA, Philippines — Senator Risa Hontiveros on Wednesday uncovered connections between “shady” individuals and the firm that bagged over P8.6 billion in government contracts to supply pandemic-related goods, which senators have earlier flagged as overpriced.

The senator posed these questions amid the Senate blue ribbon panel’s investigation into the controversial procurement of “overpriced” medical supplies at the height of the pandemic.

The company at the center of the probe is Pharmally Pharmaceutical Corp., which bagged government contracts worth over P8.6 billion in 2020 despite being only several months old.

Meanwhile, a relative, Huang Tzu Yen, who is an incorporator of Pharmally Pharmaceutical Corp and Pharmally Biological Inc., is “wanted for stock manipulation,” the senator added.

Hontiveros showed to the media a copy of Huang Tzu Yen’s arrest warrant which she said her office retrieved from the website of Taiwan’s Ministry of Justice Investigation Bureau.

What’s puzzling, Hontiveros said, is that even if there are arrest warrants against these personalities, Pharmally was still able to secure a procurement contract in June this year.

“Why did we even deal with these shady individuals and companies?” she asked.

INQUIRER.net also tried to reach out to a representative of Pharmally, but has yet to receive a response.

According to her, directors of the Full Win Group of Companies are also incorporators of Pharmally.

Further, the senator pointed out that the chairman of Full Win’s “Philippine version” is no less than Michael Yang, a former economic adviser of President Rodrigo Duterte.

Hontiveros then circled back to the video presented during the Senate blue ribbon panel’s hearing last Friday, which showed Yang and officials of Pharmally Pharmaceuticals Corp. meeting Duterte in Davao City  in 2017.

“Is there more to this story than what the president is leading us to believe?” Hontiveros went on.

In a taped address aired Tuesday, the President defended Yang and even cleared him from involvement in the illegal drug trade amid reports linking him to Pharmally.

Duterte also explained why he is meeting up with Chinese businessmen, saying he needs to garner investments for the country.

While Hontiveros said she understands the need to attract investments for the country, she asked: “Gusto natin ng investors, pero anong klaseng investors?”

He ‘better show up’

The Senate blue ribbon committee had invited Pharmally officials and Yang to explain their side in the panel’s hearing last Friday but they did not show up.

These personalities were once again summoned to the resumption of the blue ribbon investigation on Sept. 7.