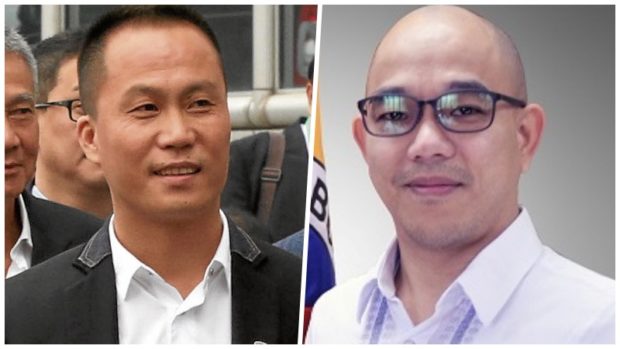 MANILA, Philippines — Sen. Richard Gordon, chair of the Senate blue ribbon committee, said on Tuesday that he had summoned two other associates of President Rodrigo Duterte and Sen. Christopher “Bong” Go, and a Chinese ex-presidential adviser to a hearing on the purchase of the alleged overpriced medical supplies made by the Procurement Service of the Department of Budget and Management (PS-DBM).

“If you are a lawyer worth your salt, you look at the common denominator: They belong to the same fraternity with the president; they are all from Davao; and they all come from the office of SAP [Special Assistant to the President] Bong Go,” Gordon said, referring to the two lawyers.

He made the statement during an online press briefing in response to tirades from the president.

In his weekly address to the people that was broadcast on Tuesday, Duterte castigated senators for implicating his appointees in the alleged overpricing of face masks, face shields, personal protective equipment, and other pandemic supplies.

The president also defended his former economic adviser, Chinese national Michael Yang, who had introduced him in 2017 to officers of Pharmally International Holding Co. Ltd., a company related to Pharmally Pharmaceuticals Corp., which bagged P8.7 billion worth of contracts for “overpriced” pandemic supplies.

Duterte dismissed allegations made by a former police officer that Yang was linked to the illegal drugs trade as he had known the businessman who had been trading in Davao City for the past 20 years and was a friend of former Chinese Ambassador Zhao Jianhua.

“You know, Zhao is a colonel of the People’s Liberation Army. He’s military. Will he allow himself [to be associated with a drug lord]?” Duterte said.

Go, a longtime aide of Duterte who was elected senator in 2019, is still often seen at his side.

Lao, who was Duterte’s election lawyer in 2016, retired in June this year as executive director of PS-DBM where Liong served as one of the directors. Lo is now one of three candidates for deputy ombudsman for Mindanao.

‘Based on merit, trust’

In a privilege speech, Go defended the appointment of the president’s former counsels from his hometown of Davao.

“In any administration, the reality is that appointments are not only based on merit but also trust, whether it’s in the capacity of the person or his character. Why is it made a big issue now that his appointees are from Davao?” Go said.

Political appointees are the president’s personal choice, but being the Chief Executive’s lawyer does not make him the SAP employee, Go said.

“Don’t be hypocrites, because you, too have relatives, fraternity brothers, province mates, friends in your offices,” he said.

Lao also served as head of the Housing and Land Use Regulatory Board in 2017 before moving to PS-DBM in 2020.

Gordon suspected the “Three Ls” to be involved in awarding billions of pesos worth of contracts to allegedly dubious companies.

Senators had grilled Lao for failing to perform due diligence in determining the credentials of Pharmally.

“That is what we want to find out, whether these undersecretaries had anything to do with the biddings. But we notice that they are all having good fortune, and now own large houses; we learned that one of them owns a Maserati,” Gordon said. He did not say who it was.

He also suspected that all three were aiming to get into the Office of the Ombudsman, with Liong already in.

“They want to be assigned in Mindanao so that they can have someone to cover their tracks, and even if they face suits afterward, they are there (in the Ombudsman). It’s a form of escape—that is my own theory,” he said.

The Inquirer could not reach the three lawyers for comment.

Gordon said it was “mind-boggling” that an undersecretary could have approved nearly P200 billion worth of transactions during the pandemic.

“In the middle of a pandemic, government money is vanishing, being spent on these contracts while we cannot pay our health workers, and we were laggards in the purchase of vaccines,” he said.

He said there was “a possibility that the PS-DBM was influenced by the close association of Pharmally with the president.”

He said a subpoena to Yang to appear in the Senate probe could not be served as the businessman could not be located.

The Radio Television Malacañang recorded the March 17, 2017, meeting in Panacan, Davao City, between Duterte, Yang, and officers of Pharmally International led by its chair, Huang Wen-Lai.

In his address on national television, Mr. Duterte said allegations made in March 2019 by Eduardo Acierto, a dismissed deputy director for administration of the police Drug Enforcement Group, that Yang was involved in the illegal drugs trade were baseless.

When the pandemic struck, the president said Yang partnered with foreign corporations, nearly all of them Chinese, to get access to the much-needed supplies from China.

“He (Yang) has contact with big corporations in China and it was through him that they made their entry here,” Duterte said. “I thought we’re supposed to go to China and invite investors here. Now that they’ve invested in the times of pandemic, what’s wrong with that? Tell me.”

Yang made his mark as a businessman who established the Davao City Los Amigos (DCLA) mall when Duterte served as Davao City mayor in the early 2000s.

The mall is very popular among the middle and lower classes who look for low-priced China-made gadgets and other products.

Sebastian Angliongto, a businessman and former chair of the Mindanao Economic Development Council, the precursor of the present Mindanao Development Authority, said Yang was familiar to the Davao Chinese-Filipino community.

“For me as a friend, I have no issue with him because he is a good and kind person, though, I don’t know anything about his businesses,” said Angliongto, who also serves as the chair emeritus of the Mindanao Business Council.

Yang and Duterte were frequently seen dining together in a Chinese restaurant during that time on Magsaysay Street.

“I don’t know how they communicate because Michael Yang did not know how to speak English; he could not understand Tagalog or Bisaya, but they became good friends,” he said.