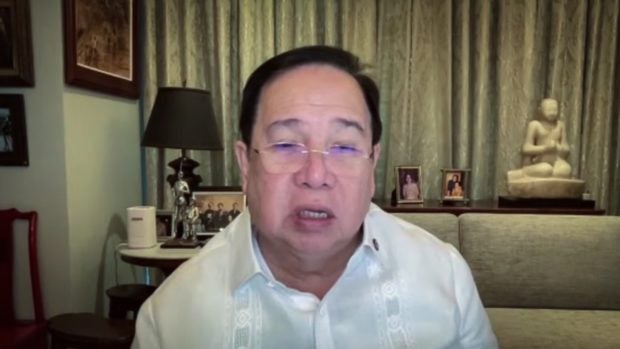 MANILA, Philippines — Senator Richard Gordon, chairman of the Senate blue ribbon committee, on Friday defended the investigations conducted by the upper chamber after President Rodrigo Duterte claimed that such probes lead to “nothing.”

“Konting respeto rin naman po, we respect you. I respect you because you are the president of the Philippines. I always respect the title and the man,” Gordon said as he opened the resumption of the blue ribbon’s inquiry on the Department of Health’s (DOH) handling of pandemic funds

In a taped public address aired late Thursday, the President criticized what he claimed was the  “posturing” of some senators and called on the public not to believe their investigations as they only lead to “nothing… no recommendation, no charges filed, no persons jailed.”

Gordon cited the previous investigations of the blue ribbon committee, saying they have been “effective and meaningful.”

“We have concrete results and we submit our recommendations and copies of decisions with findings to the Department of Justice (DOJ) and the Office of the Ombudsman. Most of the inquiries had led to the conviction of various high-ranking government officials,” the senator said in a separate statement.

“I am sorry that the President said that the lawmakers just hold hearings for publicity and that nothing happens, no one was put to jail, and no lawsuits have been filed. These are mere speculations. His staff should take a look at the effectiveness and the meaningful job that the Blue Ribbon has undertaken,” he added.

“It will be remembered that the Committee started the investigation into the matter. We were able to collect facts and video evidence which the Ombudsman used in order to attain a conviction,” Gordon said.

He also said that the Senate’s investigations also led to the discovery of many “crooks” at the Bureau of Customs, the Bureau of Corrections, and even caused then Philippine National Police chief Oscar Albayalde to resign in light of the blue ribbon panel’s probe into the “ninja cops” controversy.

“Our investigation into drug importations using the Port of Manila has led to the removal of many crooks at the Bureau of Customs,” he said.

“Various anomalies and irregularities surrounding the Bureau of Corrections were also exposed because of our investigations on the erroneous release of Good Conduct Time Allowance (GCTA) to inmates,” the senator said.

He also mentioned the NBN-ZTE deal, which was cancelled after his committee “discovered during the investigation that there was an overprice and the apparent attempt of high government officials to profit from the project.”

“We, at the Blue Ribbon Committee, do not waste our time and effort for publicity. We produce results. Facts speak for itself. And we will continue to do our job in accordance with our oath of office,” he added.

“It is our responsibility as duly elected representatives of the people to unearth truths, especially concerning disbursement of public funds,” he said.

He added that numerous Senate investigations not only yielded to numerous meaningful legislations but also led to the prosecution of corrupt officials.

“There’s a long list of these instances. The Senate, perhaps, can submit a list to Malacanang,” Drilon went on.