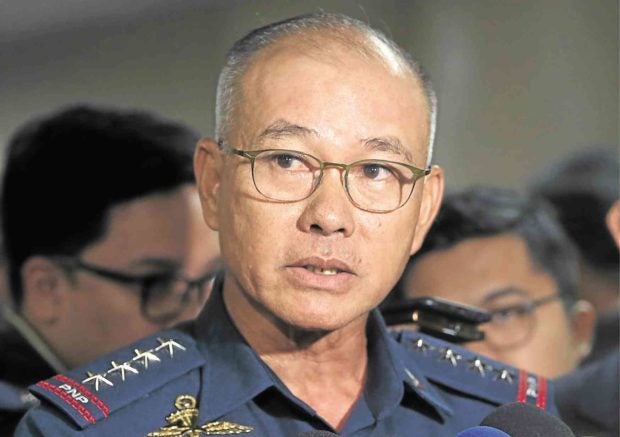 MANILA, Philippines — Philippine National Police (PNP) chief Gen. Oscar Albayalde stepped down from his post on Monday, as the investigation on alleged drug recycling in Pampanga province in 2013 further heated up.

“After careful thought and deliberation, I have come to the decision to relinquish my post as Chief [of the] PNP effective today and go on non-duty status. I have submitted my letter of intent to [Interior] Secretary [Eduardo] Año which he accepted and favorably endorsed to the President,” he said in a speech before PNP personnel during his last flag-raising ceremony at Camp Crame in Quezon City.

“Do not let these challenges demoralize or stray you from your path,” he said.

“Since I am retiring compulsory on Nov.8, 2019, this will pave the way for the appointment of my replacement should the President so desires,” said Albayalde, who was supposed to finally hang his police uniform when he reaches the mandatory retirement age of 56 on that date.

Albayalde said he had spoken with Interior Secretary Eduardo Año over the weekend regarding the Senate investigation on the questionable anti-drug operation in Pampanga in 2013 when he was chief of the Pampanga Police Provincial Office.

But during his speech, he reiterated he was not involved in the alleged irregularities in the police operation.

Albayalde, who was placed at the helm of the police force in April 2018, then thanked all the personnel of the PNP for their “hard work, loyalty, and dedication to the service,” and for helping him face the challenges and achieve his objectives during his term as PNP chief.

“My last command as chief [of the] PNP is for you to carry on in the service of our fellow Filipinos so that all of us may live and work in peace,” he said.

“And above all, I thank God Almighty for this once in a lifetime opportunity to have led as the 22nd chief of the Philippine National Police,” he said.

Opposition Sen. Franklin Drilon, a former justice secretary, said Albayalde’s resignation did not clear him of potential criminal liabilities and called for stricter vetting of candidates for the top national police post. He said he would work to amend regulations to prevent illegal drugs seized by law enforcers from being stashed and resold.

“The next Philippine National Police chief will have to work doubly hard to regain the credibility of the police community and the government’s drug war,” Drilon said.

Several officials — including former Criminal Investigation and Detection Group chief and now Baguio Mayor Benjamin Magalong — said during Senate hearings on the so-called ninja cops that the PNP chief — in a call made to Philippine Drug Enforcement Agency chief Aaron Aquino — had tried to intercede in the dismissal of the charges filed against the officers who conducted the Pampanga drug raid.

Another official, retired police general Rudy Lacadin, testified that the PNP chief had also called him regarding his investigation into the 2013 raid, and had told him that Albayalde “got just a little” from that operation.

The 13 officers seized a large quantity of methamphetamine, a powerful and prohibited stimulant, in a raid.

The officers later faced allegations that they presented a small fraction of the seized drugs in a news conference, possibly to foster their promotion, then hid and sold the rest, with suspicions being fueled when they purchased pricey SUVs not long after.

Albayalde’s men allegedly freed a suspected Chinese drug lord in exchange for a huge bribe then arrested another foreigner, who they presented as the owner of the seized drugs.

Albayalde pointed out that state prosecutors cleared the officers of criminal complaints they had faced for the alleged offenses.

Albayalde said the allegations against him may have been an offshoot of jockeying for the top police post that he would vacate if he has stayed in his post until his retirement.

He acknowledged, however, that as a result of the 2013 incident, he was put on a “floating status,” which meant he was transferred to a regional police force without being given any specific assignment or post. Several months after, however, he was appointed as chief of the National Capital Region Police Office and as PNP chief in April last year.

“No protest was made on my appointment,” Albayalde said. “Implicitly, it may be assumed that the president himself was aware of my appointment to that position.”

Asked in recent weeks about the possibility of firing Albayalde, the President replied he would allow Año to make a recommendation to him after an assessment.

The wait contrasts with the President’s outright firing of other government officials accused of corruption and irregularities.

– With reports from the Associated Press and Leila B. Salaverria, Inquirer