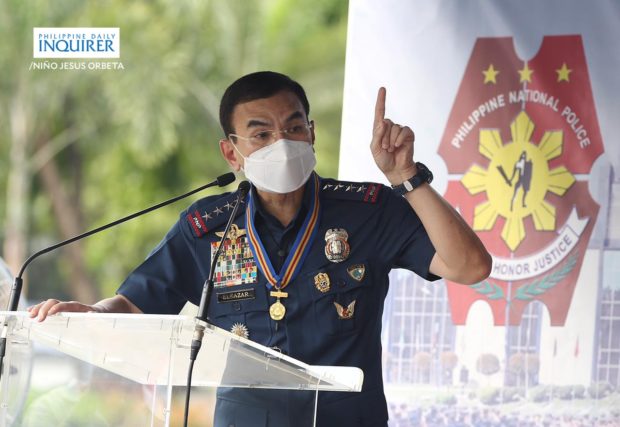 MANILA, Philippines — The Philippine National Police (PNP) insisted that it has no policy to kill drug suspects, saying that the conviction of Kian delos Santos’ killers is a “constant reminder” to police officers that wrongdoings and abuse of power would not be tolerated.

PNP chief Gen. Guillermo Eleazar said this on Tuesday, a day after the fourth death anniversary of Delos Santos — the 17-year-old student from Caloocan who died in the hands of police operatives who claimed that he was involved in the drug trade.

However, a November 2018 ruling eventually revealed that Delos Santos was not the original target of the police operation, and that he was summarily executed.

(The instructions of President Rodrigo Duterte are also clear that police officers should just follow what is stated in the law, that we should also protect ourselves if our lives are placed at risk.)

“The case of Kian will serve as a constant reminder to all our personnel that we will never tolerate wrongdoings and abuse the power that was given to us by the Filipino people whom he vowed to serve and protect,” he added.

Eleazar’s remarks were in response to the statement of the Commission on Human Rights (CHR), which said that even after four years since the controversial drug war incident, the killings have yet to stop.

CHR said on Monday that the call to stop the killings, after numerous drug war deaths, remains the same.

The arresting officers claimed that they shot Delos Santos after he resisted arrest and opened fire at them.  However, a closed circuit television (CCTV) camera footage used as evidence by the court showed that the victim was instead dragged to a dark area before he was shot.

Eleazar admitted that the death of Delos Santos was one of the PNP’s lowest points.  However, he also assured that they have tried their best to reform and clean their ranks.

“While the case of Kian delos Santos was one of the lowest points of the PNP, it also showcased the strong resolve of the police organization to clean our ranks and initiate aggressive reforms to further institutionalize transparency and accountability,” he said.

Eleazar also said that 5,000 police officers have been dismissed from the service since 2016 for various offenses, with most of these dismissals coinciding with President Duterte’s term.

He added that thousands more of PNP personnel were suspended, demoted and punished with forfeiture of salary.

Eleazar asked for the public to continue trusting the PNP and the justice system, which he claimed is working to prosecute those accused of wrongdoings.

(PNP does not condone these acts, and the police force continues to file administrative cases against abusive police officers.)

(I am appealing to the public to continue trusting the justice system because it works, and continuously provides justice and protection to those abused.)

The killing of Delos Santos has been used several times to justify criticisms against Duterte’s bloody drug war, which has claimed over 6,000 lives in legitimate drug operations.

While there are instances where police officers really faced threats from suspects being arrested, various human rights groups and advocates questioned the so-called ‘nanlaban’ narrative, where drug personalities who died are immediately characterized as suspects who resisted.

Right now, Duterte and other drug war implementers are facing possible prosecution before the International Criminal Court (ICC) after former prosecutor Fatou Bensouda sought judicial authority to conduct a full-blown investigation into allegations that the crime against humanity of murder was committed.