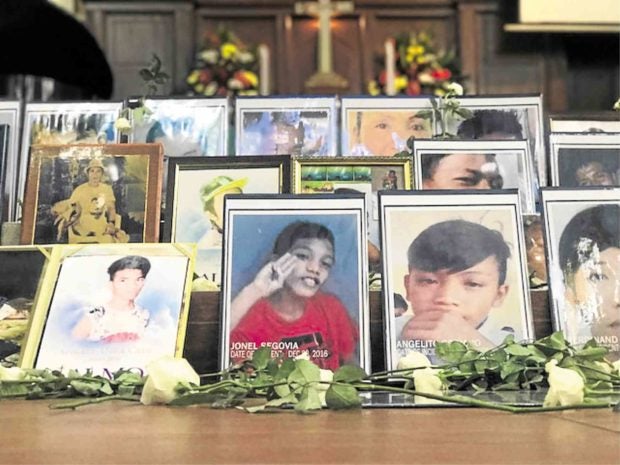 WAITING FOR JUSTICE Pictures of victims of extrajudicial killings in the war on drugs are displayed at a church in Tondo, Manila, in this file photo. INQUIRER file photo / AIE BALAGTAS SEE

MANILA, Philippines — Lawyers representing the families of drug war victims have asked the International Criminal Court (ICC) to pursue its full-blown investigation into President Rodrigo Duterte’s bloody campaign, claiming that it is the last hope for justice.

According to lawyers Neri Colmenares and Maria Kristina Conti of the National Union of People’s Lawyers (NUPL), if ICC grants the request of the Office of the Prosecutor, it would allow investigators to dig deeper at the deadly incidents to uncover evidence pointing to Duterte.

This statement from NUPL comes on the last day for the victims to submit their views to the International Criminal Court (ICC), about the former prosecutor Fatou Bensouda’s request for judicial authority to do a full-blown probe on the war against illegal drugs.

“Granting the OTP’s request will formally allow ICC prosecutors to more closely investigate the deadly incidents, gather and receive evidence, and to determine accountabilities of persons involved in drug war-related killings and rights violations while Duterte sat as president of the Philippines and as mayor of Davao,” Colmenares and Conti said.

“For many of them, an ICC investigation is their last chance at justice. We exhort other victims of Duterte’s ‘war on drugs’ to submit their own forms before the day closes. The present victim representation stage is an opportunity to be heard directly by the judges sitting in the pre-trial chamber, and a step towards effective and meaningful participation,” they added.

Last June 21, just before she stepped down from office, Bensouda asked the ICC for a judicial authority to investigate claims that Duterte committed the crime against humanity of murder in leading the bloody drug war.

Bensouda said that there is sufficient basis to believe that law enforcers committed extrajudicial killings (EJKs) either directly or indirectly during the drug war — maintaining that information gathered by her office shows that state actors have killed thousands of civilians under the war against illegal drugs. Police officers themselves perpetrated those vigilante-style killings.

There were instances, according to Bensouda, authorities hired private individuals to implement the drug war — leading to a death toll of between 12,000 to 30,000 civilians.

President Rodrigo Duterte and his administration have constantly maintained that the ICC is only wasting its time as the international body does not have jurisdiction over the country after it withdrew from the Rome Statute, the international treaty that created the ICC.

Many accuse Duterte of using the drug war as a means of repressing the poor.  As Duterte’s term winds down, there is concern about the administration’s ability to stop the drug trade despite encouraging drug users to surrender.

Many experts, including Bensouda, believe the Philippines remains under ICC jurisdiction. The events mentioned in the complaints drafted by Rise Up and other concerned citizens occurred before the country stepped out of the Rome Statute.

It is still the case, however, that Malacañang will not cooperate with any investigation.

However, Colmenares and Conti think Duterte’s answers and statements show he now recognizes the strength of ICC probes.

“Duterte himself may now realize how formidable the ICC can be, which has the ability to order the arrest and detention of heads of state. Recent developments, such as the imminent handover of Sudan’s detained former president, Omar al-Bashir, to the ICC, point to narrowing options for Duterte,” the lawyers said.

“We call on victims and their families, as well as human rights advocates, to unite so we can successfully prosecute President Duterte and his co-perpetrators for their heinous crimes and attain justice for the Filipino people,” they added.

Read Next
AFP demands justice for killing by Reds of soldier on humanitarian mission
EDITORS' PICK
Work-From-Home is here to stay and requires reliable logistics
PH still at bottom of COVID-19 economic resilience ranking
Renewal of driver’s license now requires taking LTO education seminar
TNT nears PBA crown after rout of Magnolia in Game 4
Climate Change Commission and Nestlé PH to discover sustainability-focused solutions
Legarda emphasizes role of ICC/IPs in nation building this IP month
MOST READ
Drivers now required to take driver’s education upon license renewal – LTO
Marcos Jr’s ‘special diploma’ from Oxford: You can have it, too
OVP spox to Imee Marcos: Robredo is an extraordinary lawyer
Don’t do that: Robredo to supporters calling to boycott restos supportive of Marcos
Don't miss out on the latest news and information.