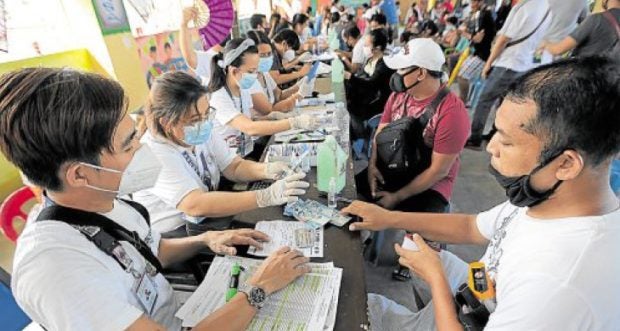 MANILA, Philippines — A congressman and the former social welfare secretary of the administration on Tuesday criticized President Rodrigo Duterte for politicizing the distribution of cash aid in Metro Manila, which returned to a hard lockdown since last Friday, August 6.

Bayan Muna party-list Rep. Ferdinand Gaite said Duterte’s decision to let the Department of the Interior and Local Government (DILG) and the Department of Social Welfare and Development (DSWD) take over the distribution of financial assistance in the National Capital Region (NCR) would only cause further delays.

The Chief Executive said in a pre-recorded national address aired Monday night that he removed the cash aid distribution from a local government unit, which he did not identify, for being disorganized. He even mocked the mayor of that local government, but he did not reveal the name of the local leader.

(The problem with this is that Duterte even dragged the cash aid into his politicking. The aid is already meager and might even be stalled. The financial aid is actually already delayed as we are almost a week into the lockdown.)

(Ordering DILG or DSWD to take over its distribution would delay it further. The slow aid distribution already happened before, and it will definitely happen again. Malacañang must withdraw that plan, speed up the process of delivering adequate aid to the people, and focus on the people’s needs now that there is a pandemic instead of politicizing and attacking who they fear they would be up against in 2022.)

Duterte said he had assigned the DILG and the DSWD to carry out the financial assistance distribution in a city, which mayor “knows nothing at all.”

“There is one city that I will not give the power to distribute the aid,” he said. “In so many instances, they cannot organize. It has happened several times and several times he has blamed other people other than himself.”

And while he did not mention the mayor’s name, he nevertheless hinted that the local leader has “bikini” photos.

But Gaite pointed out that Duterte’s politicizing of the cash aid distribution just proves that the people’s welfare is not his top priority.

“Eyes on the ball, not on someone else’s balls. May oras pa siyang maghalungkat ng lumang litrato, eh nagugutom na ang taumbayan dahil sa kanyang lockdown (He found the time to search for old photos even when people are already going hungry because of his lockdown),” said Gaite.

“This only shows that the welfare of the people is not the president’s priority; what’s more important to him is advancing his own political agenda. This should give the people another reason to reject him or his chosen candidate in the coming elections,”  he added.

According to Taguiwalo, placing the responsibility of direct distribution of cash aid to the DSWD will only hamper the distribution as the agency is already burdened with ensuring that other social protection programs — such as the 4Ps, social pension and assistance to persons in crisis — are implemented.

“The President’s action will further delay the much-needed help for our people in this current situation where millions of our people are in urgent need of help. Remember the ECQ started on August  6,” she said.

“Ayuda distribution is supposed to start Wednesday, August 11. This means that in the past five days, our citizens who depend on daily earnings to survive are suffering from a lockdown which was not immediately accompanied with concrete assistance from the government,” she added.

Taguiwalo stressed that instead of delaying and politicizing the financial assistance distribution, Duterte should ensure that aid will be delivered as quickly as possible and additional help would be allocated because the minimum P1000 and maximum P4000 cash aid are not enough to meet the needs of the majority of people under lockdown.

The DILG earlier announced that the cash aid distribution will start on Wednesday, August 11, five days after the implementation of the enhanced community quarantine (ECQ) in Metro Manila prompted by the COVID-19 Delta variant scare.

The nation’s capital region will be on ECQ from August 6-20.