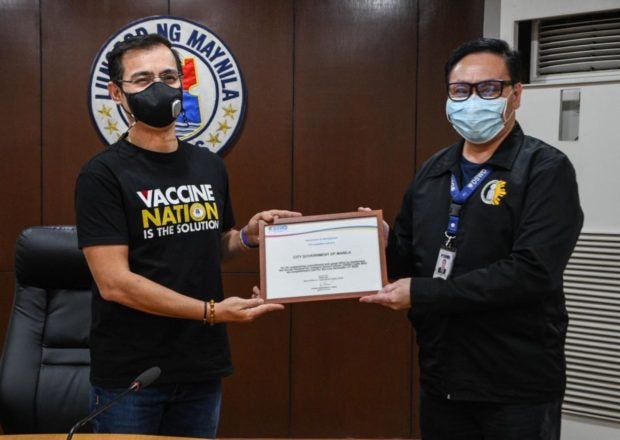 MANILA, Philippines — Apparently feeling alluded to by President Rodrigo Duterte about a certain city’s inefficiency, Manila Mayor Isko Moreno on Tuesday felt compelled to share a certificate of recognition issued by the Department of Interior and Local Government just two months ago on his performance in the distribution of the government cash aid to constituents.

The DILG’s certificate, dated June 30, 2021 and signed by Interior Secretary Eduardo Año, recognized Manila for its “efficient and timely completion of the distribution of ayuda (aid)” to alleviate the adverse effects of the coronavirus pandemic on his constituents.

Moreno’s move came after Duterte called out a certain metro mayor’s “disorganized” aid distribution, with a warning that he would not give the local executive any power to distribute the cash aid to those affected by the enhanced community quarantine (ECQ).

Good morning Manila! Congratulations Dir. Re Fugoso and All our staff from Manila Social welfare. Keep it up and keep safe. Manila, God first!☝️#KapitLangMayAwaAngDiyos

When pressed if his post was to counter the statement of Duterte in case the president is alluding to Manila City, Moreno only responded with a smile emoticon.

On Friday, Moreno said Manila has already received P1.488 billion pesos for the cash aid, the distribution of which may begin this Wednesday.

Duterte earlier approved the aid distribution of P1,000 per individual but not more than P4,000 per household under enhanced community quarantine (ECQ). Manila, as in the rest of the National Capital Region, is under ECQ.