Brazil’s Bolsonaro rages against probe, threatens to act beyond constitution 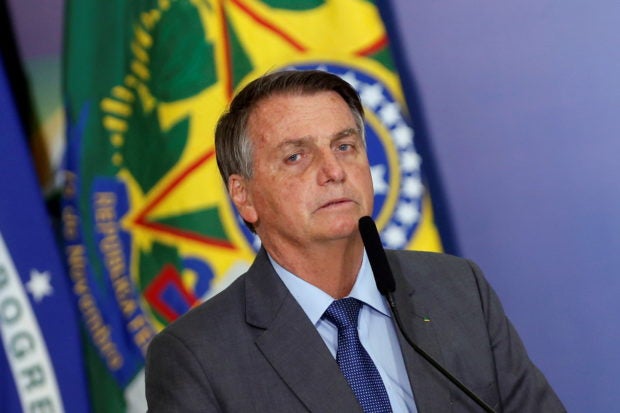 Brazil’s President Jair Bolsonaro talks during a ceremony of signing a decree establishing the Public Integrity System of the Federal government at the Planalto Palace in Brasilia, Brazil July 27, 2021. REUTERS FILE PHOTO

RIO DE JANEIRO — Brazilian President Jair Bolsonaro on Wednesday raged against a Supreme Court investigation into his conduct and threatened to respond outside the limits of the constitution, escalating the clash between the far-right leader and the judiciary.

Bolsonaro, who is expected to seek a second term in 2022, has repeatedly said Brazil’s electronic voting system is vulnerable to fraud without providing evidence.

Critics say Bolsonaro, like former U.S. President Donald Trump, is sowing doubts in case he loses in 2022. He has already threatened not to accept the result if the system is not changed.

Bolsonaro is calling for adoption of printed receipts that can be counted if any election result is disputed, a paper trail that would change the current all-electronic voting system. A proposal to that effect is currently with Congress, with a committee set to vote on it on Thursday. Analysts believe it has little chance of becoming law.

The president has called for people to take to the streets, and last weekend thousands of his supporters held demonstrations in several cities backing his proposal.

Read Next
Destructive Mayon yields life-saving soil
EDITORS' PICK
Beyond the Chocolate Hills: A farm-to-table, heritage culinary adventure of Bohol
MyCitiHomes premiers PH’s first 3-star certified BERDE District residential development
‘Crash Landing on You’ couple confirms pregnancy
Enrile contracts COVID-19: ‘To my critics and enemies, I am not going to die yet’
Metro Manila’s COVID-19 positivity rate jumps from 3.9% to 5.9% — OCTA
House energy committee chair Arroyo bats for cheap electricity
MOST READ
Duterte: It was correct for Bongbong Marcos to ‘decline’ presidential debates
Enrile contracts COVID and snipes at critics, foes: ‘I am not going to die yet’
Russia steps up missile strikes on Ukraine as G7 leaders gather
Dennis Padilla answers Leon Barretto’s open letter: ‘Been reaching out to you for 15 years’
Don't miss out on the latest news and information.