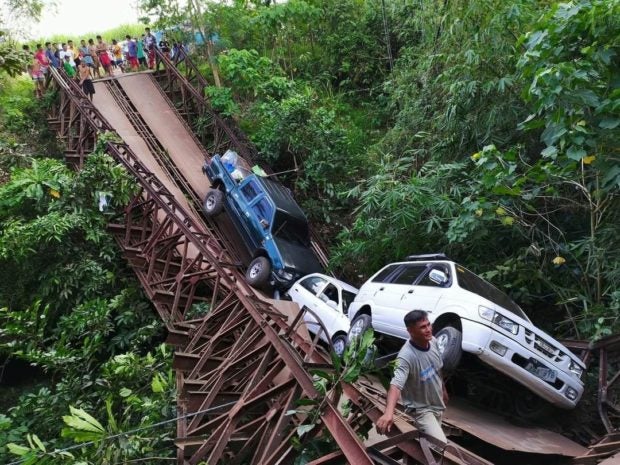 Three vehicles got stuck on a collapsed bailey bridge that connects La Carlota and Bago cities in Negros Occidental. The bridge collapsed about 4:30 p.m. on Sunday, August 1, 2021. (Photo courtesy of Jim Pieldad)

BACOLOD CITY – About 250 households were affected after a bridge, which connects La Carlota and Bago cities in Negros Occidental, collapsed at about 4:30 p.m. on Sunday, August 1.

La Carlota Mayor Rex Jalando-on said he instructed the City Engineer’s Office to conduct an ocular inspection and recommend the best course of action to expedite the construction of a new bridge.

At least 16 passengers on board three vehicles suffered minor scratches on their bodies when the Bagumbayan bailey bridge collapsed, said Police Lt. Joseph Jaro of the Bago City Police Station.

Christopher Trupa, the driver of the Isuzu Crosswind that was among the three vehicles on the bridge when it collapsed, said their convoy was delivering the personal belongings of their pastor who was assigned to a new Iglesia ni Cristo church in Barangay Jeorge Araneta in Bago City.

They were following a tricycle that had just reached Bago City when the bridge suddenly collapsed, he said.

Trupa, who sustained a few scratches, said his Crosswind with six passengers on board was being followed by a car with one passenger and an Isuzu Fuego pickup with nine passengers who were all part of the Iglesia ni Cristo group.

The bridge can only carry one light vehicle at a time but no warning sign has been placed.

Jalando-on said the bridge was built during the term of former Rep. Charlie Cojuangco about 20 to 25 years ago.

The bridge was made of recycled steel and was intended for tricycles and motorcycles only.

Jalando-on said he recently asked the Department of Public Works and Highways to inspect the bridge but they had not gotten to it yet.