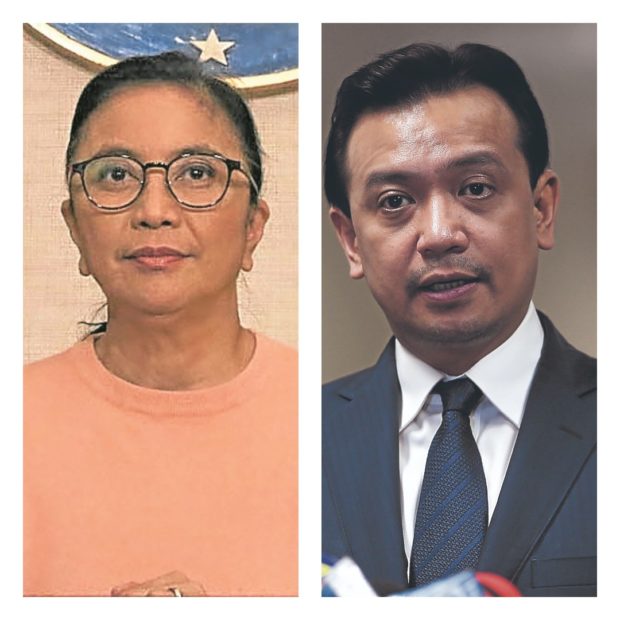 MANILA, Philippines — A spokesperson of Vice President Leni Robredo branded as “insulting” the insinuations made by former Senator Antonio Trillanes IV that her decision to meet up with Senator Panfilo Lacson undermined the struggles of fellow lawmaker, detained Senator Leila de Lima.

De Lima has been detained at the Philippine National Police (PNP) Custodial Center in Camp Crame for over four years now due to drug-related charges — which she claimed were spurred by just political vendetta.

But Robredo’s spokesperson Barry Gutierrez said Trillanes’s assertion is uncalled for as Robredo has been very supportive of the lady senator’s plight.

“Well first of all, I am insulted that he would even bring that up, ‘di ba. I am insulted at the insinuation that the Vice President has somehow, you know, not done all she can to support Senator Leila de Lima,” Gutierrez told ABS-CBN News Channel on Thursday.

“If you go through all these last four years ever since Senator Leila was imprisoned, the Vice President has been very consistent in speaking about the unjustness of what happened to Senator Leila,” he added.

Aside from Lacson, the Office of the Vice President also confirmed Robredo‘s meeting with Senator Richard Gordon — who also expressed interest in running for president — in order to create a broad coalition for the 2022 national elections.

Gutierrez further explained during the ANC interview that the talks were merely to explore a possible alliance, but no confirmation has been made as these were merely initial talks.

“It’s a meeting. It’s a conversation, ano. It’s an initial exploration of ‘can we work together? Would you still be willing to withdraw? Is it possible that we can come up with some kind of an arrangement?’ At the end of the day, you know, whether an agreement will actually be forged, whether anything will come from the meeting, you know, it’s up in the air,” Gutierrez said.

“And at the end of the day, the Vice President will still decide on the basis of what she feels is best insofar as 2022 is concerned. She has been very, very clear—the imperative for 2022 is to ensure a change in direction in the way national politics has been run in the last five years and she will do what she can in order to make that happen, if that means she will be the candidate, then she will do it,” he added.

This is not the first time that Trillanes had an issue with OVP regarding Robredo’s possible 2022 bid: last May 12, Gutierrez also had to clarify that the Vice President had yet to confirm her candidacy for Camarines Sur’s gubernatorial post.

This was after Trillanes announced on social media that Robredo is no longer seeking the presidency — prompting him to present himself as an alternative candidate.

Gutierrez has also reminded LP and its allies to keep calm while waiting for the Vice President’s decision — citing the irony between the opposition getting irritated at overeager politicians while urging Robredo to make a decision as soon as possible.

While the elections are still months away, the current administration’s possible bets have already figured in surveys, even without President Rodrigo Duterte naming his anointed candidate.

Various surveys have shown that Duterte’s daughter, Davao City Mayor Sara Duterte-Carpio, has started to lead the pack — which may indicate a hard uphill battle for the opposition.