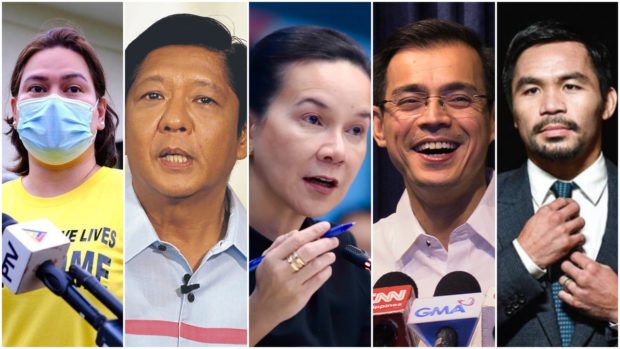 According to Pulse Asia, the face-to-face surveys done from February 22 to March 3, 2021, indicate that Duterte-Carpio remains the most preferred candidate with 27 percent of the respondents voting for her if elections were held on the day they were interviewed.

Marcos came in second with 13 percent of the respondents picking him, while Poe and Manila City Mayor Isko Moreno both garnered 12 percent.

“If the May 2022 elections were held during the survey period (i.e., 22 February to 03 March 2021), Davao City Mayor Sara Duterte would be declared as the winner in the presidential race with a national voter preference of 27%,” Pulse Asia said in their report released Thursday.

For vice presidential preference, 16 percent gives their nod to Moreno while Pacquiao and Duterte-Carpio are close at second place, with both scoring 15 percent.

“Out of 12 possible candidates for vice-president in the May 2022 elections, Manila Mayor Domagoso (16%), Senator Pacquiao (15%), and Davao City Mayor Duterte (15%) are statistically tied for the top spot as of February 2021,” Pulse Asia said.