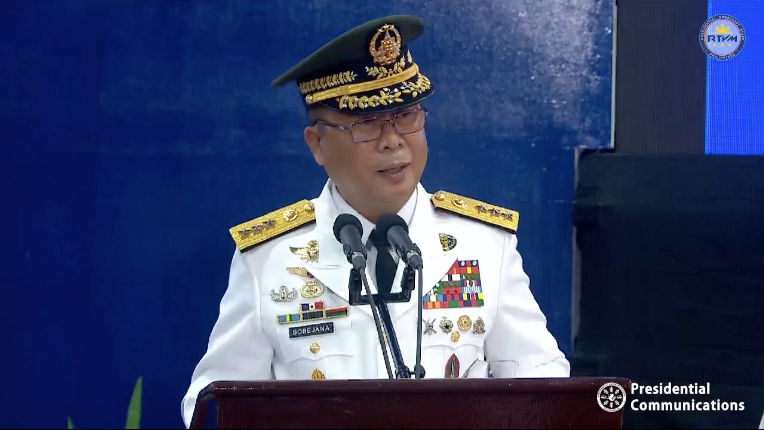 ZAMBOANGA CITY—Armed Forces of the Philippines (AFP) chief Gen. Cirilito Sobejana rules out the possibility of him serving in the civilian bureaucracy after he retires on July 31.

Sobejana told the Inquirer during his farewell tour Wednesday at the AFP’s Western Mindanao Command (Wesmincom) that he looks forward to a quiet life in his hometown of Zamboanguita in Negros Oriental after he bows out of military service.

“My mindset is to go back home where I was born, where I came from. I miss the people that I grew up with. I left my hometown at the age of 17 and now at the age of 56, I will be rejoining them,” said Sobejana, a graduate of the Philippine Military Academy in 1987.

Under the administration of President Duterte, many retiring top military commanders are usually offered posts in the civil service or government-owned and controlled corporations.

This practice was also pronounced during the time of President Gloria Macapagal-Arroyo who had to court military allegiance to her scandal-rocked administration.

“I will serve my neighbors, so service never ends,” Sobejana said.

But the bemedaled soldier, who has tucked 38 years of military service, was quick to point out that he would serve his community not by becoming a politician.

“I don’t have any plans of joining politics. We can serve in other capacities, even as ordinary citizens,” Sobejana explained.

On Wednesday, Sobejana visited Lower Kapayawan in Isabela City, Basilan, where he nearly lost his right arm in a four-hour battle against Abu Sayyaf bandits on Jan. 13, 1995.

Sobejana, who was a young captain then, commanded the Army’s 1st Scout Ranger Regiment. His platoon was beleaguered by some 150 Abu gunmen and despite being wounded, Sobejana never wavered in taking effective command of the troops, eventually repulsing the enemy.

His heroism in battle earned him a Medal for Valor in 1996. His right arm underwent reconstructive surgery, and he has since used his left arm to render a salute.

He said he placed a marker in the village and was happy exchanging stories with locals, “who now reap the benefits of the peace and security efforts” of the military and civilian agencies.

Sobejana said he looked forward to returning to the provinces of Basilan and Sulu “for swimming, snorkeling, and scuba diving, without the need for carrying a firearm.”

Sobejana lauded the various organizations and agencies who, in collaboration with the military, are winning the peace in the two provinces through non-combat means.

“With the mantra ‘ang taong masaya maraming magagawa’, he inspired our troops to keep moving to produce better results in accomplishing our mission,” said Vinluan, who will also retire in three weeks.