MANILA, Philippines—The current salary for uniformed personnel in the Philippine National Police (PNP) ranges from more than P29,000 a month to nearly P150,000 per month.

Among workers in the farming sector, the average daily pay is a little over P300 per day.

When President Rodrigo Duterte declared in his final State of the Nation Address (SONA) that he wanted free legal assistance for policemen and soldiers, he was apparently showing the enforcers of his bloodthirsty campaign against drugs and the insurgency that he meant it when he said “Ako ang bahala sa inyo (I will take care of you).”

He seemed to have forgotten that soldiers and policemen are already supposed to be receiving free legal assistance in the performance of their duties through the legal divisions of the PNP and AFP.

The need for legal aid would be understandable in the wake of Duterte’s controversial orders for police and military to “shoot them dead”, referring to drug suspects and communist rebels and “kill them all” for the insurgents.

While Duterte is immune from criminal charges as long as he is president, any one among his police or military force who would execute his shoot and kill order is not.

In his SONA on Monday (July 26), the President, while talking about the “idiot here in the Philippines” who gave rebels firearms, again said, “If you see them walking around, kindly shoot them dead. I would be happy.”

His remark was the latest in a string of instructions he made in recent years – asking the police and military to kill criminals and that he will “protect” and “promote” them.

In one instance in 2016, Duterte, while speaking before soldiers in Isabela province, told the country’s security forces who were at the frontline of his bloody campaign against drugs that he will “protect them” and that he will “not allow one policeman or one military to go to jail.”

This, lawyer Edre Olalia said, is why the President’s latest call to pass a law providing free legal assistance to military and police forces matches Duterte’s promise to protect his enforcers and which “emboldened security forces through assurances, not only of impunity but of the fact that they don’t have to worry about the complexities of the legal suit.”

“It is high time to pass a law providing free legal assistance to AFP (Armed Forces of the Philippines) and PNP (Philippine National Police) officers and enlisted personnel to help [defend] them from charges arising from incidents related to the performance of official duty,” Duterte said in his last SONA.

Olalia, who heads the National Union of People’s Lawyers, said “such proposed free legal assistance to them will be totally unnecessary if only they perform their jobs properly, regularly and legally, consistent and in accordance with basic rights and freedoms of the people.”

If policemen or soldiers will not perform their responsibilities, Olalia said they could face criminal, civil, and administrative cases.

Criminal cases include murder, violation of the rights of arrested persons as stated in Republic Act 7438, torture, illegal or arbitrary arrest or detention, irregular service of search warrants, incriminatory machinations, perjury, and even cyber libel for online red-tagging cases.

Civil cases involve damages for violations of constitutional rights as stated in Article 32 of the Civil Code of the Philippines. Administrative cases include violation of Republic Act 3019 or the Anti-Graft and Corrupt Practices Act.

Olalia said the police and military could also be held in contempt if they will not abide by the Supreme Court’s rule on wearing body cameras when serving search or arrest warrants.

In the past five years, however, some police and military men were allegedly performing their responsibilities with irregularities which resulted in 5,903 deaths in government anti-drug operations.

In March 2021, the United Nations Office of the High Commissioner for Human Rights said it is “deeply worried” about the killing of nine activists in Batangas, Cavite, Laguna, and Rizal during simultaneous police and military operations.

READ: Farmers use one word to describe Duterte legacy to them—neglect

Recently, a few hours before Duterte’s last address, two activists who were painting “Down with Duterte” graffiti at the Banao Bridge in Guinobatan, Albay were shot and killed by police and soldiers.

“Allegations of the ‘nanlaban’ narrative that the victims fought back and they possessed guns are not only ludicrously false—they are unbelievable tall tales because both [were] unarmed activists and they surely do not bear arms while doing graffiti,” said Karapatan.

According to Olalia, “with all these rights violations and abuses, it is the victims of security forces that most need free, competent and independent counsel.”

Legal assistance for the poor

Olalia said that everyone, including the military and police, are entitled to constitutional and even universal rights to due process which include the right to counsel.

However, he said that there should be a “sense of proportion,” especially because public officials, including law enforcement officers, do not fall short of institutional support because they “have the bureaucracy and the whole government machinery to back them up.”

Section 56 of Republic Act 8551 provides that the Secretary of Justice, chair of the Commission or the Chief of the PNP may authorize lawyers of their agencies to provide legal assistance to any member of the PNP who is facing charges at the prosecutor’s office, the court or any competent body, in connection with the performance of duty.

“If there is a sense of proportion, the poor victims are the individuals who need legal assistance the most because they are not financially capable,” he said.

Last January 2018, Duterte signed a joint resolution of Congress authorizing a salary increase for soldiers, police, and other uniformed men in the government.

The resolution stated that there was a need to adjust the compensation to “make it more commensurate with their critical role in maintaining national security and peace and order, taking into consideration their exposure to high-risk environments in the performance of their duties.”

But despite the hike, the PNP said that from July 2016 to September 2020, 15,768 personnel were penalized for several offenses, including the involvement in illegal drug trade, grave misconduct, serious neglect of duty, involvement in criminal cases, serious irregularity, malversation, dishonesty, and graft and corruption.

According to the resolution signed by Duterte, police officers receive the following monthly base pay since January 2019: 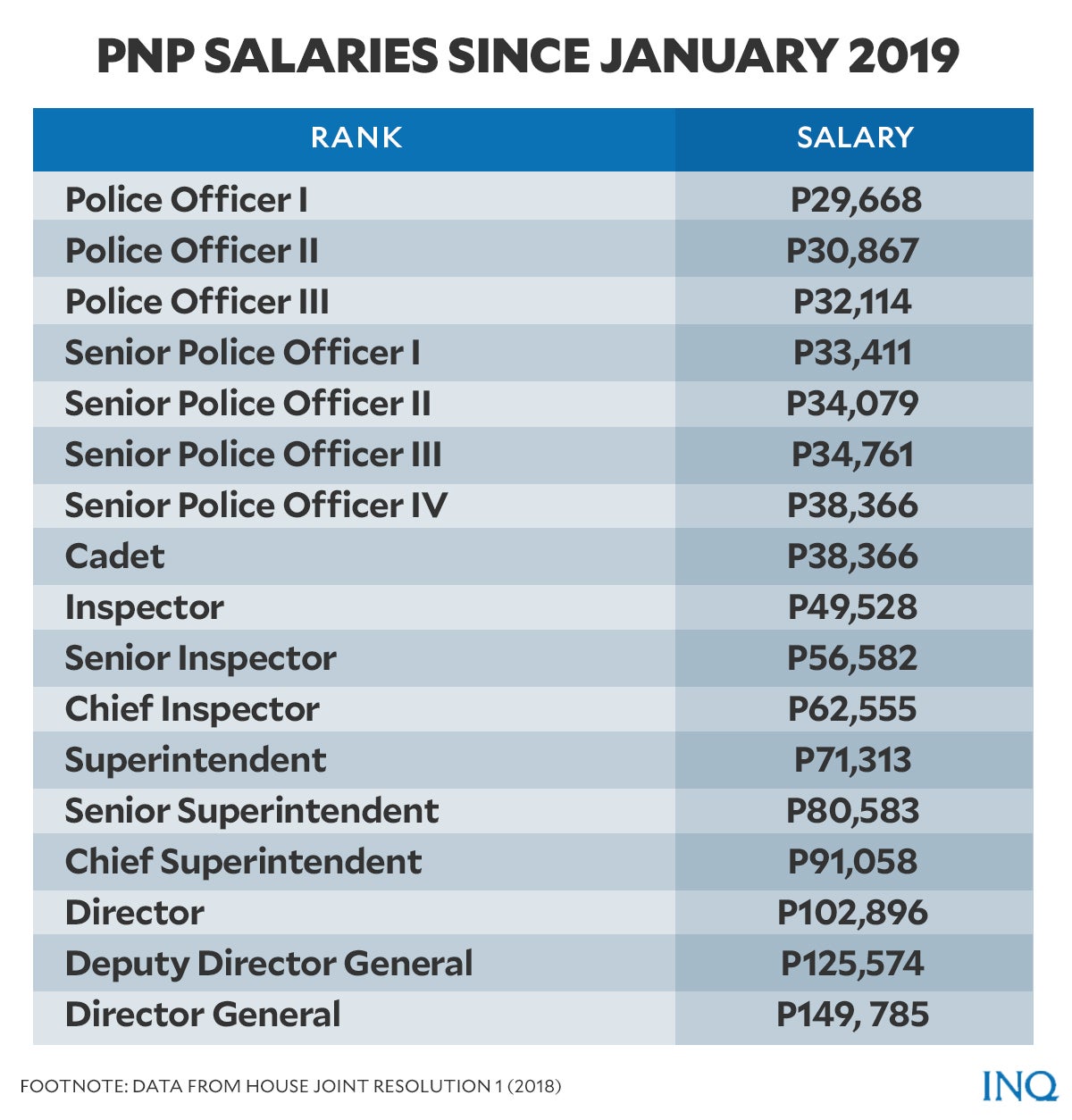 Military men receive the following monthly base pay since January 2019: 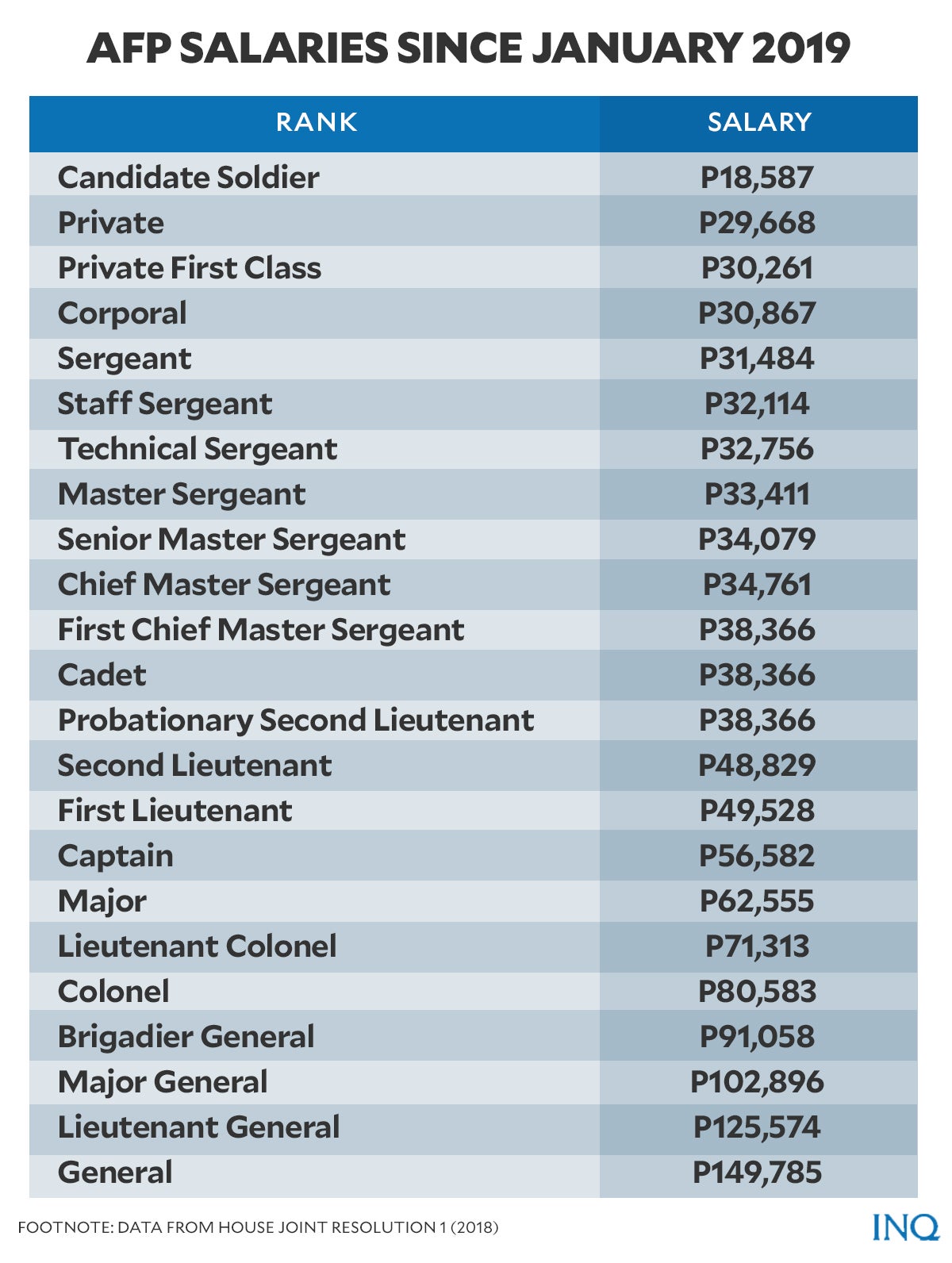 Compared to the minimum P15,000 monthly budget of families who considered themselves “poor” based on the latest survey by the Social Weather Stations, poor Filipinos have no financial capability to employ the services of a private lawyer.

In regions where most cases of killings of farmers and activists were recorded, farmers’ daily basic wage is P334.27 in Bicol Region, P329.71 in Davao Region, P305.883 in Western Visayas, P297.60 in Soccsksargen, and P276.43 in Central Visayas, according to the Philippine Statistics Authority.

In the Philippines, as stated by Republic Act 9406, indigent Filipinos can avail themselves of free legal services from the Public Attorney’s Office (PAO) which “shall independently discharge its mandate to render, free of charge, legal representation, assistance and counseling to indigent persons in criminal, civil, labor, administrative and other quasi-judicial cases.”

However, the requirements to avail of PAO legal services and the struggles to have the status of a “pauper (indigent) litigant” in court make it hard for poor Filipinos to really get free legal representation, Olalia said.

In 2018, government data showed that each lawyer from PAO handles 465 cases.

“The NUPL has 500 members nationwide, but only 250 are lawyers while the rest are law students. Of the 250, only 80 lawyers can represent litigants,” he said, explaining that the rest of the member-lawyers are judges and prosecutors.