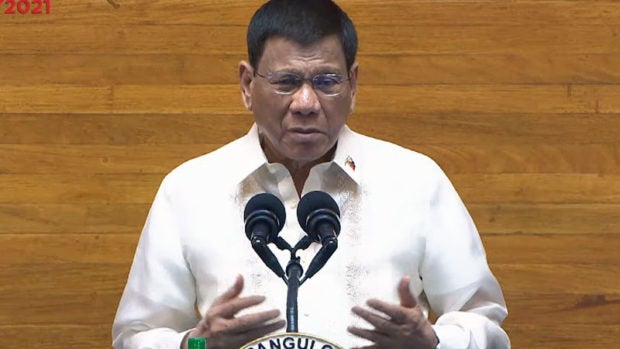 MANILA, Philippines — President Rodrigo Duterte again mentioned his often-repeated campaign promise to kill people who would “destroy the country,” even telling the International Criminal Court (ICC) to record and use his statements in his last State of the Nation Address (Sona) on Monday.

Duterte said that there was never an attempt from him to deny or hide his intentions to kill people who would try to destroy the country and the Filipino children — by dragging people into the drug trade.

The President is facing a complaint for crime against humanity before the ICC, for his bloody war against illegal drugs. Last June, former ICC prosecutor Fatou Bensouda asked for judicial authority to proceed with a full-blown investigation of the allegations against Duterte.

“Talagang yayariin kita because I love my country, we can do it the legal way but it will take you months and years,” he added.

Duterte also noted a sense of urgency now that he found out that some of the suspects in drug-related cases — especially those from the middle class — were released from prison despite being charged with non-bailable cases.

According to him, this was one of the reasons why he is exploring the possibility of running for vice president in 2022, once his term ends.

“And you know what, the statistics I just learned the other night that plenty of those who are in the middle class have been released from prison despite the fact that they are charged with trafficking which is non-bailable and most of them are out,” he explained.

And that is why I said, I toyed with the idea, I said if there is still space — with due respect to the Senate President, he is a good man, he can become a good vice president — (I will run),” he said.

This is not the first time Duterte has mentioned ICC during his speech: earlier, he asked Senator Ronald dela Rosa — his former Philippine National Police (PNP) chief — to look into rumors that a police officer is responsible for smuggling illegal firearms into the country.

He asked Dela Rosa to shoot the officers responsible dead, joking that there would be no difference since the senator was also charged with him before the ICC.

“My orders to you, if you see them walking around, kindly shoot them dead, I would be happy,” Duterte said.

“Anyway you’re only charged in the ICC together with me, so what is the problem of having another one, another idiot Filipino who has caused great damage to the country,” he added.

According to Bensouda’s report, there was information gathered by her office giving a reason to believe that state actors have killed thousands of civilians under the war against illegal drugs and that vigilante-style killings were perpetrated by police officers themselves, or other private individuals hired by authorities — leading to a death toll of between 12,000 to 30,000 civilians.

Investigations about the Philippines – if permitted – will be done by Bensouda’s successor, Karim Khan.