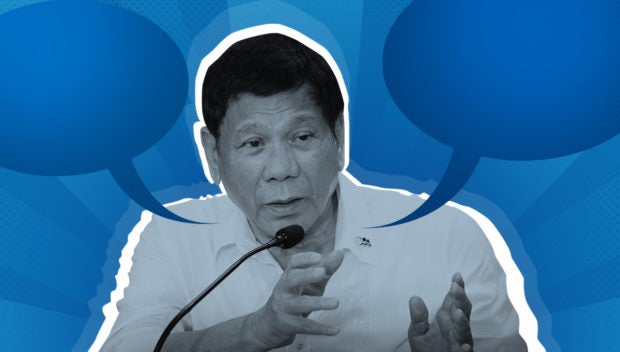 MANILA, Philippines—There are times when jokes simply do not land, especially about issues that are no laughing matter.

During President Rodrigo Duterte’s term, most— if not all—of his jokes were often criticized and seen as offensive, insensitive and misogynistic.

As Duterte delivers his last State of the Nation Address (SONA) on Monday (July 28), let’s take a look at some of his most shocking jokes.

Even before claiming the nation’s top post, Duterte has been criticized for his controversial comments.

During a campaign rally, the then-presidential candidate and Davao mayor made his notorious “the mayor should have been first” comment on an Australian missionary raped and killed during his term as city mayor.

“All the women there were raped in the first assault and they retreated but the bodies the attackers used remained there, one of which was the body of an Australian lay minister,” Duterte said.

“Tsk, this is a problem. The body was brought outside and it was covered. I looked at her face, son of a bitch, she looked like a beautiful actress in the United States,” Duterte went on.

“Son of a bitch, what a waste. I was thinking that they raped her and lined up. I was angry because she was raped, that’s one thing. But she was so beautiful, the mayor should have been first, what a waste,” he added.

His controversial statement led to a string of criticism and outcry from the public, urging Duterte to apologize.

At first, Duterte refused to apologize and has explained that what he said was “not a joke.”

“I said it as a narrative. I was not smiling. Do not make me apologize for something which I did not do. It’s a matter of honor. I said it in the heat of anger,” he said.

A full week after, Duterte finally issued a statement apologizing for his remarks “to the Filipino people.”

Unfortunately, the sexist and rape jokes did not stop there as it became like Duterte’s second nature to crack offensive jokes even in public.

After the elections, Duterte drew flak for wolf-whistling a female broadcast reporter at a nationally televised press conference in Davao City.

GMA 7 reporter Mariz Umali was asking a question about Cabinet appointees when she was interrupted by Duterte with a light-hearted comment about her trying to get his attention, then wolf-whistling and breaking into a short serenade.

The following year, Duterte yet again made rape jokes.

One was in a statement he made after he declared martial law in Mindanao.

The President assured soldiers he will have their back if they were accused of human rights abuses while martial law was in place, saying they could rape up to three women and he would claim responsibility for the crime.

The other joke focused on Miss Universe.

“You can mess with, maybe a Miss Universe. Maybe I will even congratulate you for having the balls to rape somebody when you know you are going to die,” he told the soldiers.

Most recently, ahead of the 2022 elections and amid speculation that his daughter would run for his post, Duterte commented that being president was not a woman’s job.

“This is not for women. You know, the emotional setup of a woman and a man is totally different. You will become a fool here. So that is the sad story,” said the 75-year-old Duterte in a speech apparently directed toward Vice President Leni Robredo.

READ: Duterte says presidency no job for a woman

This was refuted by Robredo, explaining that Duterte’s remarks could affect the campaign to promote gender equality and the rights of women.

Women are not the only subject of the President’s controversial jokes.

Amid the unrest and eruptions of Taal Volcano, Duterte cracked a few deadpan jokes about what he planned to do to stop the restiveness. The jokes, according to presidential spokesperson Harry Roque, was Duterte’s way of trying to “lighten the mood.” 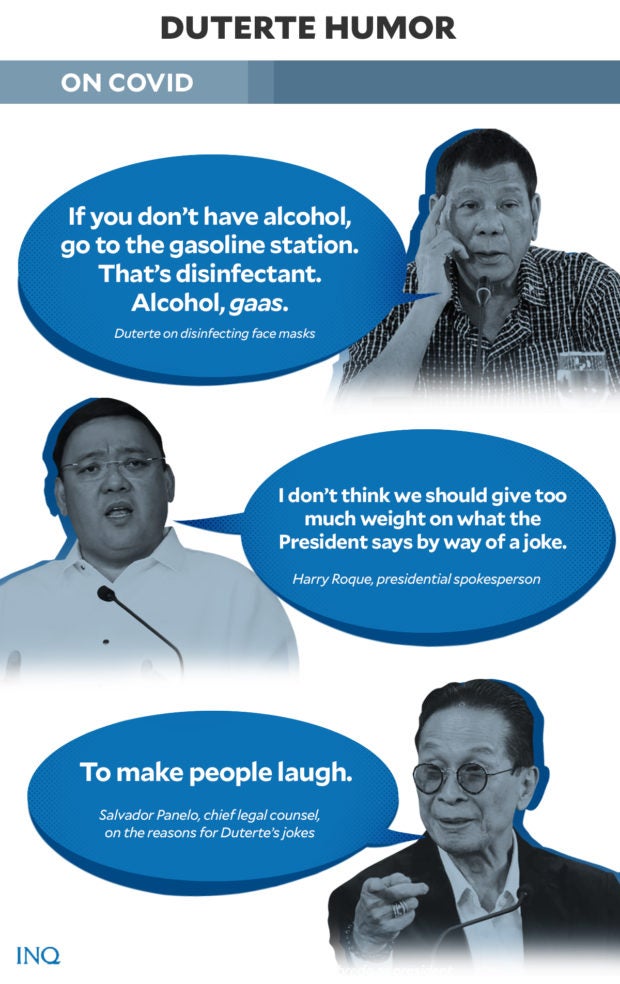 “The President, of course, was trying to lighten the mood because there’s a pandemic and now, the eruption of Taal Volcano. That’s the President’s style,” Roque said.

Duterte’s jokes on Taal included capping the volcano crater, praying to gods and offering a sacrifice and peeing on the volcano.

He even said in jest that he will eat ash fall from the volcano in a joke apparently intended to dismiss the pending disaster as something not to worry about.

The joke about capping the crater of Taal, however, did not sit well with some officials who said the President’s joke was insensitive to the suffering of the people.

READ: EXPLAINER: Here’s why you wouldn’t want to cap a volcano

Duterte has also suggested the use of gaas, or kerosene, as an alternative disinfectant against COVID.

“If you don’t have alcohol, go to the gasoline station. That’s disinfectant. Alcohol, gaas,” Duterte said in a taped speech in July 2020.

The President likewise claimed that face masks may be reused and that people can just soak them in gasoline or diesel.

“Soak it in gasoline or diesel. That son of a bitch COVID won’t last,” he added. “That’s true. If you want disinfection, look for gasoline. Soak your hands. Just don’t do it inside your house.”

According to the Integrated Chemists of the Philippines (ICP), gasoline is harmful to the body especially if inhaled.

The Agency for Toxic Substances and Disease Registry of the United States also warned that gasoline is “a mild skin, eye, and respiratory tract irritant” and might cause mild to severe irritation to the gastrointestinal mucosa or the mucous membrane layer of the stomach.

While Roque and the Department of Health (DOH) considered Duterte’s remarks as a joke, the president himself said he was not joking.

READ: Palace on Duterte’s advice to use gasoline as disinfectant: Joke only!

Several of Duterte’s remarks were not only offensive for some, but also dangerous and might bring harm if taken seriously or out of context.

To avoid this, most of the time, the President’s aides release statements or clarify Duterte’s message.

For instance, in 2017, then-presidential spokesperson Ernesto Abella explained that Duterte’s rape joke was meant only to impress upon soldiers that the President has their back.

“In Iligan, he gave his full support to the men and women in uniform, taking complete responsibility for their actions, even exaggeratedly describing crimes like taking a fourth wife,” he told reporters in a text message.

“As commander-in-chief he would stand by his personnel and that no one will be abandoned, including the fallen,” he continued.

Addressing a separate rape remark, Abella said Duterte was not joking. Instead, he clarified that the President made a sarcastic statement.

Months after, Roque told the public not to take Duterte’s rape jokes seriously.

“I don’t think we should give too much weight on what the President says by way of a joke,” he said at a press briefing.

Aside from Abella and Roque, several other close allies of Duterte tried to play down and spin his controversial statements amid the downpour of condemnation from his critics.

In 2019, chief legal counsel Salvador Panelo defended one of the President’s misogynistic jokes by saying that the jokes were only intended “to make people laugh.”