EXPLAINER: Here’s why you wouldn’t want to cap a volcano 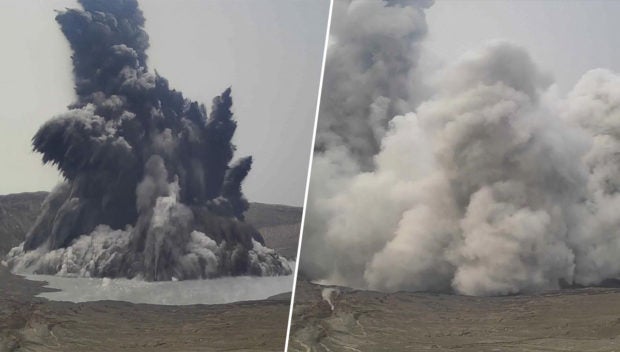 MANILA, Philippines — Following Taal Volcano’s eruption on Monday (June 30), which sent thousands of people fleeing from their homes, President Rodrigo Duterte made a deadpan joke that he would “cap” the volcano’s crater.

It’s not the first time Duterte cracked a joke providing quick-fix steps to deal with eruptions. While his previous jokes can pass off as gags —praying to gods, offering a sacrifice or peeing on the volcano — his latest joke did not come across as funny to other officials.

Capping a volcano is not even possible. But let’s say it was. It would still be a very bad idea.

Answering a reporter’s question at the sidelines of the inauguration of LRT 2 East Extension on Thursday, Duterte apparently sought to downplay the adverse effects of the volcanic eruption on residents already saddled by lockdowns due to the coronavirus pandemic.

“We passed by earlier, there were only a few, maybe I’ll just put a cap on its crater,” he said, referring to an aerial inspection of Taal.

The President’s joke irked many, including Sen. Panfilo Lacson, who said he did not find it funny.

READ: ‘Not funny at all:’ Lacson hits Duterte joke to cap Taal’s crater

But putting a cap on volcanic craters was actually not a new idea, according to Robin Andrews, a doctor of experimental volcanology and science journalist.

Andrews said the idea was among many questions he encounters when discussing volcanic eruptions.

In a 2017 article published in Forbes magazine, Andrews said he gets the same question mostly from adults and young students when giving a lecture or presentation in a school, institution, college, or university.

“Uninhibited by the idea that certain questions are perceived by society as ‘silly,’ they tend to throw anything at me that suddenly appears in their creative minds, What happens if you drop a nuclear bomb into a volcano, some ask,” he said.

Other queries and crazy ideas he heard were placing a gigantic umbrella over the volcano’s crater to control ash fall and if whether eruptions in moons and other planets can reach the Earth.

“Every single time that I have been to schools, however, I get asked the following question without fail: Why can’t we just plug up the top of volcanoes to stop them erupting?” Andrews wrote.

In response to what he described as a “rather excellent point,” he simply said that doing it would cause a bigger catastrophe.

According to Andrews, in some instances, the conduit or the pipe through which magma passes, can be clogged by fallen rocks due to erosion or tremors.

When this happens, he explained that it will choke the volcano and may temporarily prevent magma from spilling out and create a worse eruption.

“This will increase the confining pressure on the magma, so when it eventually does dislodge the plug, it will erupt out with greater force than normal,” he said.

“On a small-ish scale, this is known as a Vulcanian eruption. It normally happens when a chuck of rock falls down into the conduit and chokes the volcano,” Andrews said.

“When rising magma eventually manages to force it out, you get a significant ash column, lava bombs and perhaps a pyroclastic flow or two,” he added.

A study in Geophysical Research Letters — a peer-reviewed scientific journal published by the American Geophysical Union — found that a block in the lava flow could also cause a series of earthquakes.

Dr. Helena Buurman, of the University of Alaska Fairbanks, one of the researchers for the study, examined the Augustine Volcano in Alaska which in 2006 saw its north flank being blocked, which led to strong ash fall that blanketed many south-central Alaskan communities and disrupted air traffic in the region.

“We think that these earthquakes happened within the lava that was just beginning to erupt at the top of Augustine,” said Buurman.

“The earthquakes show that the lava flow was grinding to a halt and plugging up the system. This caused pressure to build up from below, and resulted in a series of large explosions 36 hours later,” Buurman explained.

“But what if your plug was really good—you glued it down to the top of the volcano and everything!” Andrews jokingly said.

In reality, closing off the volcano’s edifice—no matter how tightly sealed it is—will still cause an eruption.

The magma will, however, not shoot out from the vent. Rather, it will try to escape on the volcano’s sides which are also known as a lateral blast. 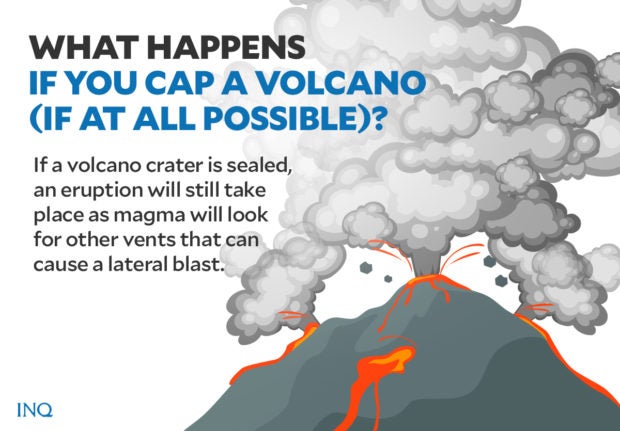 “Lateral blasts are laterally-directed thrusts of hot gas and ash that can be generated from an exploding dome on the summit vent or inside the edifice when sudden mass failure of the volcanic flanks occur,” Phivolcs said on its website.

“Lateral blasts travel at subsonic speeds at the onset, flattening everything in their paths and causing impacts similar to those of PDC (pyroclastic density currents),” it added.

A sign of possible lateral blast, as explained by Andrews, could be a bulge known as cryptodome which the United States Geological Survey (USGS) defined as a bulge on the surface of a volcano caused by a body of magma which is groaning under intense pressure inside the volcano but could not reach the surface.

“The magma chamber couldn’t get to the vent at the peak of the mountain in this case, so it moved sideways,” Andrews said.

“Pressure built up, a critical threshold was reached, the cryptodome burst, and the volcano erupted sideways,” said Andrews, detailing what happened at Mount St Helens in 1980.

Tons of ash, paired with an avalanche of hot ash, pumice, and gas from Mount St. Helens reached Washington State and killed at least 57 people, according to a report by National Geographic.

“Partly thanks to this cryptodome, the May 1980 lateral blast released as much energy as the most powerful nuclear weapon ever developed, the Tsar Bomba,” Andrews said.

“That, indeed, is why you really don’t want to put a plug into a volcano,” Andrews concluded.