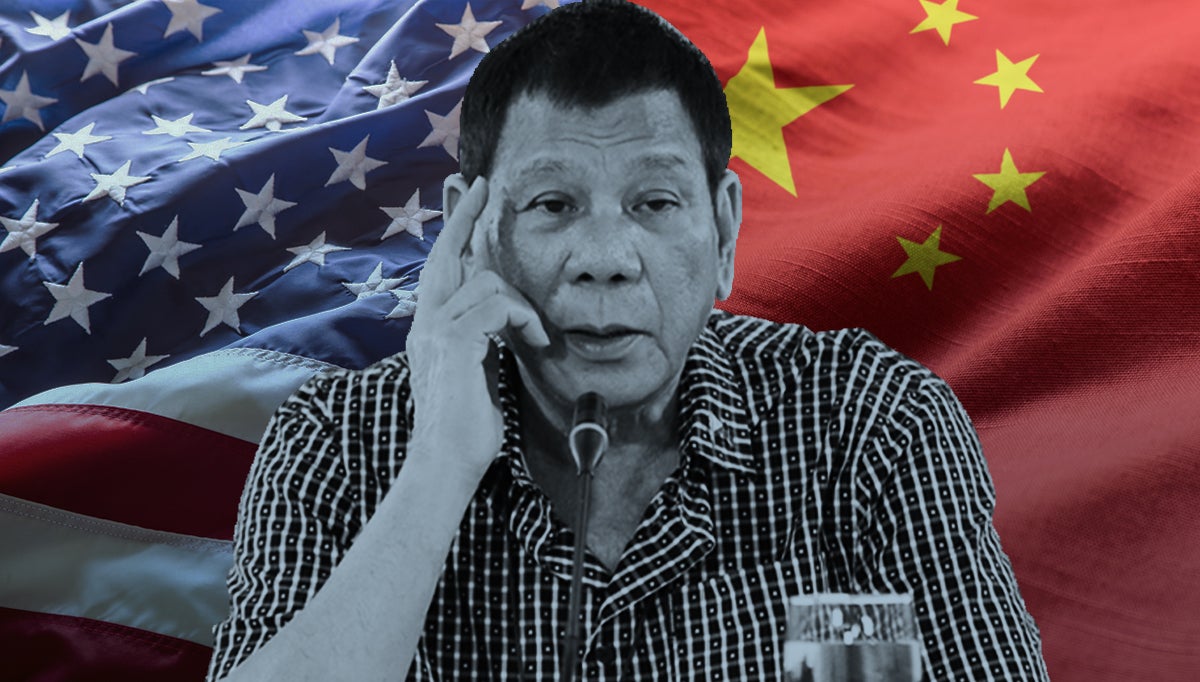 MANILA, Philippines—President Rodrigo Duterte “has no beef” with the United States. At least that’s what he told his top diplomat in Washington.

“President Duterte made it very clear to me from the very beginning that he has no beef against the United States,” Philippine Ambassador to the US Jose Romualdez told INQUIRER.net.

Back home, five years into the Duterte administration, the United States has arguably been at the receiving end of not-so-diplomatic rants and threats from Duterte more than any other country.

An international relations expert said the Philippine ruler has turned Manila into a “pariah” in terms of relations with the West, adding that the President has been “conciliatory” with China while “antagonistic” with the United States.

The fate of the Visiting Forces Agreement (VFA), a decades-old pact between long-time military allies, has been offered in exchange for various things. Be it the correction of the canceled US visa of Duterte’s close ally in the Senate or for COVID-19 vaccines.

Duterte says US will ‘have to pay’ to keep VFA

Duterte had warned—in an expletive-laden rant—that he will scrap the VFA should the United States fail to rectify Dela Rosa’s canceled visa in one month’s time.

In December 2016, only five months into his presidency, Duterte had already threatened to revoke the VFA after a US aid agency deferred funding for anti-poverty programs in the Philippines.

Duterte threatens to revoke VFA after US agency defers aid

But Dela Rosa’s visa cancelation was the “last straw.”

Fast forward to February 2020, the President pulled out from the VFA. The process of the pact’s termination, however, has been held off thrice.

While the VFA has been put on hold, Duterte demanded payments and even COVID-19 vaccines to maintain the defense agreement between the two countries.

Duterte tells US: Pay if you want VFA to stay

Duterte to US: No COVID vaccines, no VFA

Duterte’s warnings against Washington over a mere cancelation of an ally’s visa is a stark contrast with how the President deals with China, a country which has been intruding in Philippine waters, said Dr. Renato de Castro, an international studies professor at Manila’s De La Salle University.

“He ends up being very conciliatory with China while at the same time always antagonistic with the United States,” said De Castro.

“Whereas, the Chinese basically intruding into our exclusive economic zone and he’s always been conciliatory with the Chinese. How can you say it’s an independent foreign policy? Independent means wala kang kinakampihan [you’re not siding with anyone],” he added.

Romualdez, on the other hand, said the President was just being “very direct” in communicating with a “friend.”

“He has been very clear that, you know, ‘If we really are friends, now’s the time to help us with the vaccines.’ So we’ve been able to communicate that properly here in the States, telling them that we do need [vaccines] from the United States,” said the ambassador.

“We have friends like China and other countries that were able to give us vaccines when we needed it the most—which is the beginning of the pandemic but the United States has come up with it, too. Now we’re getting a large amount of donations coming through the COVAX facility, Pfizer and also Johnson & Johnson,” he added.

“I think the President just wanted to make it clear, we have a Visiting Forces Agreement…we have a long relationship, having diplomatic relations for 75 years. ‘This is the time we need you to help us’ and I think the United States have been able to come up with that,” he further said.

Duterte and his counterparts

Duterte will leave the presidency having had three US counterparts, with the first one angering the Filipino leader due to criticisms of his bloody war on drugs.

This inevitably did not sit well with Duterte, who called Obama a “s*n of a b*tch.”

Duterte to Obama:  Don’t lecture me on rights, PH not a US colony

Just before leaving for the Association of Southeast Asian Nations (Asean) Summit in Laos in September 2016, Duterte warned Obama not to lecture him about extra-judicial killings, arguing it would be a disrespect to him and to the Filipino people.

“You must be respectful. You just don’t throw questions and statements. Putangina, mumurahin kita sa forum na yan (Mother-whore, I’ll curse you in that forum),” Duerte had said.

Obama then called off a planned meeting with Duterte.

“Clearly, he’s a colorful guy,” Obama said of the Philippine president. “What I’ve instructed my team to do is talk to their Philippine counterparts to find out is this in fact a time where we can have some constructive, productive conversations.”

In 2018, Duterte changed his tune and said he had already forgiven Obama and apologized to the popular US leader.

At the time, Obama had already been replaced by Donald Trump, whom Duterte considered as friendlier to him.

“Trump is a good friend of mine,” Duterte had said.

The Filipino leader has repeatedly said he would never step foot in the US during his term as president. But Duterte’s hardline stance against visiting America softened after his “friend,” Trump, assumed the presidency.

Trump first invited Duterte over a phone call in 2017. In 2018, Duterte revealed he received a letter from Trump’s Cabinet to visit America.

In January 2020, Duterte received another invitation from Trump for the US-Asean summit, an invite the Philippine president declined.

With Duterte approaching his final year, he has yet to make an official visit to the US.

His third counterpart, President Joe Biden, who assumed office early 2021 and served as vice president under the Obama administration, had already expressed hopes to meet Duterte in person “at some point in time.”

This, however, may have to be put in the back burner since the pandemic has restricted world leaders from meeting each other face-to-face.

“But who knows, things may get better and President Biden may decide to go to Asia, which I think is probably part of the plan. And then he’ll be able to swing by the Philippines or maybe meet with President Duterte on another occasion,” Manila’s envoy to Washington said.

When one talks of Duterte’s relations with the US, the Philippine president’s pivot to China and Russia crops up.

Duterte is trying to pursue an independent foreign policy but De Castro said the President is simply “replacing one master dominant power with another.”

“It’s not independent because you’re just replacing one master, the United States, with China,” he said.

But Romualdez disputed the “misconception of many people.”

“I think an independent foreign policy really clearly is we want to be friends to all and enemies to none,” he said.

This, as he noted the need to maintain good relations with China and Russia, which have diplomatic ties with the Philippines’ since the 1970s.

“It’s been around for quite some time. It’s just a question of renewing it and perhaps making it more stable and having more exchanges in many things, most especially when it comes to economic development, which is really what the purpose was when we started to reach out to China,” Romualdez said.

“Independent foreign policy is very clear. That it’s important for us to really be able to have a dialogue, a continuing dialogue with all of these countries, like Russia and China, and keep our relationship with the United States stable and more strong,” he added.

“It doesn’t mean that we can’t go around making friends with other countries just because they may have some conflict with the United States,” he said.

Romualdez stressed that the Philippines’ relationship with the US “remains stable and strong contrary to what people think.”

“President Duterte made it very clear to me from the very beginning that he has no beef against the United States. It’s just that he feels very strongly about having a relationship with other countries like China because they’re our neighbors and that we need to reach out to them, especially with the issues surrounding,” he said.

“Before I left, I asked him ’is there any specific instructions?’ He said ‘just do your job’ and my job obviously is to make sure that our relationship with the United States remains stable and strong and I think I’m very pleased to say it remains that way,” he added.

Transforming into a ‘pariah’

But De Castro said the President has transformed the Philippines into a “pariah” in its relationship with the West.

“Because all our presidents, even up to President Marcos, always wanted to maintain that balance between the East and the West,” he said.

“He’s the most pro-Chinese,” he said of Duterte when asked how the current administration’s foreign policy differs from his predecessors.

“And of course his foreign policy has made the Philippines a pariah…We are a pariah in terms of our relationship with the West,” De Castro went on.

Balancing ties with US, China

In Duterte’s final year, Romualdez said he envisions trying to find ways to balance the country’s relations with the US and China.

“We’ve been able to make it clear to our friends here in Washington, D.C. that we are friends,” Romualdez said.

“We’re very really close but we have to try to find ways and means to be able to communicate and at the same time have good relations with countries like China, which is an not only emerging economy, but it is a powerhouse and we’re hoping that we would be able to have stronger economic ties with China,” he said.

“Number one, they’re our neighbors and number two, they obviously have economic power to be able to help us in our development projects, especially infrastructure. And I think the United States understands that very well and they don’t take that against us,” he added.