As President Rodrigo Duterte took flak on social media for his “rape joke” before the troops in Mindanao, his spokesperson on Saturday tried to spin his comment to simply mean he was “exaggeratedly describing crimes like taking a fourth wife.”

Presidential spokesperson Ernesto Abella sought to downplay mounting criticisms received by Mr. Duterte for his remark during a visit to Iligan City when he insinuated in jest that he would back them up if they raped three women, but would have them beaten up if they married four.

He suggested the President was speaking with “heightened bravado” to rally the troops and to show them he would take full responsibility for their actions while in combat.

(Just do your job. I will take care of you. I will go to jail for you. If you happen to rape three, I will own up to it. If you marry four, you will get beaten.)

The “rape joke” provoked anger and accusations of sexism against the President on social media.

Chelsea Clinton, daughter of former US President Bill Clinton and defeated Democratic presidential candidate Hillary Clinton, said on Twitter: “Not funny. Ever,” in reaction to a tweet describing what Mr. Duterte had said.

She said in a follow-up tweet: “Duterte is a murderous thug with no regard for human rights. It’s important to keep pointing that out & that rape is never a joke.” 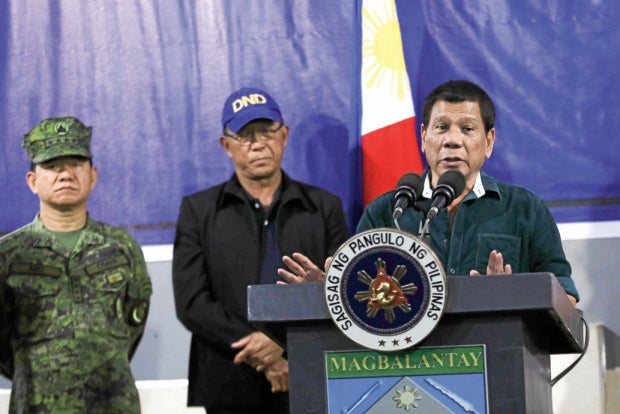 President Rodrigo Duterte attends a security briefing in Iligan City where he made his controversial rape joke. PRESIDENTIAL PHOTO

But Abella said the President’s speech was his own way of impressing upon the troops that he would take full responsibility for their actions.

“In Iligan, he  gave his full support to the men and women in uniform, taking complete responsibility for their actions, even exaggeratedly describing crimes like taking a fourth wife,” he told reporters in a text message.

“As Commander-in-Chief he would stand by his personnel and that no one will be abandoned, including the fallen,” Abella said.

Mr. Duterte “is decisively acting, speaking with heightened bravado, that law and order would be brought back in these areas of rebellion in the soonest time possible and that normalcy would likewise be restored with minimal loss of lives,” he said.

“First and foremost, the President has the whole nation’s safety and protection in mind,” he said.

This was not the first time Mr. Duterte dropped a “rape joke.”

On the campaign stump in April last year, he spoke of the rape of an Australian missionary during a prison riot when he was mayor of Davao City in 1989.

He said he had been so angry about the rape but she was so beautiful he thought “the mayor should have been first” and “what a waste.”