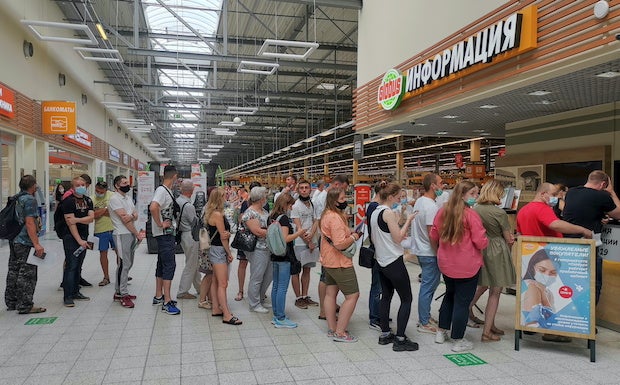 People line up to receive vaccine against the coronavirus disease (COVID-19) at a vaccination centre in the Globus shopping mall in Vladimir, Russia July 15, 2021. Picture taken July 15, 2021. (REUTERS)

Authorities said last month that Russia would fail to vaccinate 60% of its population against COVID-19 by the autumn, as had been planned, due to weak demand for the shots.

But Golikova told a televised government meeting chaired by President Vladimir Putin that 33.6 million Russians, out of a population of more than 144 million, had been vaccinated with at least one dose, while 22.6 million had had two, adding that vaccination rates had recently doubled.

That is a far lower share of the population than in Western countries.

“We have to move to reaching herd immunity of at least 80%, and we target such a task in terms of inoculation with at least the first component by November 1, 2021,” Golikova said.

That would mean that more than 115 million Russians would have immunity against the coronavirus.

A third wave of COVID-19 infections has lifted reported daily deaths in Russia to record highs in recent weeks but demand for vaccines from a wary population has finally begun to speed up with a big official push to boost uptake.

The Kremlin said last month the vaccine shortages in Russia were linked to a growing demand for shots and storage difficulties.

The government coronavirus task force said 783 people had died of coronavirus-linked causes in the past 24 hours, pushing the national death toll to 150,705.