Will Duterte get ‘sackloads of cash’ for 2022 from P40-B NTF-Elcac fund request? – solon 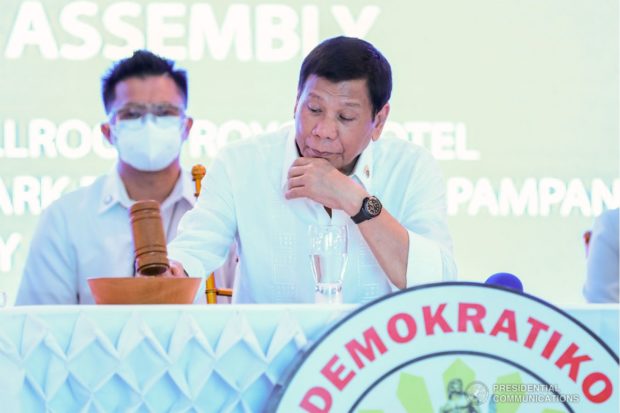 MANILA, Philippines — Will President Rodrigo Duterte get his promised “sackloads of cash” for PDP-Laban bets for the 2022 elections from the P40-billion funding requested by the National Task Force to End Local Communist Armed Conflict (NTF-Elcac)?

“It was Duterte himself who said that he would bring sacks of money for PDP-Laban candidates. It appears that he was referring to the BDP [Barangay Development Program] fund of the NTF-Elcac that they would want to really bloat in the 2022 national budget,” Gaite said in Filipino.

“We will really be on the lookout against this thick-faced [he used ‘kapalmuks’] request for P40 billion. We will not allow this to be placed in sacks marked NTF-Elcac,” he added.

Gaite issued the statement after Bayan Muna slammed the Department of the Interior and Local Government (DILG) for accusing the Makabayan bloc in the House of Representatives of spreading “fake news” about the BDP of the NTF-Elcac.

“It’s not the Makabayan bloc that’s known for spreading fake news but [Interior Secretary Jonathan] Malaya and his accomplices at the NTF-Elcac. Haven’t they been embarrassed and condemned by the public for their penchant for spreading dangerous lies and disinformation?” Gaite said.

According to Gaite, the NTF-Elcac is not focused on barangay development but rather on“widespread killings of farmers, unionists, activists and desecration of indigenous peoples, raids on homes, and planting of evidence.”

He added that the DILG development plans “would not genuinely address the question of poverty and social ills in the countryside.”

“Those infrastructure projects, if they are really being done, would just be useless brick and mortar if not coupled with economic reforms such as land distribution and development programs that strengthen the local economy,” Gaite said.

“That’s all for decoration… It may be a well of corruption and a way for Duterte’s bloc to distribute elections,” he added.

Gaite then questioned why Davao City and the Davao Region were getting huge amounts from the NTF-Elcac, though Malaya had denied that the money would be used for the upcoming presidential campaign.

“Davao Region, according to the Comelec, has the highest voting population among the regions in Mindanao with more than 3 [million] voters,” Gaite pointed out. “So it’s not for the elections? Their politicking in allotting funds stinks. They are really in election mode,” Gaited said.

During the PDP-Laban’s national assembly last Saturday, July 17, Duterte vowed to bring “sackloads of cash,” to support the party’s candidates in their campaign for the 2022 elections.

The Palace has since clarified, however, that Duterte meant getting funds from private individuals.

Esperon explains why Davao got bulk of anti-insurgency funds