Lightning kills 76 in India, including selfie-takers near famous fort 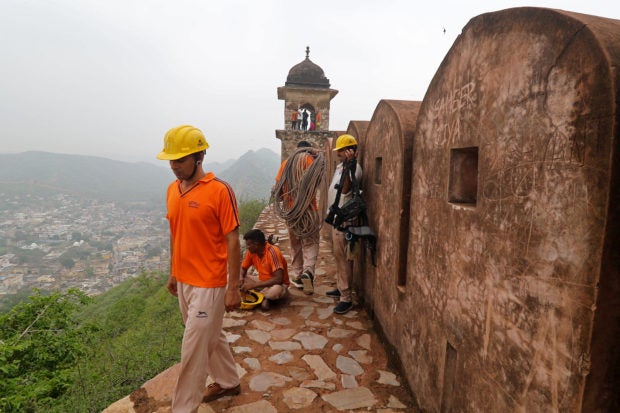 Members of State Disaster Response Force conduct a search operation near the watchtowers of the Amer Fort on the outskirts of Jaipur on July 12, 2021, after 11 people were killed in lightning strikes at the fort. AFP

NEW DELHI — Several people reportedly taking selfies near a historical fort in northern India were among nearly 80 killed by lightning strikes during the early stages of the annual monsoon season, officials said Monday.

Deadly lightning strikes are common in the vast Asian nation during the June-September deluge, which bring respite from the summer heat across the northern Indian plains.

Of the 76 killed, at least 23 people died in the mostly desert state of Rajasthan, including a dozen who were watching the storm cross Jaipur city from watch towers near the famous 12th-century Amer Fort late Sunday, a state disaster department official told AFP.

“It was already raining when the people were there. They huddled in the towers as the rainfall intensified,” a senior Jaipur police officer, Saurabh Tiwari, added.

He said up to 30 people were on the towers when the lightning struck. Emergency teams were checking if any victims had fallen into a deep moat on one side of the towers.

“Some of the injured were left unconscious by the strikes. Others ran out in panic and extreme pain,” he added.

Officials told local media some of those killed were taking selfies during the storm.

Every year, tens of thousands of tourists visit the Amer Fort, a medieval complex on a hilltop outside Jaipur also known as the Amber Fort.

People had been flocking to the fort, which gives a panoramic view of the tourist city of Jaipur, after several weeks of intense heat in the state.

In the neighboring state of Uttar Pradesh, at least 42 people were killed in lightning strikes on Saturday and Sunday, officials said. They did not give further details about where they had been killed.

Another 11 people died in the central state of Madhya Pradesh over the weekend, an official at the state’s disaster control room told AFP.

Two of them, who had taken their camels and sheep for grazing, were sheltering under a tree when they were hit by lightning, the official said.

Last month, 27 people were killed and four passengers on a flight were hospitalized after severe turbulence during monsoon storms the eastern state of West Bengal.

Nearly 2,900 people were killed by lightning in India in 2019, according to the National Crime Records Bureau — the most recent figures available.

The monsoon is crucial to replenishing water supplies in South Asia, but also causes widespread death and destruction across the region each year.