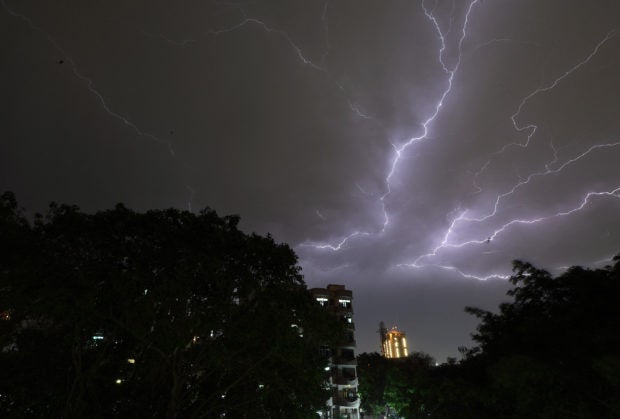 Lightning strikes over residential apartments during a thunderstorm on the outskirts of the Indian capital New Delhi on May 2, 2018. AFP FILE PHOTO

Lightning strikes during the June-September annual monsoon are fairly common in India.

Officials said West Bengal was hit by thunderstorms late Monday, with lightning strikes in parts of the state.

“Many of the 27 killed on Monday evening… in the state were farmers and working in the fields,” West Bengal disaster management minister Javed Ahmed Khan told AFP.

A flight from the western city of Mumbai to Kolkata, the capital of West Bengal, was caught in the storm as it was about to land, officials added.

Eight passengers were injured with four taken to hospital.

“One passenger is still admitted in the hospital. The others have been discharged,” the airport’s director C. Pattabhi told AFP.

“It was a close shave for the passengers.”

Prime Minister Narendra Modi announced financial compensation for the families of the victims and those who were injured.

Nearly 2,900 people were killed by lightning in India in 2019 according to the National Crime Records Bureau — the most recent figures available.

The monsoon is crucial to replenishing water supplies in South Asia, but also causes widespread death and destruction across the region each year.