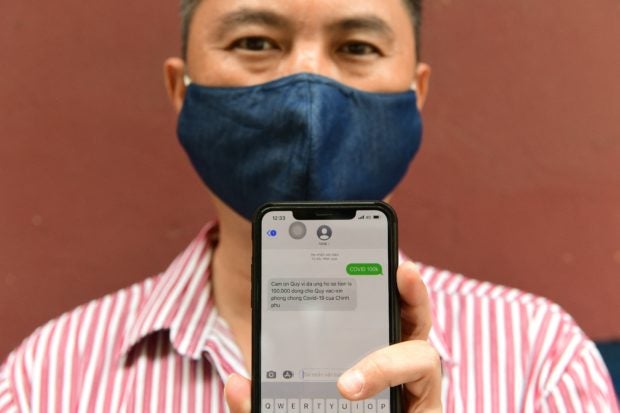 HANOI — Vietnam, once a model for its successful handling of the pandemic, has started asking for public donations to buy vaccines as it struggles to contain a new coronavirus wave.

The Southeast Asian country has vaccinated only about one percent of its population of nearly 100 million, and authorities have become increasingly alarmed by a recent spike in cases.

Since last week, mobile phone users have received up to three text messages urging them to contribute to a Covid-19 vaccine fund, while civil servants have been encouraged to part with a day’s pay.

Some residents, fearful of the virus’ impact on Vietnam’s economy — one of the few in the world to expand last year — told AFP they support the fundraising drive.

Nguyen Tuan Anh, a civil servant, told AFP he had sent around $50 via bank transfer and SMS payment, as vaccines would mean “Vietnam’s economy will be stable and develop again”.

Vietnam’s industrial northern provinces — home to key factories such as Samsung and Foxconn — have been particularly badly hit by the latest outbreak.

Across the country, tens of thousands of people have lost their jobs, according to state media, with bars and restaurants forced to close in major hubs such as Hanoi and Ho Chi Minh City and public gatherings cancelled.

Cases have more than tripled since April to reach almost 9,000. Although the number is low in comparison to most of its Southeast Asian neighbors, Vietnam’s vaccination rate per capita is the lowest in the region, and among the lowest in Asia, according to an AFP tally.

The communist government has said it aims to secure 150 million vaccine doses this year to cover 70 percent of its population — at a cost of $1.1 billion.

But only $630 million has been allocated to vaccine procurement in the budget.

A financial “contribution from the community and society” is needed to make a mass roll-out possible, Prime Minister Pham Minh Chinh told the nation on Saturday during a live broadcast to launch the campaign.

By Tuesday, more than 231,000 individuals and organizations had donated $181 million to the campaign.

Another $140 million has been promised by businesses, the Ministry of Finance said.

However, the campaign has been shunned by some who are concerned with how the money will be spent.

“I am not sure if the donated money will be used for the sole purpose of buying vaccines to inoculate every citizen…I don’t think I have enough trust to give them my money,” said office worker Pham Mai Chi.