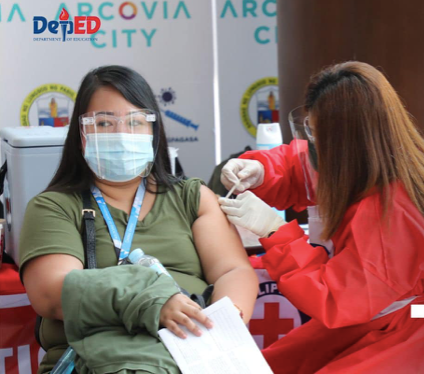 Vaccination of DepEd personnel in collaboration with the Pasig LGU. Image from Facebook / DepEd Philippines

MANILA, Philippines — Some 790 Department of Education (DepEd) from the agency’s central and Mimaropa offices have received their first COVID-19 vaccine dose.

The said personnel, included in the government’s A4 vaccine priority list, were inoculated in coordination with the local government of Pasig City, DepEd said in a statement Tuesday.

DepEd added that more personnel from its central office and the Mimaropa regional office, which is located in Pasig, will be receiving their anti-COVID shot in the following days.

“This is a step to make sure that our employees will be able to serve our stakeholders with an added layer of protection against the virus,” Education Secretary Leonor Briones said.

The DepEd employees who received their shots were screened before the actual day of vaccination in accordance with vaccination protocols of the Department of Health.

According to DepEd, organizers of the initiative also ensured that all participants expressed their willingness to be vaccinated.

Teachers and frontline personnel in basic education and higher education institutions and agencies were previously under the B1 category of the priority list. They were eventually moved up to the A4 group.

The government earlier said it plans to complete the inoculation of all economic and government frontliners, including DepEd personnel, by the end of August.

As of July 11, a total of 191,851 individuals under the A4 category have already been fully vaccinated against COVID-19. — Faith Yuen Wei Ragasa, Inquirer trainee