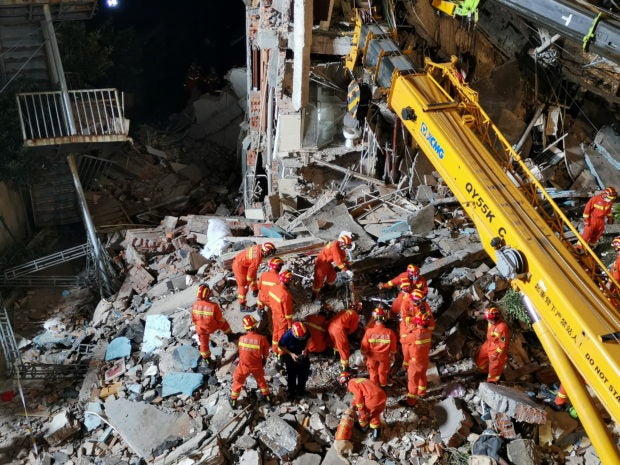 Rescue workers work next to a crane at the site where a hotel building collapsed in Suzhou, Jiangsu province, China July 12, 2021. REUTERS

SHANGHAI — Part of a hotel collapsed in the Chinese city of Suzhou killing eight people and rescue workers were searching on Tuesday for nine people missing in the ruins, state media reported.

The collapse of part of the Siji Kaiyuan Hotel in the coastal city happened on Monday afternoon. The Ministry of Emergency Management sent a team to help with the rescue work, media reported.

The cause of the collapse was under investigation, the Xinhua news agency reported. It published photographs of rescue workers combing through rubble in the search for survivors.

The Siji Kaiyuan is a budget hotel that opened in 2018. The part that collapsed was three stories tall while an online booking site said the hotel had 54 rooms.

Read Next
OCTA: Vaccinating 90% of seniors lessens deaths; doable by July, August
EDITORS' PICK
97% of COVID-19 beds at PGH currently occupied
Gear up and get ready to play with Yamaha Mio Gear
Acer starts the year off strong with the Aspire Vero National Geographic Edition
Japan brings back virus restrictions over Omicron surge
Over 3 Million worth of prizes to be won at Smart Padala’s SENDali Manalo Promo!
Uproar over no vax, no ride policy: Maybe it’s time for gov’t to say sorry—Bello
MOST READ
1Sambayan names 7 aspirants in its 2022 Senate lineup
Emma Stone calls Andrew Garfield a ‘jerk’ after he ‘lied’ about his ‘Spider-Man: No Way Home’ appearance
Guevarra to Acosta: Obey rules on unvaccinated
PH to import 60,000 tons of fish to cover shortage
Don't miss out on the latest news and information.