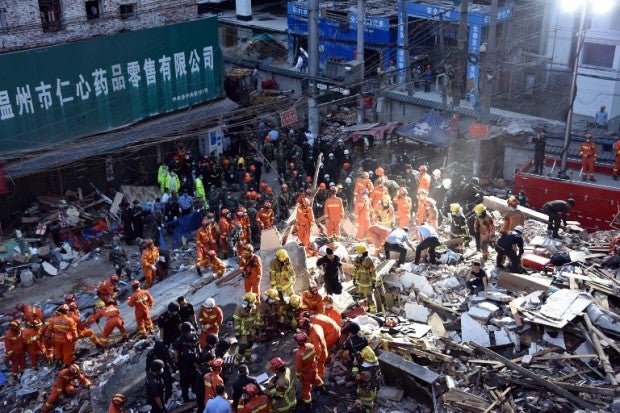 Rescuers search for survivors at an accident site after four buildings caved in during the early hours in Wenzhou, eastern China’s Zhejiang province on October 10, 2016. At least 20 people were killed when the buildings that housed migrant workers collapsed, the official Xinhua news agency said. AFP

BEIJING, China — A series of multi-story buildings built by local villagers and packed with migrant workers collapsed in China on Monday, killing at least 20 people, the government and reports said.

Four residential buildings caved in during the early hours at Wenzhou in the eastern province of Zhejiang, the Lucheng district government said in a social media posting.

Some 20 people have been confirmed dead and six rescued, the official Xinhua news agency reported, but without giving indications of total numbers missing.

Pictures from the scene showed workers in orange suits sifting through a mountain of rubble.

Xinhua said earlier that rescuers were still verifying the number of people trapped under the debris.

But it cited survivor Yan Yongfa, a 57-year-old migrant worker, as saying that each room housed at least two to three people — many of them migrants like himself.

Yan lived with four other workers in a room rented for them by their boss.

Hundreds of millions of people have moved from China’s countryside to its towns and cities in recent decades, their labor fueling its economic boom.

Hundreds of millions of people have moved from China’s countryside to its towns and cities in recent decades, their labor fueling its economic boom.

But many remain poorly paid and face restrictions on buying homes in the areas where they work.

The cause of the collapse was still under investigation.

“To protect those who are trapped, we are mainly digging with our bare hands so that work is going slowly,” fire department officer Sun Jing told Xinhua, adding that the debris was piled three stories high.

Neighboring buildings constructed in the 1970s were being demolished to prevent further collapses, the agency added.

China has seen several building collapses in recent years, with some blamed on low-quality construction.

In May 16 people were reported dead after a residential building in Guizhou province in the southwest collapsed due to landslides.

Two people were killed and 24 injured in April when a storm brought down a wholesale market building in Foshan city in the southern province of Guangdong. CBB