A medical technologist in Surigao del Sur has gone beyond the call of duty when she decided to continue working on an urgent laboratory request as fire raged near the hospital where she works on Monday (June 28).

Jeia Pigte Guinge, 23, who works at Adela Serra Ty Memorial Medical Center (ASTMMC), has an ongoing crossmatching test for a newborn patient when fire hit a bunkhouse at the back of the hospital’s annex building around 7:35 p.m.

Guinge just kept working, oblivious to the danger from the fire. Her selfless dedication to work went viral on social media and photos of her working while flames danced outside the hospital window won the hearts of netizens.

The photos were uploaded on Facebook by Guinge’s colleague, Stefan Balani, who had just finished his duty when the fire broke out. 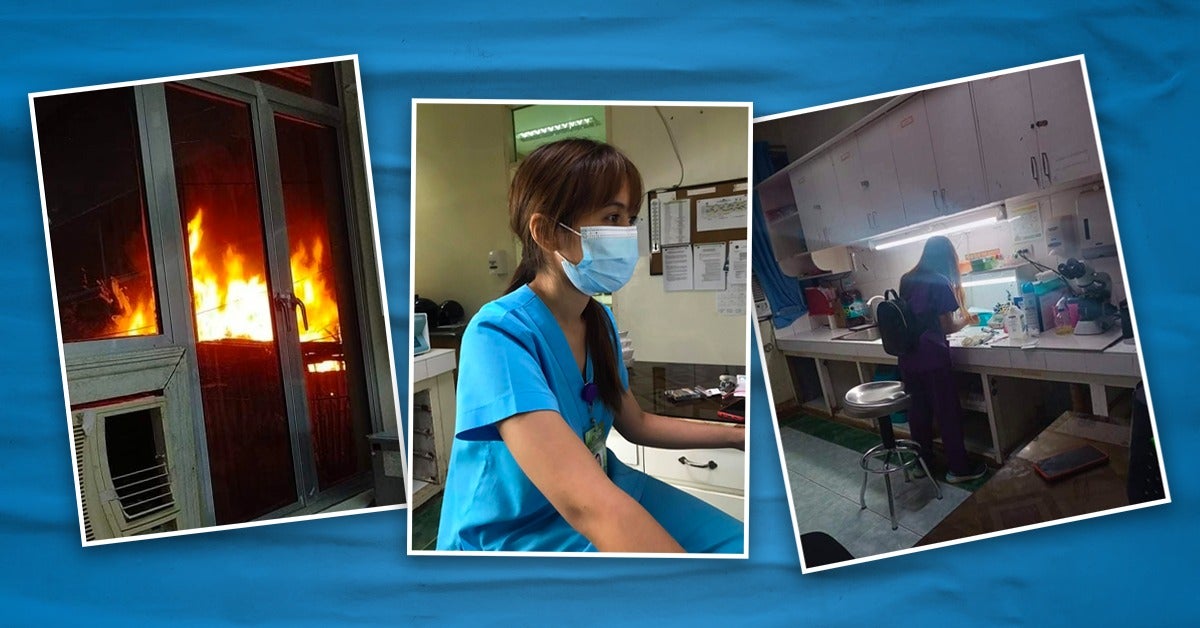 A medical technologist in Surigao del Sur has gone beyond her call of duty when she decided to work on an urgent laboratory request in spite of a fire that broke out near the hospital building on Monday, June 28. Photos courtesy of Jeia Pigte Guinge and Stefan Balani/Facebook

“This happened few moments after my duty but one brave colleague chose to stay and continue crossmatching blood for a newborn patient,” Balani wrote in his post.

“The real ‘call of duty,’ all in the name of saving the lives of others,” Balani added, acknowledging Guinge’s bravery. The viral post has now amassed more than 4,900 reactions, 150 comments, and over 2,500 shares as of this writing.

Guinge has been working in ASTMMC since February 10, 2021. She previously worked as a surveillance officer at the office of the Department of Health in the province.

In an interview with INQUIRER.net, Guinge said she was the only staffer on duty that night in the station. A colleague from the morning shift endorsed to her a STAT (urgent) crossmatching request for a six-day-old patient, so she immediately processed the patient’s blood sample that was given to her.

She said she was not aware of the blaze at that moment as she had already begun with the crossmatching procedure and her mobile phone was in her pocket so she did not notice what was happening around. Until someone called on the workstation’s landline and informed her about the fire.

Guinge tried to find out the location of the fire by checking the hospital rooms until she found that it was right at the back of the hospital pantry. She immediately put out her phone and took a photo of the fire, which she sent to a group chat to also inform her colleagues.

“Then, I went back to my workstation and that was it, I thought of the best thing to do because the crossmatching has already started and it was difficult to discontinue the process, so I decided to do it until the incubation process since there are only a few more steps left. I will just get back to the other steps and I went out already,” she said in Filipino.

One of the senior staffers also came by as soon as firefighters started putting out the fire. Guinge said she went into the center’s blood bank to get other important files and reports, and after that, she went straight back to the workstation as the incubation period was done. Then, as soon as she finished the entire test, she went out of the workstation.

In moments like this, when people come face-to-face with life-threatening situations, they tend to respond differently as responses become survival mechanisms. Health workers often go above and beyond the call of duty when providing patients care and even while they themselves are battling fear and anxiety.

Guinge, asked what advice she can give fellow health workers caught in a similar situation, said the choice boils down to ‘fight or flight.’ She said it was a natural response to a life-threatening situation like what she had been through that night. It is common for health workers to have the desire to help and provide the immediate needs of patients, she said.

“In this situation, I think I just did what I thought was right,” Guinge said. “I was not driven by my panic and I just kept calm. I just put my trust in Him and God did not disappoint me because He saved me and He saved the baby,” she said.

Through her viral photo, which was uploaded on social media platforms, Guinge said she also hoped to inspire everyone to donate blood, be a “modern-day hero,” and help health workers save more lives.

ASTMMC officer-in-charge Janice V. Pagaran-Alcordo, in a statement, confirmed the fire at the bunkhouse built by construction firms working on a building project at the back of the hospital.

Alcordo said the hospital appreciated the heroic deeds and bravery of employees and others in keeping things under control during the fire.

A report by the Bureau of Fire Protection in Tandag City said the bunkhouse fire has grown when firemen arrived at the scene, prompting an immediate firefighting operation. The fire was declared out around 7:45 p.m. but what caused it was still being investigated.

In a Facebook post on Wednesday (June 30), the city government of Tandag commended Guinge for being an “epitome of dedication, hard work and public service.”

Health workers’ kin can now get jabs vs COVID-19