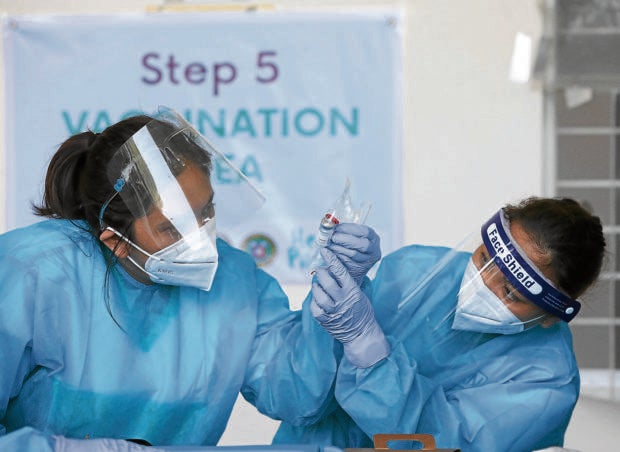 The P9-billion special risk allowance approved last week by the Department of Budget and Management (DBM) and due to be released this Wednesday will only cover health workers exposed to COVID-19 patients and not other public health workers, a health-care group pointed out on Monday.

Still, the Alliance of Health Workers (AHW) welcomed the cash release, which the group’s president, Robert Mendoza, said “was a result of our protests and dialogues with the DBM and the DOH (Department of Health).”

But Mendoza also asked about the other earmarked allowances, such as the P300-million meal, accommodation and transportation (MAT) allowance under the Bayanihan to Recover as One (Bayanihan 2) stimulus package, which expires on Wednesday.

The MAT refers to workers’ allowance in DOH-run hospitals from September to December last year.

“We heard through some hospital unions that the DOH was willing to give back only 30 percent of the MAT. So for example at Fabella (Dr. Jose Fabella Memorial Hospital), they would get only P22.3 million instead of P59 million. But still, there’s nothing black and white,” Mendoza said in a phone interview.

Also reached for comment, Sean Velchez, union president at the Philippine Orthopedic Center, pointed out that, “Unfortunately, [the allowance] is exclusionary, when everyone breathes the same air.”

“COVID is airborne and we hope everyone, from administration to dietary, ancillary, nursing, etc., who keeps the hospital running should receive the benefit,” he said.

Toledo said the allowance was not released previously “because this fund only intends to augment the budget of government hospitals who have encountered budget deficiencies.”

The special risk allowance for each health worker amounts to P5,000 for 22 days of duty. The allowances cover the period of Dec. 20 last year up to this Wednesday.

AHW clarified that the allowance only covered public hospital workers—those working in hospitals run by the DOH or by the local governments, and government-hired health workers deployed to private hospitals to handle COVID-19 cases.

Another allowance under Bayanihan 2 that hospital unions want released is the P3,000 COVID-19 risk allowance, which is apart from the allowance approved by the DBM.

In its statement on Monday, the Healthcare Professionals Alliance Against COVID-19 (HPAAC) called on Congress to hold special sessions to extend Bayanihan 2.

On June 2, the House of Representatives approved a second extension of Bayanihan 2, but only on second reading before it went on recess on June 5.

The Bayanihan 2 fund was first extended in December last year due to its slow release.

According to HPAAC, a P6.6-billion fund appropriated for laboratory tests, contact tracing and other pandemic response interventions is due to expire unless the stimulus package is extended.

Pointing out precisely that billions of pesos were yet to be spent in the soon-to-expire fund, the Makabayan bloc of lawmakers in the House is seeking to institutionalize the granting of special risk allowances to health workers and has filed House Bill No. 9640 for that purpose.

In a statement, House deputy minority leader and Bayan Muna Rep. Carlos Isagani Zarate said, “We in Congress are calling for a special session and we hope that Malacañang would heed the call of [the] health workers.”

“There are still at least P18.4 billion in the Bayanihan 2 that can be used as a start to compensate our health workers and this can still be done by extending the effectivity of the law,” he said.

“As they take care of us and risk their lives doing so, we should also take care of all our health workers. Calling them as heroes but treating them shabbily is not right and must be corrected,” Zarate said. INQ