Noynoy Aquino remembered for legacy of peace in Mindanao 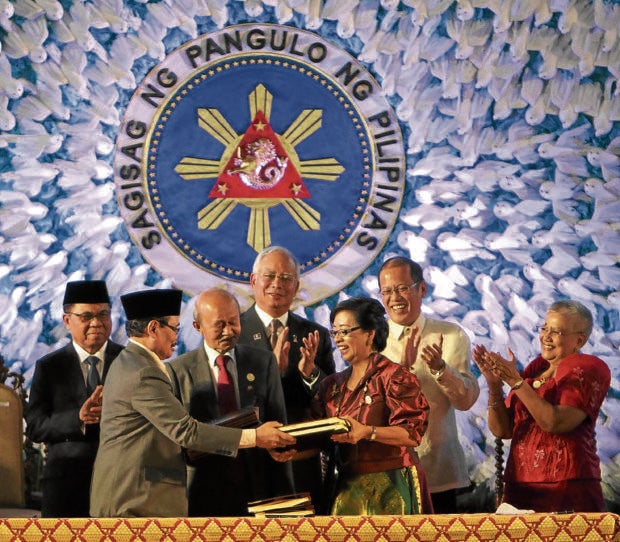 MAJOR ACHIEVEMENT The signing of the Comprehensive Agreement on the Bangsamoro in 2014 between the Philippine government, represented by chief negotiator Miriam Coronel Ferrer (right, front), and the Moro Islamic Liberation Front, represented by its peace panel chair Mohagher Iqbal (left, front), is among the most important achievements of the administration of then President Benigno “Noynoy” Aquino III (second from right). —LYN RILLON

On Sept. 3, 2009, Benigno “Noynoy” Aquino III met with a handful of civil society leaders and peace advocates in Davao City. Then a senator, he was still thinking about a possible run for the presidency.

Patricia Sarenas of the Mindanao Coalition of Development NGO Networks remembers how they impressed upon Aquino the peace and development concerns in Mindanao, particularly in the Bangsamoro areas. They asked him to promise them that he would be a “President for Mindanao.”

“That day, I believe, was when he first realized how important Mindanao is because until then, he seemed to be uninterested [in the issue] and did not feel it,” Sarenas says.

Aquino’s reflection tour took him to Cagayan de Oro City on Oct. 29, 2009, with the Balay Mindanaw Peace Center as host. He wrote on a souvenir of the visit: “So long as we hold on to our hopes and continue to fight for other’s interests, reaching the goal of peace is a certainty.”

“We would not have the Bangsamoro that we have today were it not for him,” former presidential peace adviser Teresita Quintos Deles told ABS-CBN News Channel in an interview about Aquino’s legacy.

Other key provisions of the peace deal were a recognition of Moro identity and acknowledgment of historical injustices through succession of government actions and policies that disfavored and discriminated against the Moro people.

The CAB was the basis for enacting the Bangsamoro Organic Law (BOL), the charter of the Bangsamoro Autonomous Region in Muslim Mindanao (BARMM) which became a reality on Jan. 25, 2019, when the law was ratified in a plebiscite.

There was a “very high distrust and disappointment” and also “escalated violence” even as the process had already gone on for 13 years by 2010, Deles recalls.

“He took positions, he took risks. He understood what the problems were. He understood that this [peacemaking] was a historical obligation,” she says.

But by the time Aquino took power, Deles says he already had a broad blueprint in hand from a policy brief on the peace process and security sector reform she was asked to prepare.

He understood that the Moro insurgency was “a problem that was festering and holding back Philippine progress,” says Deles, but his administration made sure that the process built on the gains of the 1996 peace pact between the government and the Moro National Liberation Front.

“He brought over the entire government to this goal. He exacted due diligence from all of us, the same rigor he imposed upon himself for any policy decision he had to make,” Ferrer said.

“He knew the need to get all around support, telling us to address all the unknowns that create all sorts of fears around the Bangsamoro question. He wanted a just and honest deal. His injunctions: commit to what we can implement, implement what we commit; learn from the lessons of the past,” she said.

On Thursday, the interim Bangsamoro parliament passed a resolution honoring Aquino, lauding his legacy of empowering the Moro people.

One of the most enduring peacemaking images of Aquino is when he announced the forging of the Framework Agreement on the Bangsamoro (FAB) on Oct. 7, 2012, with his full Cabinet in tow.

The FAB, which now Supreme Court Associate Justice Marvic Leonen negotiated for the government, served as the architecture of the eventual peace deal.

When the document was signed on Oct. 15, 2012, Aquino remarked: “I understand the temptations that can be borne of anger. I myself lost my father to an oppressive system; I myself thirsted for justice and was deprived of it then by the dictatorship. I empathize with our Bangsamoro brothers and sisters, and can only vow to work as hard as I can to see that the culture of impunity is dismantled, and that the foundations of righteousness and cooperation are laid. We will give our people what is truly due them: a chance to direct their lives toward advancement in a democratic, peaceful and safe society.”

To this day, Sarenas considers the 2009 Davao meeting “auspicious.”

“That day, we believed that he would be president for (my granddaughter) Kyra and all the children born in Mindanao who claim that Mindanao is the land of their birth!”