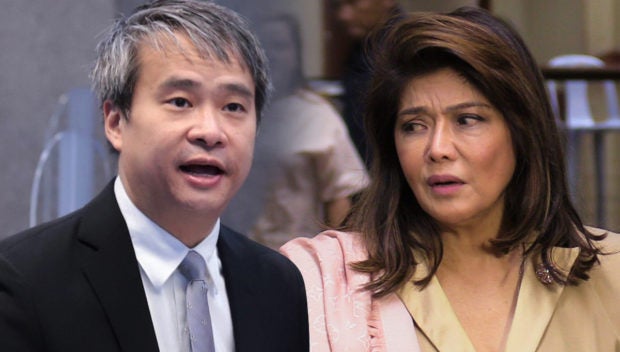 MANILA, Philippines — Senators Imee Marcos and Joel Villanueva have requested the inclusion of government media workers in the proposed law that aims to provide enhanced protection, security, and benefits for media personnel.

During the hearing of the Senate committee on labor, employment, and human resources development on the proposed Media Workers’ Welfare Act, Marcos asked why the proposed law only covers media workers in the private sector.

“I would like to understand very clearly the coverage by all media workers and entities in the private sector… Nagtatanong din ‘yung nasa government sector, bakit hindi sila kasali samantalang media rin naman daw sila (Others in the government sector also ask why they are not included even if they are already part of the media)?” she said.

Villanueva, chairman of the committee, echoed the same point raised by Marcos.

“I would confirm what Senator Imee mentioned because when you look at Senate Bills No. 1820 and 2021, excluded ang media workers in government stations such as PTV-4, so perhaps we could also bring up the issue if there is indeed substantial basis for the difference in treatment between private sector media workers and those in government media outlets,” he said.

In response, Atty. Perry Solis of the Presidential Task Force of Media Security said there might be issues in including the government media workers in the proposed law because they are covered by the Civil Service Act and not by the Labor Code, unlike private workers.

(That’s the issue why their agreement in the House of Representatives is to remove for the meantime the government employees because the Labor Code and Civil Service are different.)

Villanueva, however, called this a “flimsy excuse.”

“It’s unfortunate that we are hearing this. I am sorry. It’s a flimsy excuse that we cannot include the media workers working in the government only because of our Civil Service Act. Alam natin na magiging unfair ito (We know this will be unfair),” he pointed out.

Marcos likewise opposed the reason mentioned by Solis for the non-exclusion of government media workers.

“The other issue is you failed to include the government sector simply because we can’t find a solution to conforming to the civil service and salary grades. But by doing that, you are excluding a very poorly paid group as well as saying that the government is the chief violator of the Labor Code. Parang mali naman ata ang dating nun (This seems wrong),” she said.

Villanueva said the matter will be discussed in another hearing or during the meeting of the technical working group.

A counterpart of the proposed law was approved at the House of Representatives in January this year.