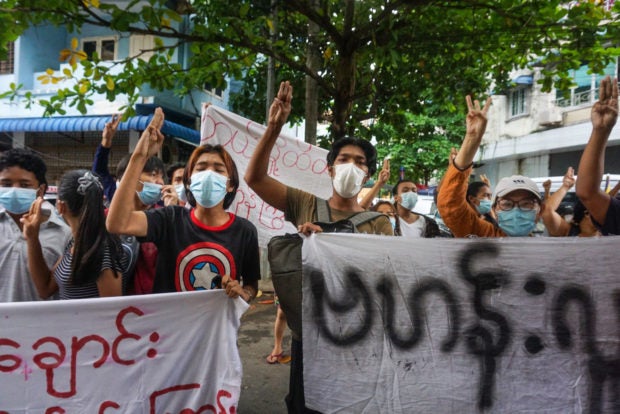 Protesters make the three-finger salute during a flash mob demonstration against the military coup in Yangon on June 25, 2021. AFP

WASHINGTON — A new report from the International Crisis Group (ICG) describes increasing lawlessness and chaos in Myanmar as conflict in the country spreads since the Feb 1 coup, with armed militias proliferating in both rural and urban settings.

Some of these militias, armed with hunting rifles and other makeshift weapons but increasingly obtaining better weaponry, have inflicted serious casualties on the military, or Tatmadaw.

“The regime’s heavy-handed, indiscriminate retaliation has displaced tens of thousands of men, women and children,” said the ICG report, titled Taking Aim At The Tatmadaw: The New Armed Resistance To Myanmar’s Coup.

“Local networks and humanitarian agencies are unable to adequately assist these people due to security and access restrictions, including military arrests, confiscation of supplies and killings of those trying to deliver aid.”

The report warned: “The fast emergence of militias, and their capacity to evolve from loosely coordinated groups of local people into more structured, better armed and sustainably funded forces, likely marks a new phase of Myanmar’s decades-old civil war.

“Given the deep grievances in areas such as Chin and Kayah states – about the coup, but also over decades of neglect, ethnic discrimination and denial of rights – these militias are unlikely to simply disband or quickly fade away.

“They constitute new fronts for the Tatmadaw, which will probably keep blindly lashing out at civilians, as it has done repeatedly in the past when fighting many of the country’s ethnic armed groups.

“While these militias generally express support for the National Unity Government, the civilian body that has emerged to contest the junta’s claim to rule, they are not under its command or control.”

Mr Richard Horsey, a former top United Nations official in Myanmar, now a senior adviser on Myanmar to the ICG, noted in an interview that militias have proliferated in urban centers as well, though their nature differs from those in rural areas where there has long been more conventional armed conflict with ethnic minorities.

“They are also very, very active. It’s a little bit of a different phenomenon from the kind of villagers with hunting rifles. There (is a) different modus operandi, a different objective, a different set of risks,” Mr Horsey, who authored the ICG report, told The Straits Times.

“What we are seeing in urban areas is more a guerrilla-style activity, explosions, assassinations, covert actions, rather than mass fighters.”

These militias are not necessarily all anti-military. The landscape is devolving into a lawless, every-person-for-himself situation in which those with the means and the motivation are forming what amounts to private militia.

“There are counter militias, set up to defend USDP people, village administrators, ex-military who feel like they could be assassinated at any time and who feel the state can’t protect them,” Mr Horsey added.

The USDP is the military’s Union Solidarity and Development Party, which has been losing resoundingly in elections to the National League for Democracy whose leader, former state counsellor Aung San Suu Kyi, is in detention facing an array of charges.

The military claims its Feb 1 coup was a response to widespread electoral fraud. But the coup re-ignited conflicts with ethnic armed organizations on the periphery, as well as massive civil disobedience in major cities across the country.

More than 870 people have been killed by security forces and more than 6,000 detained since the coup, according to the Assistance Association for Political Prisoners advocacy group.

People with USDP or other military connections are certainly targets for the resistance. “Therefore they’re resisting the resistance,” Mr Horsey said. “But they’re not really set up to defend a coup, they’re set up to protect vulnerable people.

“That’s a real fragmentation of society. You’re now getting… a collapse of law and order. It’s chaotic – that’s how I would describe it. It’s really hard to keep on top of and understand the dynamics – and they are very different in different communities at different times.”

He added: “It’s a failed state by many measures. The state can’t guarantee basic law and order, rule of law. It can’t deliver public services, health and education.”

This has been the case in conflict areas for many years, with many border zones run by de facto local autonomous ethnic organizations backed by their own armies; the Karen National Union is one example of several. But this is a new phase in the country’s decades-old civil wars.

“Once society crosses a certain threshold of violence, once there are these violent actors out there, trying to overthrow the existing order for very understandable reasons, once you set people to that task with violence, and if you don’t have checks on that violence and limits on it, we know where this can go,” Mr Horsey said.

“You unleash forces that you can’t then later control. You create a group of violent armed people who feel that they are somehow entitled to be the judge, jury and executioner, because that is what these gangs (in urban areas) are doing.”

The ICG report said: “The Tatmadaw must meet its international obligations to respect the proportional use of force, distinguish between combatants and civilians, and allow unimpeded humanitarian access to those displaced.

“Outside actors have a responsibility, including in the UN Security Council, to ensure the regime faces consequences.”