Moria and Jaya were invited by Aquino’s sister, actress Kris Aquino, to perform at the Church of Gesù on Friday.

Moira sang a rendition of her famous song Paubaya — with lyrics modified to pay respect to the late leader.  Jaya then performed a Celeste Legazpi classic in Minsan ang Minahal ay Ako, which Kris said was one of her brother’s favorites.

“The whole of last night, while we were in Heritage, hinahanap ng staff there’s one song in particular that Noy had been listening to over and over again, and I was told that it was his favorite.  And I think we spent three hours trying to research the song, it was originally done by Celeste Legazpi but it was the Aiza Seguerra version that Noy had liked so much,” Kris said at the podium.

“I had only called at 10 am, and inaral ni Jaya to be able to sing it for all of us right now and to make Noy happy.  And before that though, on the spot, it was her biggest hit but she re-wrote the lyrics actually, gusto kong magpasalamat kay Moira because she re-wrote the lyrics so that it could be dedicated to Noy,” she added.

He was known for his love of music, with accounts from his friends of the wide range of music he enjoyed. 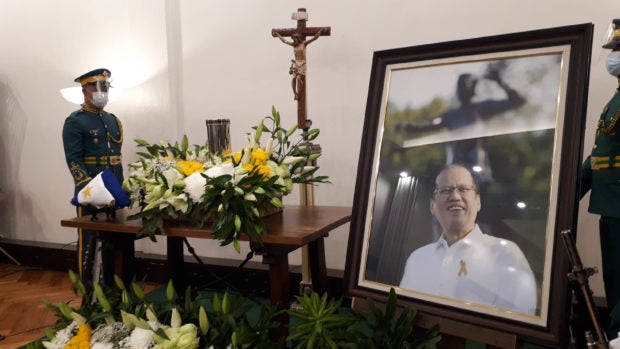 Aquino died on Thursday morning, with his sisters announcing that it was due to renal disease secondary to diabetes.  Aquino’s sister Pinky Aquino-Abellada read a statement on Thursday afternoon, confirming that the former president died peacefully in his sleep, before he was rushed to the Capitol Medical Center.

Earlier, the Aquino family announced that a funeral mass would be held at 10:00 a.m. at Church of Gesù also, which would immediately be followed by a procession towards the Manila Memorial Park in Sucat, Parañaque.

“The schedule of the funeral mass of President Benigno S. Aquino III will be at 10:00 AM tomorrow, Saturday, 26 June, at the Church of the Gesu at the Ateneo De Manila University. The mass will be presided by Archbishop Socrates Villegas, together with his brother priests,” the Aquino family said.

“The urn of President Aquino will depart immediately after the mass and will be brought to the Manila Memorial Park in Sucat, Parañaque. The President will be laid to rest next to his parents,” they added.