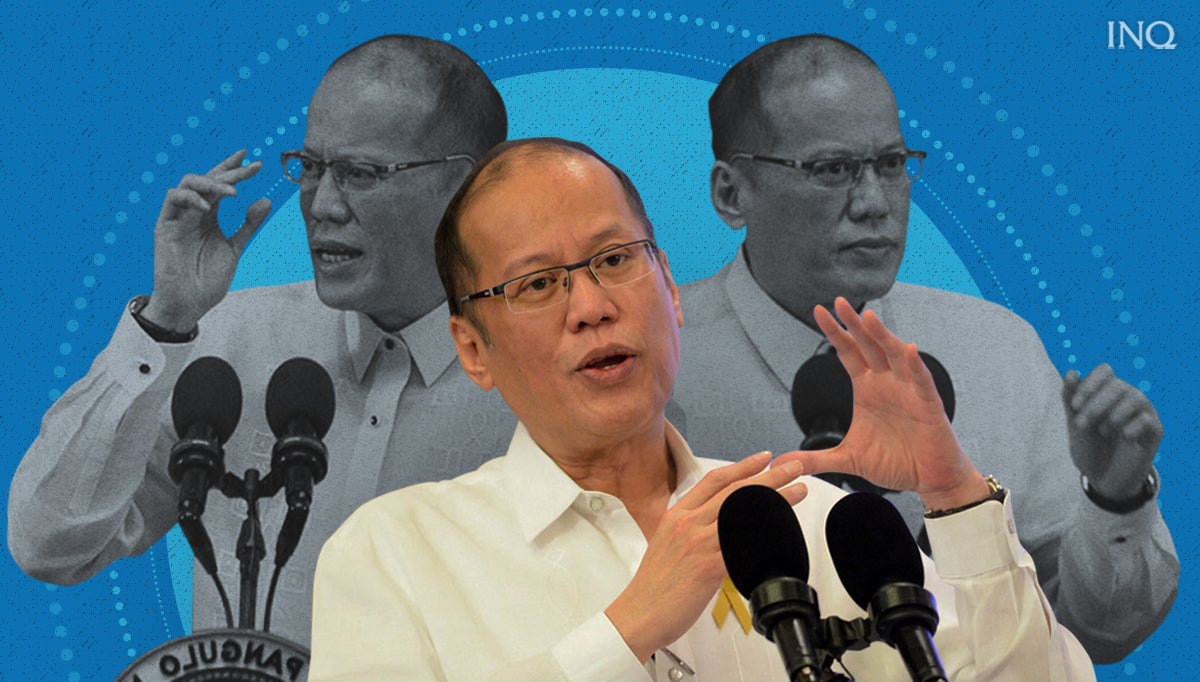 MANILA, Philippines—What Benigno S. Aquino III achieved as President from 2010 to 2016 could vary depending on which side of the current political fence the observer is standing.

But data from the government and other records would show numbers that could speak on their own about the late former President’s governance.

During Aquino’s term, the Philippine economy had its time in the spotlight with numbers not seen before.

From a 3.6 percent growth in 2011, GDP grew by 6.8 percent in 2012 and further increased to 7.8 percent in the first quarter of 2013—the highest growth rate under Aquino and faster than that of China’s, Indonesia’s, Thailand’s and Vietnam’s for the same period. 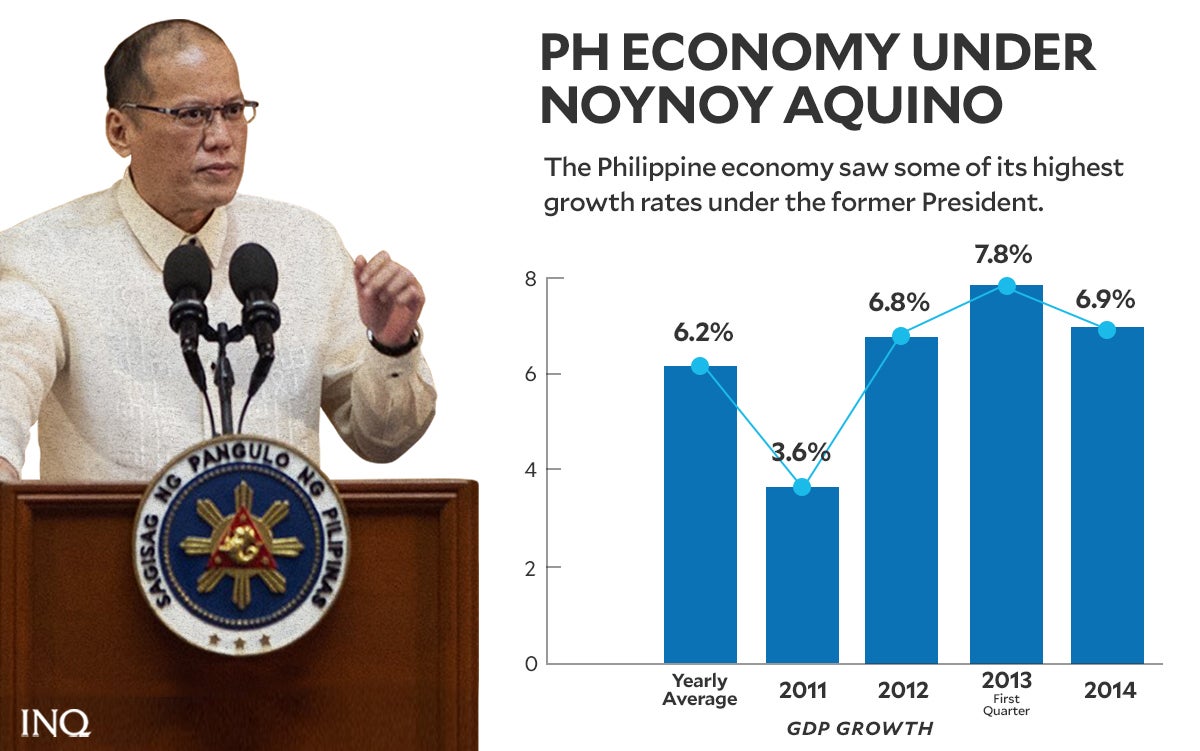 In 2016, a few months before Aquino stepped down, Philippine economic growth was 6.9 percent, the fastest among 11 Asian economies during that year’s first three months. 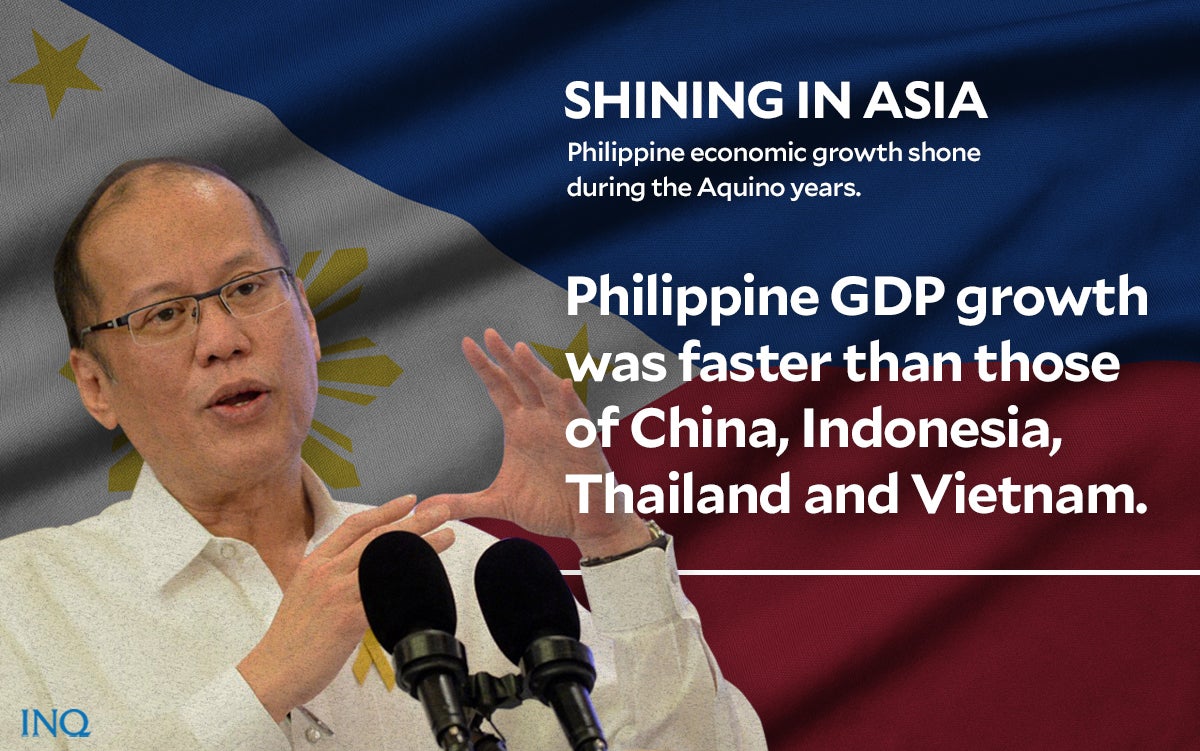 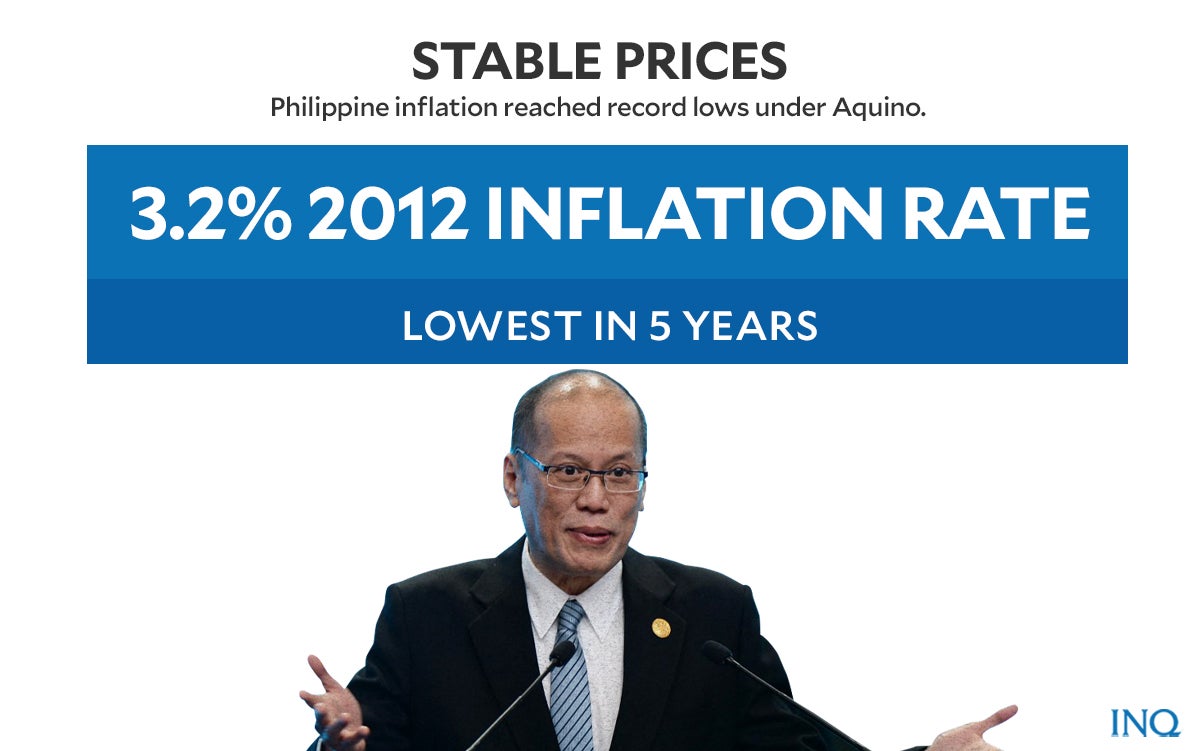 Prices had been stable for most of the time under Aquino. Average inflation rate dipped at 3.2 percent in 2012, the lowest in five years.

The Philippines also got its first investment-grade credit rating of BBB- from Fitch Ratings and Standard & Poor on March 27 and May 2, 2013.

The Japan Credit Rating Agency Ltd. (JCR) also raised its rating for the Philippines by a notch from the minimum investment grade of BBB- to BBB in the same year.

In 2015, the Philippines secured its highest credit score from JCR at BBB+ or just a notch below the minimum in the “A” category sovereign rating.

The Philippines’ ranking in the World Economic Forum’s (WEF) Global Competitiveness Report also consistently improved under Aquino. The global competitiveness rating is a measure of investment attractiveness, ease of business and other indicators of a nation’s worthiness as an investment destination. 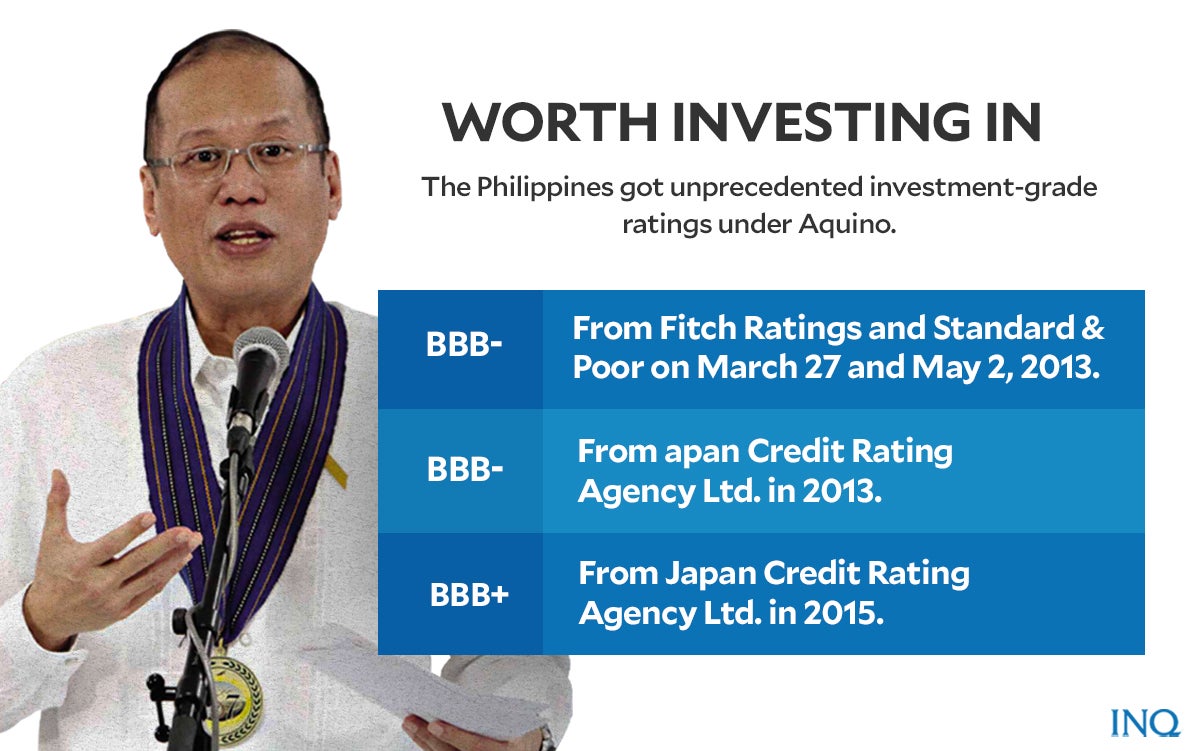 PH competitiveness ranking up by 10 notches

The Philippines moved further up on the list to 59th place in 2013 while in 2014, the Philippines climbed seven places to 52nd place.

In 2015, the Philippines ranked 47th, which was the fifth highest-ranking among Asean countries.

PH up 5 notches in competitiveness ranking

Contrary to claims by critics of Aquino, under his administration, the government was able to approve and complete key private partnership projects before his term ended in 2016.

According to a report by the Public-Private Partnership Center (PPC), three infrastructure projects have completed construction in 2015.

A separate list in the Official Gazette showed projects that had been approved during Aquino’s term that were completed by his successor, President Rodrigo Duterte.

Among these were the second phase of Naia Expressway, which started in 2012 and was completed a few months before Aquino stepped down.

Several projects in the National Capital Region (NCR) approved under Aquino and were partly finished and became operational after his term were:

Some of the projects approved by Aquino are now on the list of projects under Duterte’s infrastructure centerpiece, “Build, Build, Build.”

Among the landmark laws signed during the Aquino administration were:

Programs focused on the environment and climate change,  like Project NOAH and the National Green Program, were also introduced during the late president’s term.

When the Duterte administration took over in 2016, it was left with a P1 trillion budget after the Aquino administration failed to spend it on appropriated items.

According to data from then Budget Secretary Benjamin Diokno, P1.02 trillion worth of notices of cash allocation (NCA) was left untouched.

According to a report by the Department of Budget and Management (DBM) the underspending—on infrastructure and other capital outlays—was largely due to the ban on projects immediately preceding an election.

The anti-corruption campaign was a central part of the late president’s platform of government. During Aquino’s term, several top officials, including three senators, a former national police chief and his predecessor, Gloria Macapagal Arroyo, were arrested for graft-related cases.

Aquino’s promise to stop corruption, however, was smeared by the now infamous pork barrel scam, which his critics said involved many Aquino allies that have been spared from prosecution. The scam’s mastermind, Janet Lim Napoles, is now in jail, though. 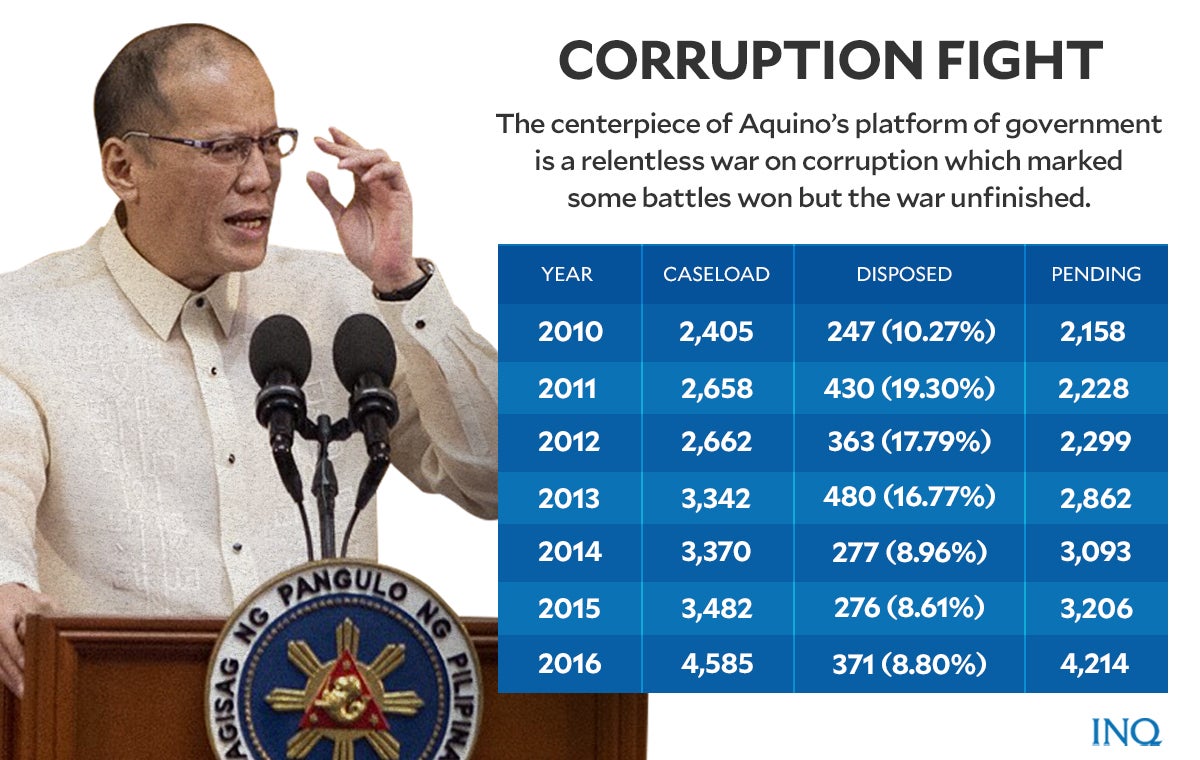 The numbers would also show an anti-corruption policy that appeared to be faltering in implementation.

The slow pace in the disposition of cases has led to the signing by Aquino of Republic Act No, 10660 in April 2015, which aimed to strengthen the capacity of the Sandiganbayan to resolve corruption cases.

The law increased the number of divisions in the anti-graft court from five to seven in a bid to ease the court’s backlog.

The new law also made it easier for the Sandiganbayan to constitute a quorum of justices. It allowed a quorum of just three justices in a division instead of five, making it quicker for cases to move forward and eliminate the excuse of lack of quorum in delay of cases.

It also sought to reduce the backlog of cases in the anti-graft court by giving jurisdiction to the regional trial courts over cases that do not involve more than P1 million in damage to the government.

Despite the passage of the law, toward the end of the Aquino administration, there were still at least 4,214 pending cases at the Sandiganbayan—double the amount of pending cases in 2010.

While data from the Sandiganbayan showed unimpressive numbers, international investors found improvements in the government’s efforts to tackle and address corruption.

The Philippines’ ranking in the Worldwide Governance Indicators (WGI) under the Control of Corruption category has been consistently in the top 50 out of 213 countries worldwide.

WGI, a project of the World Bank and the Brookings Institution, assesses countries’ quality of governance based on six different categories.

The Control of Corruption category measures the “perceptions of the extent to which public power is exercised for private gain, including both petty and grand forms of corruption, as well as ‘capture’ of the state by elites and private interests.”

READ: Aquino: Curse me, criticize me but I must do right thing

When Aquino retired from the presidency, he kept a low profile as a private citizen.

Instances when he was seen in public were few. These included his presence in February 2017 at the commemoration of the 31st anniversary of the Edsa People Power Revolt that toppled the Marcos dictatorship.

In July 2020, the Office of the Ombudsman indicted Aquino for usurpation of authority and graft for his alleged role in the operation to get Marwan that killed 44 SAF members.

In 2021, Aquino was charged with usurpation of legislative powers over the controversial Disbursement Acceleration Program (DAP), which converted government savings into disbursable funds for projects other than those for which these had been allotted.

In 2019, however, he made several public appearances starting in March when he campaigned for the opposition Senate ticket Otso Diretso during the May elections that year.

In November 2019, he also attended Mass for the 1,000th day of Leila de Lima’s continued detention.

Last December, the former president was hospitalized and admitted to ICU but was released after a few weeks.

READ: Life after the presidency of Duterte predecessors: VP run not included

Aquino has drawn a mix of irritation, fascination, admiration and scorn with his public statements.

Among those are these memorable lines: