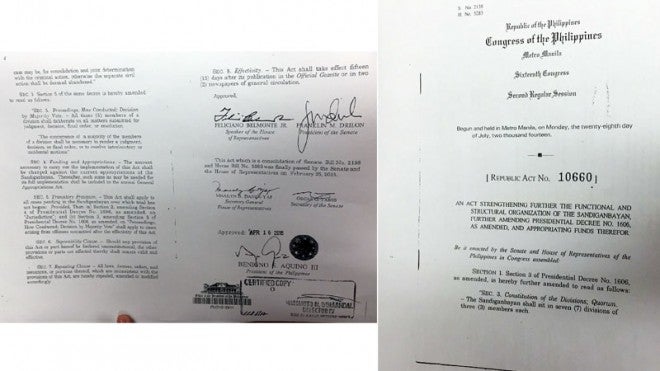 President Benigno Aquino III on Tuesday signed a law strengthening the capacity of the Sandiganbayan to resolve corruption cases.

Deputy presidential spokesperson Abigail Valte said in a press briefing that Aquino signed Republic Act No. 10660, which adds the number of Sandiganbayan divisions from the current three to seven.

Valte said the law would “result in the faster disposition of cases that are pending before the Sandiganbayan.”

The Palace official said that the newly signed law also changes the number of justices needed to have a quorum.

“This new amendment will allow two sitting justices to still conduct the court’s business in the absence of the third member. That will make things faster as well,’ she said.

She said that in the old law, each division, which had three members, could not hear the cases pending before them if one was absent. RC