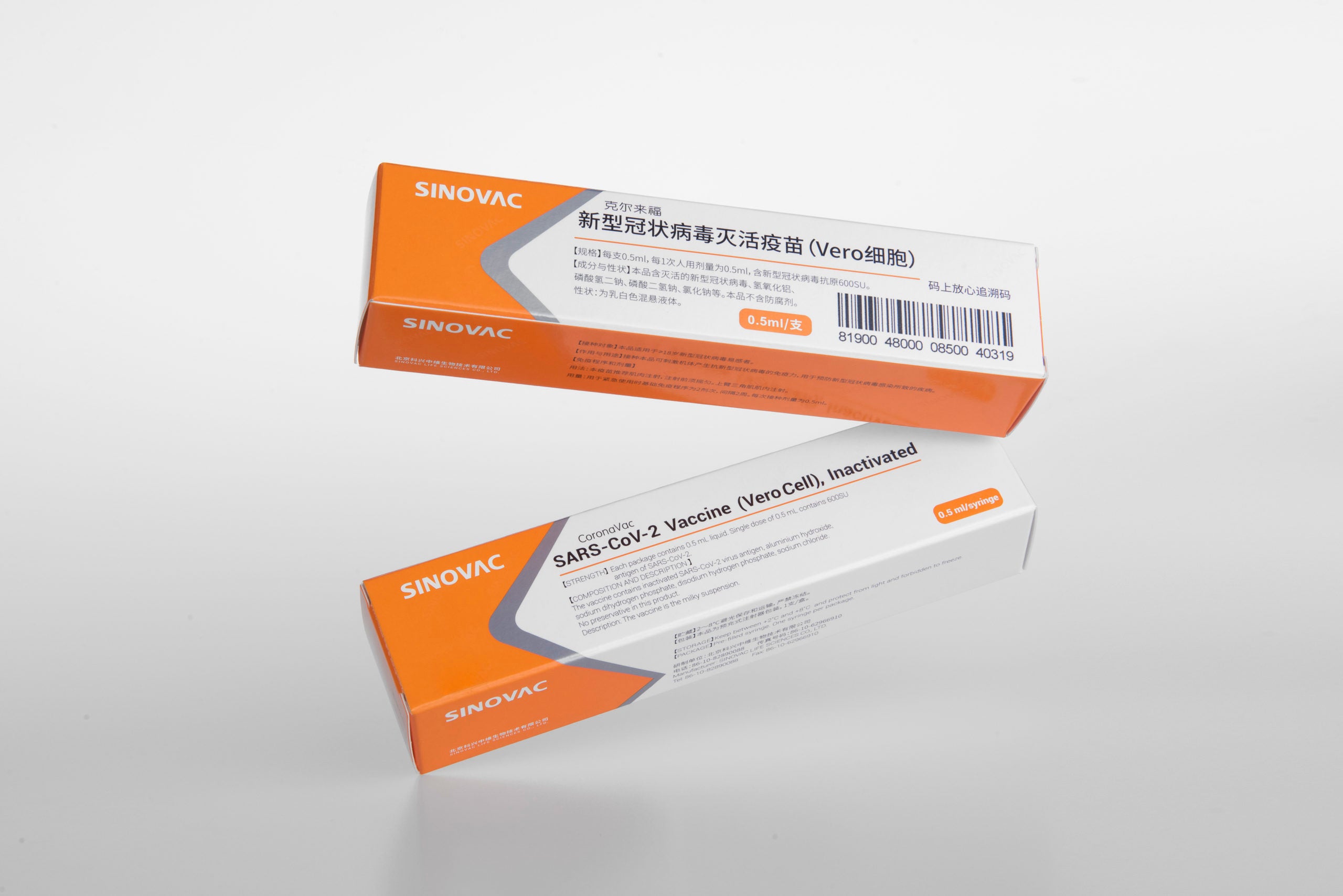 A report about scores of Indonesian health workers getting infected despite having received Coronavac injections had drawn concern among countries relying on the Chinese vaccine.

Last week, Indonesia’s health officials revealed that over 350 doctors and medical workers contracted SARS Cov2, the virus that causes COVID-19, despite getting injected with Coronavac.

Scores of health care workers in Indonesia were hospitalized with high fever and low oxygen saturation levels. Most had no symptoms and were on self-quarantine at home.

The report raised concern because it came as the district of Kudus in Central Java reported an outbreak of SARS Cov2 infections believed to be caused by the more transmissible delta variant.

While public health experts in Indonesia acknowledged Coronavac’s impact on reducing COVID deaths among health care workers, recent hospitalizations following inoculation remained a cause for concern, especially on whether the Sinovac product was really effective.

How effective is Coronavac against COVID-19?

Clinical trials have been conducted in several countries to measure the efficacy of Sinovac’s coronavirus vaccines. 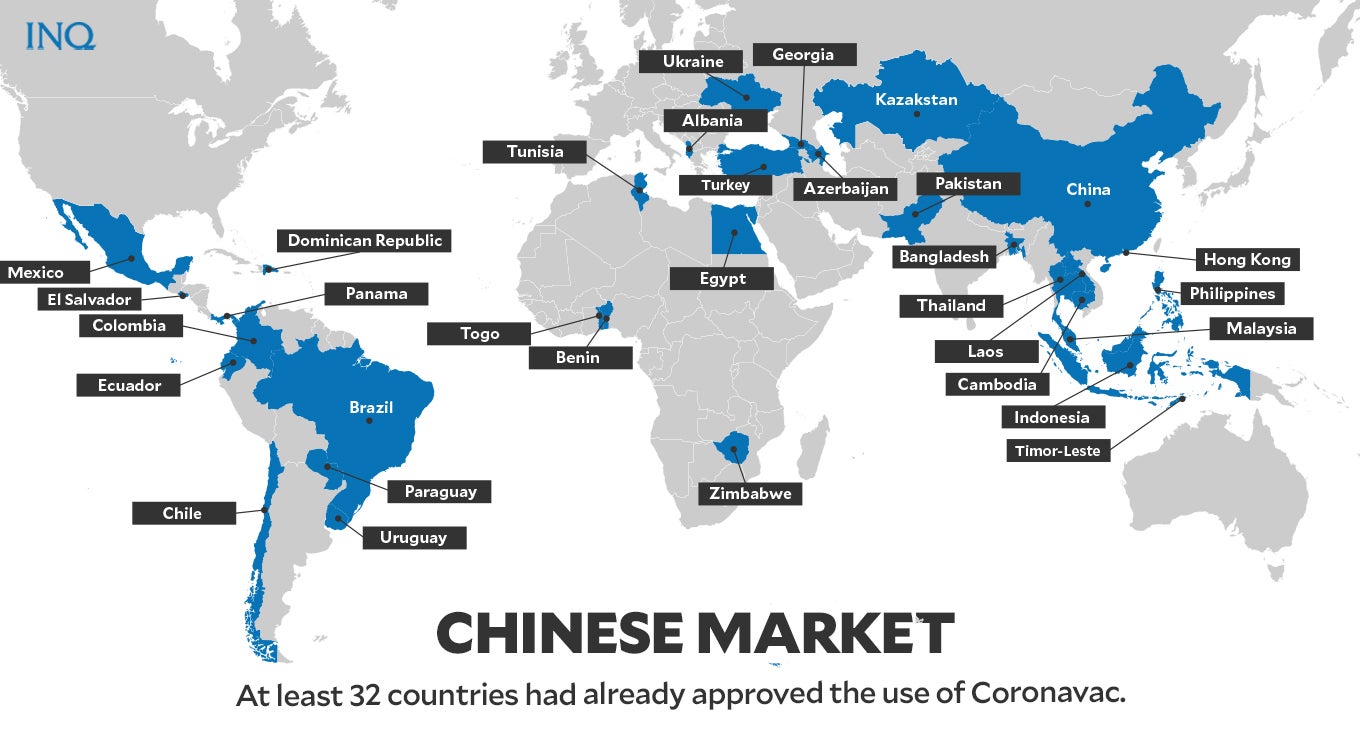 According to COVID-19 Vaccine Tracker, at least 32 countries had already approved Coronavac for emergency use:

The different trials, however, have produced varying efficacy data in past months. 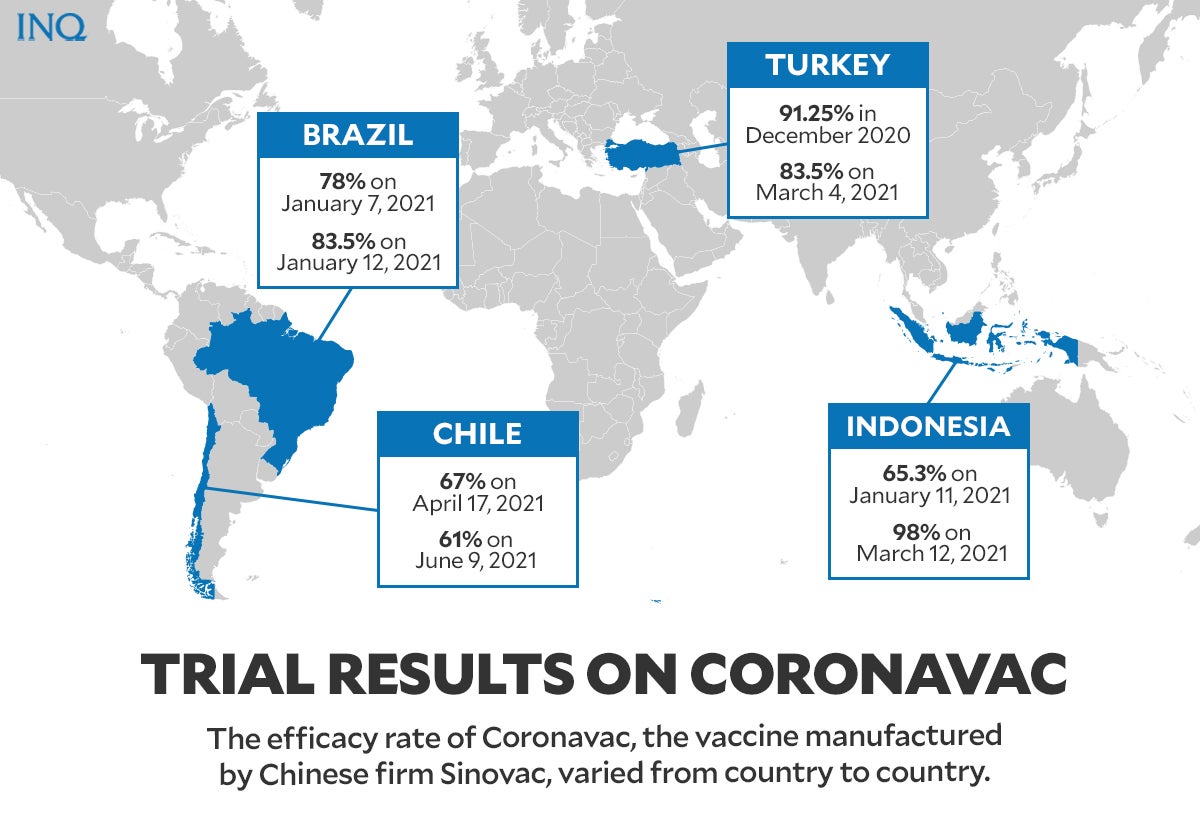 Indonesia, the first country to give Coronavac an emergency use approval outside China, reported last January that the vaccine was 65 percent effective after phase 3 clinical trials.

The results were based on data from 128,920 health care workers in Jakarta who were inoculated between January 13 to March 18.

The late-stage trial also showed that the vaccine prevented symptomatic COVID-19 in 94 percent of the group.

Turkey, which was among the first to release data on Coronavac’s efficacy, said last March that the vaccine was 83.5 percent effective against coronavirus.

This was lower compared to its initial findings which suggested an efficacy rate of 91.25 last December. However, researchers maintained that the vaccine was still 100 percent effective at preventing severe cases of COVID-19 and hospitalization.

The most recent data were based on late-stage trials among 10,216 participants—6,648 of whom received jabs as part of the study which began late September.

Brazil’s clinical trials, on the other hand, resulted in an efficacy rate of 50.4 percent against symptomatic infections—lower than the regulatory approval and below the initially announced rate of 78 percent.

Sinovac’s vaccine was found to be 67 percent effective in preventing symptomatic infection, according to a huge real-world study in Chile.

The study examined over 10 million people in Chile’s public health system between February and April. A comparison was made between people who have not yet received vaccine doses, individuals 14 days or more after receiving one dose, and more than 14 days after receiving a second dose.

Most recently, Uruguay found that the vaccine was 61 percent effective at preventing infections.

It was also 92 percent effective in preventing intensive care admissions and has reduced deaths by 95 percent.

The study was conducted among 795,684 health workers and the general population between 18-69 years old.

The results were based on the participants’ condition at least 14 days after their second dose.

According to experts, the different efficacy rates can be attributed to many factors including:

But Sinovac itself has yet to release its data on the effectiveness of the Coronavac against new SARS Cov2 variants.

However, despite the seemingly strong demand for Coronavac doses, the government still cast doubts over the vaccine’s efficacy.

“It does give the impression that the efficacy of different vaccines will vary quite significantly,” Singapore’s director of medical services Kenneth Mark told the New York Times last Friday (June 18), citing the incident in Indonesia.

Mark said he was worried over reported cases where individuals still became sick even after receiving jabs of Sinovac’s vaccine.

“Real-world studies showed that all vaccines, including those being used in the country, are all effective. It means it can prevent severe infections and hospitalization,” said Health Undersecretary Maria Rosario Vergeire in Filipino.

Vergeire added that more information is still needed about what happened to Indonesia’s health workers who received Coronavac shots.

She also advised the public to be cautious in interpreting similar information and reports.

“Looking at that article, we need to be very cautious because the people might get scared,” Vergeire said. “That article did not detail whether the affected health care workers were fully vaccinated or they just received one dose,” she said.

“Even our experts have reviewed this and we are still looking for other data to complete our analysis based on their report,” she continued.

The DOH urged the public to get vaccinated and not be doubtful of vaccines approved by the government.

The Philippines has so far received a total of 9 million COVID-19 vaccine doses by Sinovac—a million of which were donated by China.

Data on clinical studies of Coronavac showed these results per country: