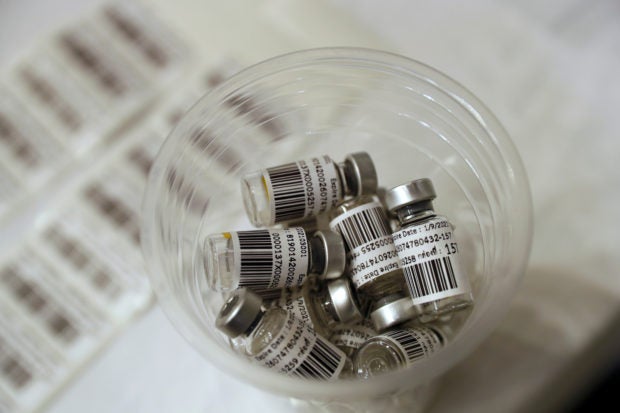 FILE PHOTO: Dispensed vials of the Sinovac COVID-19 vaccine are seen as the Thai resort island of Phuket rushes to vaccinate its population amid the coronavirus disease (COVID-19) outbreak, and ahead of a July 1 ending of strict quarantine for overseas visitors, to bring back tourism revenue in Phuket, Thailand, April 1, 2021. REUTERS/Jorge Silva

SANTIAGO — China’s Sinovac COVID-19 vaccine was 67% effective in preventing symptomatic infection, data from a huge real-world study in Chile has shown, a potential boost for the jab which has come under scrutiny over its level of protection against the virus.

Rodrigo Yanez, Chile’s vice trade minister who forged a deal with Sinovac to host the drug’s clinical trial and buy 60 million doses of the drug over three years, said the results showed Chile had made “the right bet”.

“It’s a game changer for that vaccine and I think it ratifies quite graphically the discussion over its efficacy,” he told Reuters, adding it should help it with approvals with the World Health Organization as the first real-world study.

Chile’s stock of CoronaVac is running low, with the supply of an agreed total of 14.2 million to be fully delivered by late May. Yanez said he was negotiating an additional 4 million doses of the vaccine and for now, the country will switch to using more of the Pfizer-BioNTech doses it is due.

The release of the CoronaVac data makes Chile one of a handful of countries, including Britain and Israel, that have used their rapid inoculation campaigns to gather insights into how effective vaccines are outside controlled clinical trials and when faced with unpredictable variables in societies.

Israel’s real-world study of the effectiveness of Pfizer’s vaccine looked at the results among 1.2 million people, a mix of those who received the shot and those who did not.

Chile’s study examined CoronaVac’s effectiveness among 10.5 million people, again looking both at people who had been vaccinated and those who had not. Vaccines were administered approximately 28 days apart.

The CoronaVac data published by Chile compares favorably with previous data released on its efficacy in clinical trials.

Brazilian trials have indicated general efficacy of the drug at preventing symptomatic infection at just above 50%, though shower far higher efficacy at preventing hospitalization and against moderate and severe cases.

Indonesia gave the vaccine emergency-use approval based on interim data showing it was 65% effective, while in a Turkish trial it had an efficacy in preventing symptomatic infection of 83.5% and 100% in preventing severe illness and hospitalization.

The Chilean study looked at the impact of the vaccine among people in the public health system between Feb. 2-April 1, adjusting for age, sex, comorbidities, income and nationality.

Its authors stressed that its results, for example a lower protection against death than in clinical trials, should be considered against the backdrop of a fierce second wave of the pandemic.

It compared people who were not inoculated, individuals 14 days or more after receiving one dose and more than 14 days after receiving a second dose. Protection against the virus was far higher after the second shot.

Rafael Araos, the Chilean public health official who presented the study, said the report did not specifically look at how the vaccine stood up to coronavirus variants, including the P1 mutant first identified in Brazil.

“The study was done during a period of high circulation of the virus, including of the variants – so these results are positive if we don’t have variants and also if we do,” he said.