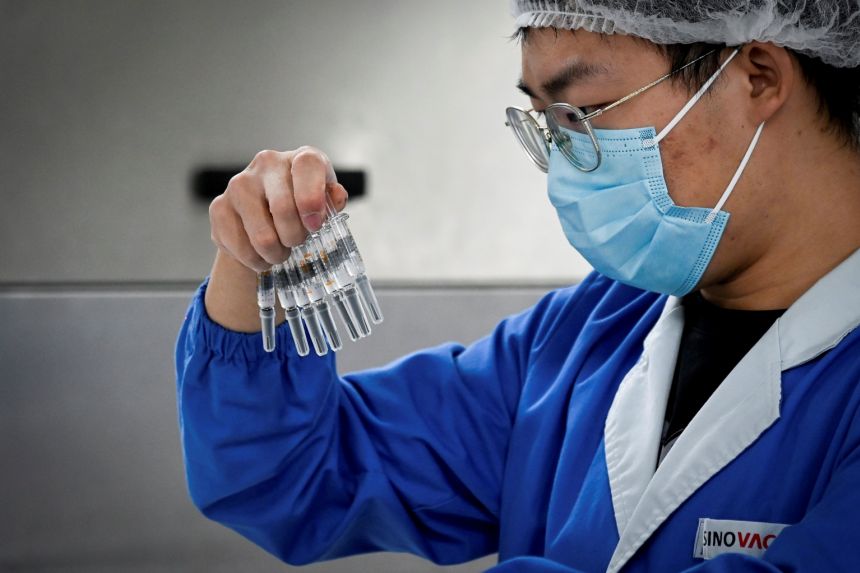 Indonesia’s Ministry of Health will carry out the distribution in parallel with testing the vaccines made by China’s Sinovac. PHOTO: AFP

JAKARTA — Nationwide distribution of the Covid-19 vaccine that was developed by Chinese firm Sinovac Biotech started on Sunday (Jan 3).

Mass inoculations are scheduled to begin later this month.

He added that the storage facilities necessary for keeping the vaccine doses had been prepared.

“All (vaccine) cold chain facilities at between 2 deg C and 8 deg C are ready. Hopefully that will help ensure the quality of the vaccines that will be used for the people,” he told a press briefing.

Mr Bambang said that Indonesia has carried out a number of national vaccination programmes in the past so infrastructure would not be an issue.

Indonesia, currently struggling to control South-east Asia’s worst coronavirus outbreak, plans to inoculate 181.5 million people aged 18 and above, or around 67 per cent of its nearly 270 million people, within 15 months.

The shots will first be given to its 1.3 million health workers. Another 17.4 million front-line workers will get vaccinated after and then 21.5 million people aged 60 and older will get the jab between January and April.

In the second phase, scheduled to run from April this year to March 2022, 63.9 million people in high-risk areas will get vaccinated, followed by the remaining 77.4 million of the targeted population.

Speaking during the same press briefing, the Health Ministry’s Covid-19 vaccination spokesman, Dr Siti Nadia Tarmizi, said that clinical trials of the Sinovac vaccine in Turkey and Brazil delivered what she described as “quite good” results, same as the ongoing third phase of the clinical trial in Indonesia.

The latter paved the way for the national vaccination program to run as scheduled.

“We are quite optimistic that (the program) will go in line with our schedule and we can begin vaccinations in the second or third week of January 2021,” Dr Nadia said.

Interim data from a late-stage trial in Turkey showed that the Covid-19 vaccine developed by Sinovac is 91.2 percent effective, while a similar trial in Brazil revealed the shot was more than 50 per cent effective.

Indonesia’s vaccination program is subject to approval from drug monitoring agency BPOM, which is set to grant emergency use authorization for the Sinovac vaccine to be used.

Dr Nadia said that the program will be carried out by around 2,500 hospitals, 13,000 health community centers, and 49 port health authorities across the country. It will be supported by about 30,000 vaccinators.

Indonesia has so far secured nearly 330 million doses from five different suppliers, including Sinovac, AstraZeneca and Novavax, with the possibility of procuring millions more from them if needed.

The world’s fourth most populous nation has reported 765,350 Covid-19 infections and 22,734 deaths as at Sunday. Its positivity rate stands at around 30 per cent, much higher that the World Health Organization’s recommended positive rate of 5 per cent or lower – a general benchmark for adequate testing.