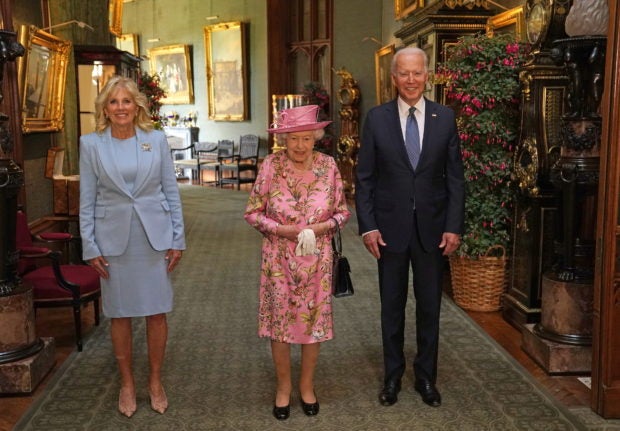 WINDSOR, England — U.S. President Joe Biden said Britain’s Queen Elizabeth reminded him of his mother and that she had asked about China’s Xi Jinping and Russia’s Vladimir Putin as they had tea at Windsor Castle on Sunday.

Biden lavished praise on the 95-year-old British monarch after their private meeting which came at the conclusion of the Group of Seven leaders’ summit at which he called for concerted action on China and ahead of a meeting with Putin on Wednesday.

“I don’t think she’d be insulted but she reminded me of my mother, the look of her and just the generosity,” Biden, 78, told reporters shortly before departing London.

“She’s extremely gracious, that’s not surprising, but we had a great talk. She wanted to know what the two leaders that I — the one I’m about to meet with, Mr Putin, and she wanted to know about Xi Jinping, and we had a long talk.”

The monarch, attired in a bright pink floral outfit, had warmly greeted Biden and his wife Jill in the Quadrangle of the castle, home to the royal family for nearly 1,000 years, where they were treated to a taste of British pomp.

The president inspected a Guard of Honor formed of The Queen’s Company First Battalion Grenadier Guards, which gave a Royal Salute, and the U.S. National Anthem was played before they entered the castle for tea.

“I said I wish we could stay longer, maybe we could hold the cars up a minute, and stuff. Anyway, she was very gracious,” said the president who confirmed he had invited the monarch to the White House.

The queen had already met the Bidens on their visit to Britain. She hosted a reception for leaders of the Group of Seven rich nations and their spouses on Friday night in the southwestern English county of Cornwall where the three-day summit was held.

Ahead of that, Jill Biden said they had been looking forward to meeting the queen and that it was an exciting part of the visit for them.

The Bidens became the fourth president and first lady the queen has received at Windsor, following the Trumps in 2018, the Obamas in 2016, President George W. Bush and his wife in 2008 and the Reagans in 1982.

Despite the loss in April of Prince Philip, her 99-year-old husband of more than 70 years, and her age, the queen has shown her determination to carry on with her official duties as head of state during the high-profile G7 gathering.