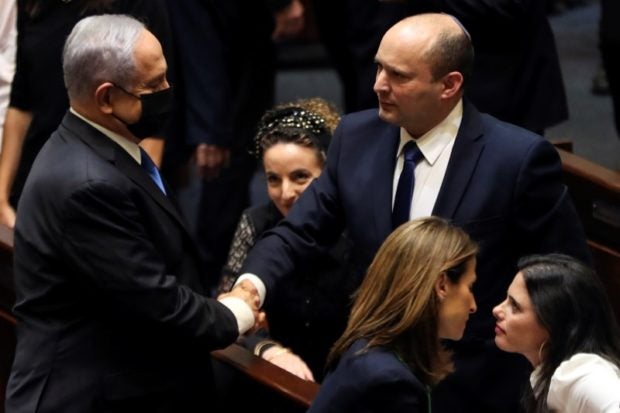 JERUSALEM — Following are reactions to the new government in Israel, led by Prime Minister Naftali Bennett.

“On behalf of the American people, I congratulate Prime Minister Naftali Bennett, Alternate Prime Minister and Foreign Minister Yair Lapid, and all the members of the new Israeli cabinet. I look forward to working with Prime Minister Bennett to strengthen all aspects of the close and enduring relationship between our two nations.”

“This is an internal Israeli affair. Our position has always been clear, what we want is a Palestinian state on the 1967 borders with Jerusalem as its capital.”

“On behalf of the UK, I offer my congratulations to

@naftalibennett and @yairlapid on forming a new government in Israel. As we emerge from COVID-19, this is an exciting time for the UK and Israel to continue working together to advance peace and prosperity for all.”

“I look forward to working with the Government to advance the ultimate goal of a lasting peace between Israelis and Palestinians.”

“Congratulations to Prime Minister @naftalibennett and to Alternate PM & MFA @yairlapid for the swearing in of the new Israeli government. Looking forward to strengthen the partnership for common prosperity and towards lasting regional peace & stability.”

“Regardless of the shape of the government in Israel, it will not alter the way we look at the Zionist entity. It is an occupation and a colonial entity, which we should resist by force to get our rights back.”

“Congratulations on the formation of a new Israeli government, Prime Minister @NaftaliBennett and Alternate Prime Minister @YairLapid. Together, let’s explore ways to further strengthen the relationship between Canada and Israel.”

“We are aware that this step has a lot of risks and hardships that we cannot deny, but the opportunity for us is also big: to change the equation and the balance of power in the Knesset and in the upcoming government.”

“I think it’s very exciting for Israel to have a new beginning and I’m hopeful that the new government will take them in the right direction.”

“It’s a sad day today, it’s not a legitimate government. It’s pretty sad that almost 86 (out of 120 seats) in the parliament, the Knesset, belong to the right-wing and they sold their soul and ideology and their beliefs to the extreme left-wing just for one purpose – hatred of Netanyahu and to become a prime minister.”

“Congratulations to PM @naftalibennett and alternate PM @yairlapid for forming a government. I look forward to working with you. Austria is committed to Israel as a Jewish and democratic state and will continue to stand by Israel’s side.”

Read Next
DOH: 40% of newly delivered Pfizer vaccines to go to NCR Plus 8
EDITORS' PICK
What to watch out for when selecting a video surveillance solution
DOH says COVID-19 cases plateauing, but public shouldn’t be ‘complacent’
House energy committee chair Arroyo bats for cheap electricity
Unleash the photographer in you this World Photography Day with vivo smartphones
23,000 cops to be deployed nationwide for school reopening
Look Through: The fate of impounded stray dogs
MOST READ
Sharon Cuneta asks for prayers for friend in ICU who suffered silent stroke
Light therapy could be the answer to your sleep problems
Korina Sanchez reunites with former ABS-CBN co-anchors Julius Babao, Cheryl Cosim
Solons file resolutions seeking probe on ABS-CBN, TV5 merger
Don't miss out on the latest news and information.