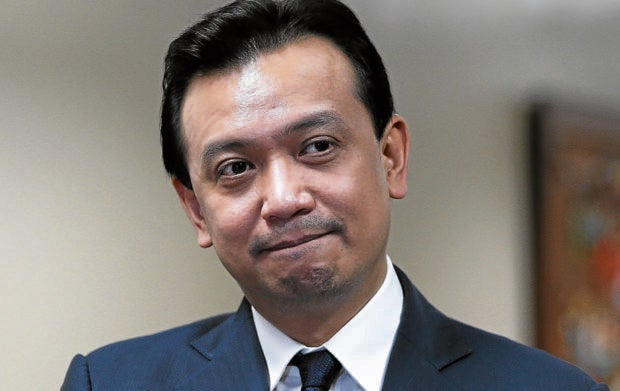 MANILA, Philippines — The Court of Appeals has upheld the ruling of the Makati Regional Trial Court that dismissed the coup d’etat case against former Sen. Antonio Trillanes IV.

In a 67-page decision dated May 31, the Special 11th Division of the court said the petition filed by the government through the Office of the Solicitor-General (OSG) was “patently unmeritorious.”

The appeals court scored on the inconsistency on the part of the OSG for arguing before the lower court that Trillanes failed to comply with the condition set under Proclamation No. 75 so that he could enjoy the benefit of a conditional amnesty.

However, upon appeal, the OSG said Proclamation No. 75 issued by then President Benigno Aquino III is unconstitutional.

“This Court cannot comprehend the mental calisthenics entailed by the Janus-faced position petitioner assumed in this case. Why would it invoke the provisions of a proclamation which it would later claim to be invalid due to being unconstitutional,” the court said.

It pointed out that the question of the constitutionality of the proclamation should have been raised before the Regional Trial Court.

The appeals court said what was delegated to the military and the Department of National Defense (DND) was the implementation of amnesty, not the granting of amnesty itself.

The appeals court also noted that Congress had concurred with Proclamation No. 75. Trillanes’ compliance with the requirements set under the Proclamation did not need congressional concurrence.

Proclamation No. 572 specifically revoked the DND Ad Hoc Committee Resolution No. 2 issued on Jan. 31, 2011, insofar as it granted amnesty to Trillanes in line with Aquino’s Proclamation No. 75.

Duterte declared “void ab initio” the grant of amnesty to Trillanes under Proclamation No. 75  for his supposed failure to file the official amnesty application form and expressly admit his guilt for the crimes he had committed.

The appeals court agreed with the ruling of Makati RTC Judge Andres Soriano that affirmed the validity of Proclamation No. 572, saying: “There is nothing in the 1987 Constitution which prohibits the President to revoke the grant of a conditional amnesty if he finds that the grantee failed to comply with the conditions thereof.”

“Proclamation No. 572 is a valid exercise by the President of his Constitutional power of control over all executive departments, bureaus, and offices. This has been succinctly defined by the Supreme Court as essentially the power to alter or modify or nullify or set aside what a subordinate officer had done in the performance of his duties and to substitute the judgment of the former with that of the latter,” the appeals court added.

It added that Proclamation No. 572 did not violate Trillanes’ right to due process and equal protection of the law as the said proclamation directed the Armed Forces of the Philippines and the Philippine National Police to “employ all lawful means” to apprehend the former senator.

The appeals court gave weight to the findings of the trial court that Trillanes had complied with all the conditions of  Proclamation No. 75, particularly the filing of an official amnesty application form and expressly admitting his guilt for the crimes he had committed.

“Taking into consideration all of the evidence presented, the Court holds that the fact of private respondent’s actual filing of his application for amnesty is duly established in this case per the judicious factual findings of the public respondent,” the appeals court noted.

It said bad faith could not be attributed to Trillanes for failure to present the original or at least a copy of his application for amnesty. The appeals court pointed out that, lamentable as it was that the document was lost, seven years had passed since the actual filing was made by Trillaes.

[I thank the Court of Appeals justices for making sure that justice is served amid the Duterte administration’s twisting of the law against the opposition.]

[Again, I thank Judge Andres Soriano for standing up for what is right despite the harassment done by the Duterte administration.]

Soriano was the same judge who recently found Trillanes guilty of libel for his statements that tagged former Makati Mayor Jejomar Erwin “Junjun” Binay Jr. on the bribery allegation against the Court of Appeals justices.