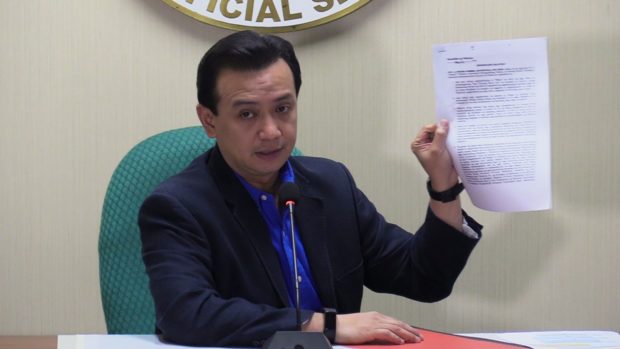 In a decision by Makati RTC Branch 148 Judge Andres Soriano, the prosecution was able to establish the elements of libel in Trillanes’ utterances to the media where he linked the younger Binay to alleged acts of bribery, graft, and corruption among others.

“The Court holds that the prosecution established all the elements of libel herein against the accused as defined under Article 353 in relation to Article 355 of the Revised Penal Code,” Soriano said.

Article 355 of the Revised Penal Code penalizes libel with prison correcional (two years, four months and one day) in its minimum and medium periods or a fine ranging from P40, 000 to P1.2 million, or both, in addition to the civil action which may be brought by the offended party.

In this case, the Makati RTC ordered Trillanes to pay Binay P500,000 in moral damages as well as the costs of law suit and a fine of P100,000 adhering to a Supreme Court circular preferring the imposition of fines rather than imprisonment in libel cases.

The RTC, in finding Trillanes guilty said: “Making and releasing the subject statements absent a serious verification and investigation is recklessness bordering on a disregard of what is true or false.”

Trillanes’ April 2015 interview over several radio and television programs, and in an article, publicly claimed that members of the 6th Division of the Court of Appeals were given bribes in millions of pesos in exchange for the favorable action related to the younger Binay’s case.

The former senator also filed a resolution calling for a Senate investigation into the alleged “justice for sale” issue.

But the court said the resolution was filed several days after he made the assailed statements to the media.

The court added that Trillanes cannot use the resolution of the Senate Blue Ribbon Committee recommending the filing of corruption charges against the Binays for their alleged involvement in anomalous contracts in the city as his vindication in the libel case because it is different and distinct from his allegation involving Court of Appeals Justices.

The court added that Trillanes cannot also use as a cloak the right to freedom of expression or speech.

“Accused right to freedom of expression must be exercised responsibly. The exercise of any right enshrined in the Bill of Rights comes with an equal burden of the responsible exercise of that right,” the court said.

“The recognition of a right is not a free license for the one claiming it to run roughshod over the rights of others,” it added.

The issue stems from Trillanes’ accusation that then Court of Appeals Justices Jose Reyes Jr. (now a retired Supreme Court Associate Justice) and Francisco Acosta received P25 million to stop the suspension of the younger Binay as mayor of Makati.

The suspension of Binay then was in connection with the allegedly anomalous construction of the Makati City Hall Parking Building 2.

In 2016, Trillanes was found guilty of indirect contempt by the Court of Appeals saying the allegation is “malicious and baseless.”

Meanwhile, Trillanes, in a statement said: “That is the price to pay for standing up against very powerful people.”

“We intend to exhaust all legal remedies to overturn this ruling. Regardless, we will not let this legal setback discourage us in pursuing our advocacy to purge our government of corrupt and abusive public officials,” he said.

Soriano was the same judge who junked the Duterte administration’s efforts to revive the coup d’ etat case against Trillanes for his participation in the 2003 Oakwood mutiny when he was still a junior Navy officer.