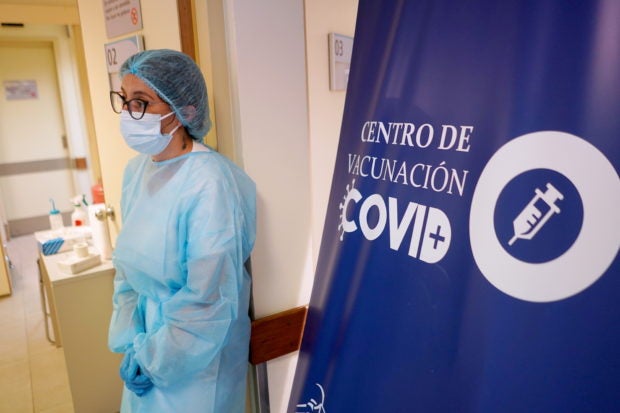 ASUNCION — Uruguay on Tuesday released real-world data on the impact of Sinovac Biotech’s COVID-19 vaccine among its population that showed it was over 90% effective in preventing intensive care admissions and deaths.

The shot reduced deaths by 95% and intensive care admissions by 92%, and also showed 61% efficacy in cutting coronavirus infections, the government said.

A total of 795,684 people – health workers and members of the general population between the ages of 18 and 69 – at least 14 days after receiving their second dose of Sinovac’s CoronaVac were compared to unvaccinated people to determine the real-world vaccine effectiveness, the government said in a report.

The government also studied the effectiveness of the Pfizer/BioNTech vaccine among 162,047 health workers and people over 80 years old. The shot was 94% effective at preventing intensive care unit admissions and deaths, and reduced infections by 78%, the report said.

Overall, intensive care hospitalizations and deaths from COVID-19 dropped by more than 90% among Uruguayans who were fully-inoculated, the data showed.

The tiny Latin nation with a population of 3.5 million managed to largely hold COVID-19 at bay with a strict lockdown last year. This year, it has seen a spike in cases that in recent weeks propelled it to the ranks of countries with the highest COVID-19 death rates per million, according to Our World in Data figures.

So far, it has vaccinated almost 52% of its population with at least one dose of COVID-19 vaccine from Sinovac, Pfizer/BioNTech or AstraZeneca, received through the COVAX vaccine alliance, while 29% had been fully vaccinated, between the end of February and June 1, according to Ministry of Health data.