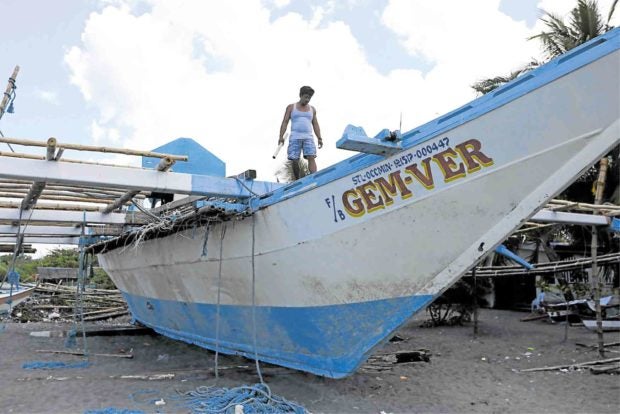 Junel Insigne, captain of the FB Gem-Ver, checks out the damage on his craft, which was rammed and sunk by a Chinese vessel in the West Philippine Sea in June. Abandoned in the icy waters, Insigne and his 21-man crew floated for three hours until a Vietnamese ship came to their rescue. —RICHARD A. REYES / INQUIRER FILE PHOTO

MANILA, Philippines — The Philippines and China have finally kick-started the formal negotiations to compensate 22 Filipino fishermen two years after they were left for dead by a Chinese trawler that rammed their small fishing boat in the West Philippine Sea.

Justice Undersecretary Adrian Sugay on Tuesday said Filipino and Chinese officials met online on Monday to discuss the financial reparations that the owner and crew members of FB Gem-Ver 1 had demanded from the operator of the vessel that almost killed them.

Justice Secretary Menardo Guevarra had previously said that Gem-Ver’s owner and crew members had asked for P12 million in civil damages from the owner of the Chinese vessel Yuemaobinyu 42212.

“The Philippine panel invited attention to the fact that the crew members of the Chinese fishing vessel, in violation of relevant international conventions and customary international maritime law, failed to extend assistance to persons who were clearly in distress at sea,” Sugay told reporters.

“The Philippine panel reiterated the claim of the owner and the crew members of FB Gem-Ver 1 for compensation for the damage sustained by the fishing vessel, for loss of income and for moral suffering and mental anguish,” he said.

Sugay said representatives of the Chinese trawler’s owners, who were joined by officials of China’s Bureau of Fisheries, had informed them that they would make a counteroffer.

He, however, could not provide the details of the counterproposal since the Chinese panel would have to formally present it first to the Filipino fishermen.

China’s Bureau of Fisheries, he added, would directly contact the DOJ in ensuring that the Filipino fishermen would be “fairly and satisfactorily compensated for all damages sustained as a result of the collision.”

The justice undersecretary said both sides would still have to negotiate if the indemnity was enough for Gem-Ver’s crew members and owner not to pursue any other case against the owner of the Chinese vessel.

The compensation will settle the civil liability, Sugay told the Inquirer. “This is the whole point of the negotiations,” he said.

Asked if both sides had agreed when to conclude the negotiations, he said: “What was agreed upon was a formal counterproposal from the Chinese side. Any further meetings will be dependent on the acceptability of the counterproposal.”

Gem-Ver 1, a 14-ton fishing boat from San Jose, Occidental Mindoro province, sank after it was rammed by the Chinese trawler while anchored at Recto (Reed) Bank shortly before midnight on June 9, 2019.

Recto Bank, about 275 kilometers west of El Nido, Palawan province, is within the Philippines’ exclusive economic zone (EEZ) in the West Philippine Sea.

Instead of helping them, the Chinese vessel abandoned the Filipino fishermen struggling to keep afloat in the high seas in the dark. They were eventually rescued by a Vietnamese fishing boat two hours after the collision.

Critics said the ramming, which President Duterte played down as a “little maritime accident,” highlighted the dangers of the unabated incursions of Chinese vessels into Philippine waters.

They also claimed that the President’s appeasement policy toward Beijing emboldened Chinese fishermen to steal marine resources within the country’s 370-km EEZ.