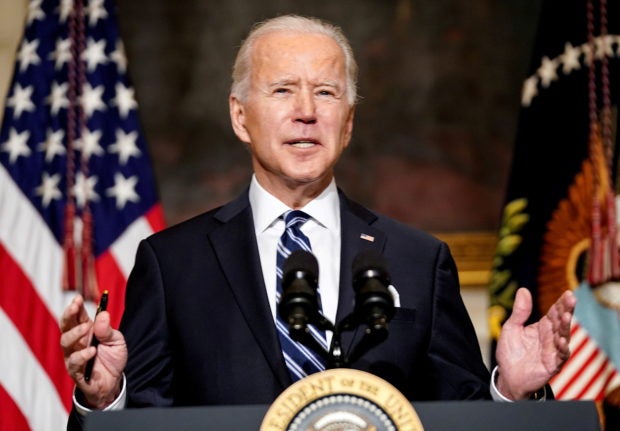 WASHINGTON  – The White House on Friday sent Congress a $6 trillion budget plan that would ramp up spending on infrastructure, education and combating climate change, arguing it makes good fiscal sense to invest now, when the cost of borrowing is cheap, and reduce deficits later.

The first comprehensive budget https://www.whitehouse.gov/omb/budget offered by Democratic President Joe Biden faces strong opposition from Republican lawmakers, who want to tamp down U.S. government spending and reject his plans to hike taxes on the rich and big corporations.

The blueprint builds on a partial “skinny budget” the White House released last month that mapped out $1.5 trillion in discretionary spending.

The plan drew praise from Democrats, including House Speaker Nancy Pelosi, and criticism from Republicans – who blasted the proposed higher debt levels – and some progressive groups, who said it should have scaled back military spending.

Senate Budget Committee Chairman Bernie Sanders called Biden’s budget “the most significant agenda for working families in the modern history of our country,” and said it would create millions of good-paying jobs, while reducing poverty.

Senate Majority Leader Mitch McConnell heaped scorn on the plan, and warned Democrats to “move beyond the socialist daydream and the go-it-alone partisanship.”

PAID FOR IN 15 YEARS

White House officials said Biden’s $4 trillion plans to address historic U.S. inequality, climate chance and provide four more years of free public education would be completely paid for in 15 years, with tax increases starting to chip away at deficits after 2030.

Cecilia Rouse, the chair of Biden’s Council of Economic Advisers, says Biden’s plan is front loaded and that the administration was willing to live with budget deficits amid low-interest rates to make significant investments in the nation’s economy. She projected a drop in deficits by over $2 trillion in the following years.

“That is a sharp departure from unpaid tax cuts under the prior administration that seriously worsened our long-term fiscal problem,” she said. “The most important test of our fiscal health is real interest payments on the debt. That’s what tells us whether debt is burdening our economy and crowding out other investments.”

While rates on U.S. Treasury securities have climbed off record lows seen at the height of the coronavirus crisis last year, the government’s borrowing costs are still the lowest they have been in years.

Rouse said the economy was seeing short-term inflation spikes, fueled by the sharp growth in the economy, but projected it settling down to an annual rate of around 2% over time.

Biden’s first full spending outline since taking office in January serves as the fiscal blueprint for his political priorities, and is likely to kick off months of difficult negotiations with Congress, which needs to approve most of the spending.

Republicans’ opposition is growing to much of Biden’s push to spend more to revamp the U.S. economy, as they argue it could fuel inflation and tamp down corporate competitiveness.

Biden has tussled with Republicans over the price of his initiatives, recovery from the pandemic and improvement of roads and bridges. No Republicans voted for his $1.9 trillion stimulus bill, but some touted its benefits later, drawing some chiding from the president.

U.S. Treasury Secretary Janet Yellen said on Thursday that the budget would push U.S. debt above the size of the U.S. economy but would not contribute to inflationary pressures.