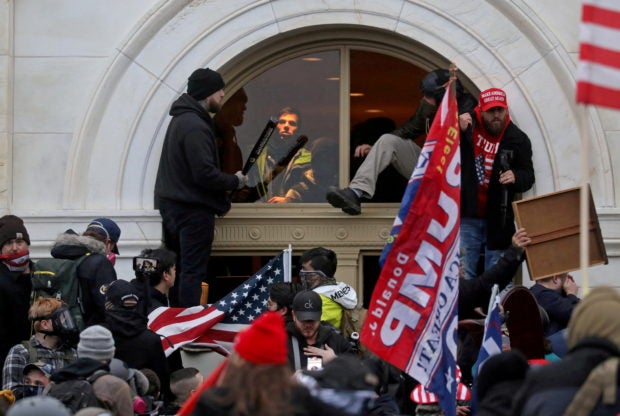 A mob of supporters of then-U.S. President Donald Trump climb through a window they broke as they storm the U.S. Capitol Building in Washington, U.S., January 6, 2021. (REUTERS)

WASHINGTON  – Republicans in the U.S. Senate on Friday derailed a bipartisan inquiry into the deadly assault on the Capitol by former President Donald Trump’s supporters, despite a torrent of criticism the lawmakers were playing down the violence.

Democrats and some moderate Republicans had called for a commission to probe the events up to and including Jan. 6, when hundreds of supporters of Trump, a Republican, stormed the Capitol, fighting with police, urging violence against lawmakers and delaying the formal certification of President Joe Biden’s election victory. The violence left five people dead including a Capitol Police officer.

The measure mustered a 54-35 vote which fell short of the 60 votes needed to advance the legislation in the 100-member Senate. The 35 no votes were all Republicans. Six Republicans voted in favor of the commission.

“We all know what’s going on here. Senate Republicans chose to defend the Big Lie because they feared that anything that might upset Donald Trump could hurt them politically,” Senate Democratic Leader Chuck Schumer said after the vote.

The proposed commission would have had the power to force witnesses, possibly including Trump, to testify under oath about what happened that day. Trump had urged Republican lawmakers to vote against it and warned of “consequences” for those who supported it.

It was the first time this year that Republicans used the 60-vote hurdle, known as a filibuster, to defeat legislation.

The vote underscores the steep challenges for Democrats in the evenly divided chamber, as they will have to win the support of at least one in five Republicans to pass policing reforms, voting-rights legislation and other priorities.

The White House said Biden remained committed to a full, independent investigation of the attack.

Senate Democrats have been under pressure from activists on the left to scrap the chamber’s longstanding supermajority rule, but have so far declined to do so. In a letter to Democrats after the vote, Schumer said Congress had “seen the limits of bipartisanship.”

Senate Republican Leader Mitch McConnell has argued that a commission would have duplicated work done by other congressional committees, as well as a sweeping federal criminal investigation that has so far resulted in the arrests of more than 440 people.

But Republicans are also concerned that a commission, modeled on one that probed the Sept. 11, 2001, attacks, would focus attention on the violence and on Trump’s persistent false claims about the 2020 election well into next year’s midterm congressional election campaigns.

Republicans did not defend these positions on the Senate floor before or after the vote.

The proposal previously passed the House of Representatives with the support of all Democrats and 1 in 6 Republicans after bipartisan negotiations.

“It is unfortunate that we fell a few votes short of what was needed to begin debate on this vital legislation,” said Senator Susan Collins, one of the Republicans who voted to create a commission.

Collins took the most active stance in her party in pushing against McConnell in support of the bill, securing Schumer’s support for an amendment requiring the commission staff be appointed by Democrats and Republicans.

She had a tense exchange with Schumer during Friday’s vote and Republican colleague Mitt Romney said she had been disappointed the Democratic leader hadn’t voiced support for her amendments during his floor speech. Schumer said he voiced support for many senators including at least one Republican, Rob Portman.

After the Senate vote, House of Representatives Speaker Nancy Pelosi said Democrats would “proceed to find the truth” about what happened on Jan. 6, but said nothing about whether she would set up a special committee to investigate, as some Democrats have suggested.