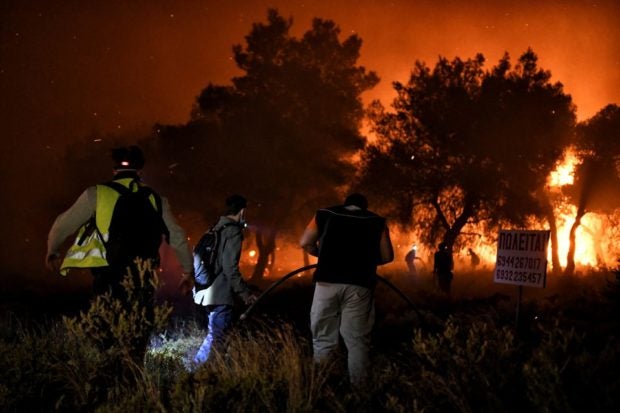 Firefighters and volunteers try to extinguish a wildfire burning in the village of Schinos, near Corinth, Greece, May 19, 2021. REUTERS/Vassilis Psomas

ATHENS — Scores of Greek villagers were evacuated early Thursday as a forest fire raged overnight around the protected wildlife habitat of Mount Geraneia, the fire department said, with no injuries immediately reported.

Six villages and two monasteries were evacuated after the fire broke out on Wednesday evening near the village of Skinos on the Gulf of Corinth, some 90 kilometers (56 miles) west of Athens, a spokesman told AFP.

Fire department chief Stefanos Kolokouris said reinforcements had been rushed in from around the country to contain the blaze.

“It’s a large fire in a pine forest (and the) terrain is difficult.”

Kolokouris said he believed the fire could be brought under control during the course of the day.

Billowing clouds of smoke were visible in the capital.

Many locals have summer homes in the area, but lives are not in immediate threat, fire officials said.

However, electricity has been knocked out in the area and could take 48 hours to restore service, according to state grid technicians on the scene.

“This is the first major fire of 2021… communities have been evacuated as a precaution,” fire department spokesman Vassilis Vathrakogiannis had earlier told Skai.

“We have no information (that people’s lives were threatened) and we have not had to rescue anyone,” he said.

Over 180 firemen with 62 fire engines have been deployed to the area, backed by 17 planes and three helicopters, the fire department tweeted.

Some homes have been damaged, fire officials said.

In 2018, 102 people died in the coastal resort of Mati, near Athens, in Greece’s worst fire disaster.