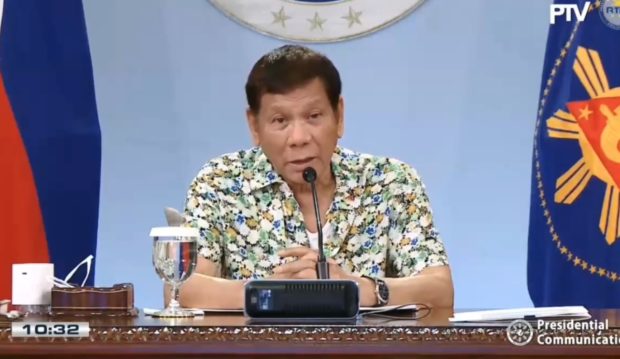 MANILA, Philippines — President Rodrigo Duterte has asked officials from the Bangsamoro Autonomous Region in Muslim Mindanao (BARMM) to help him solve the problem on peace and order in the region, advising them to talk while he is still in office.

Duterte said during his visit to Cotabato on Tuesday that officials should grab the opportunity to talk peace with the national government while he, who is ready to listen, is still in position.

The President hails from Davao City, the urban hub of Mindanao, and traces a part of his roots to several Muslim tribes in the county.

(Because I really want to end the evil people, since we are ready to listen.  We want to reconfigure Mindanao, we will do it (if) we just talk.  You can start now while I am still here to listen to you, you do not know how much I lobbied around just to convince them to give the BARMM here in Mindanao.)

While the town has been retaken by the Philippine Army after six hours, it bought flashbacks of what transpired in the Marawi siege, where another IS-linked organization in the form of the Maute Group took over the Lanao del Sur capital.

The ordeal left residents scrambling out of the town, while a lot of motorists were stranded.

Duterte said he hopes the current BARMM officials and other town executives can get members of the BIFF — a group that stemmed off from the Moro Islamic Liberation Front which the government talked to — to adhere with their yearnings for long and lasting peace in Mindanao.

“Tulungan lang ninyo ako, pati sa panahon ko, kung makausap, if there is still a chance for you to cross the line and talk to them, and sabihin lang ninyo, ‘wag na muna ngayon, you know, do not commit atrocities that could no longer be stomached by the government,’” the President noted.

(Just help me, and during my time, if there is still a chance for you to cross the line and talk to them, tell them to “stop doing those things for now, you know do not commit atrocities that could no longer be stomached by the government.”)

(Now, if you cannot convince the people, I know that some of them do not like you because maybe you are their enemies.  But you must do something because it will come to a fore when a lot of soldiers and police officers die, they would start asking me, “Sir, is this how things happen, we react to situations and we continue to die?”)

If it does not happen, Duterte said that law enforcement agencies may press for more decisive actions against separatist groups.

“So pagka gano’n, kung hindi ko mapigilan, and there will be an all out offensive, ‘yan na ang problema.  And if I give the order, I will no longer withdraw it, I will wait for the next president to do what he wants with Mindanao,” he stressed.

(So if that happens, and I can no longer contain it, and there will be an all-out offensive, that would be a big problem.  And if I give the order, I will no longer withdraw it, I will wait for the next president to do what he wants with Mindanao.)