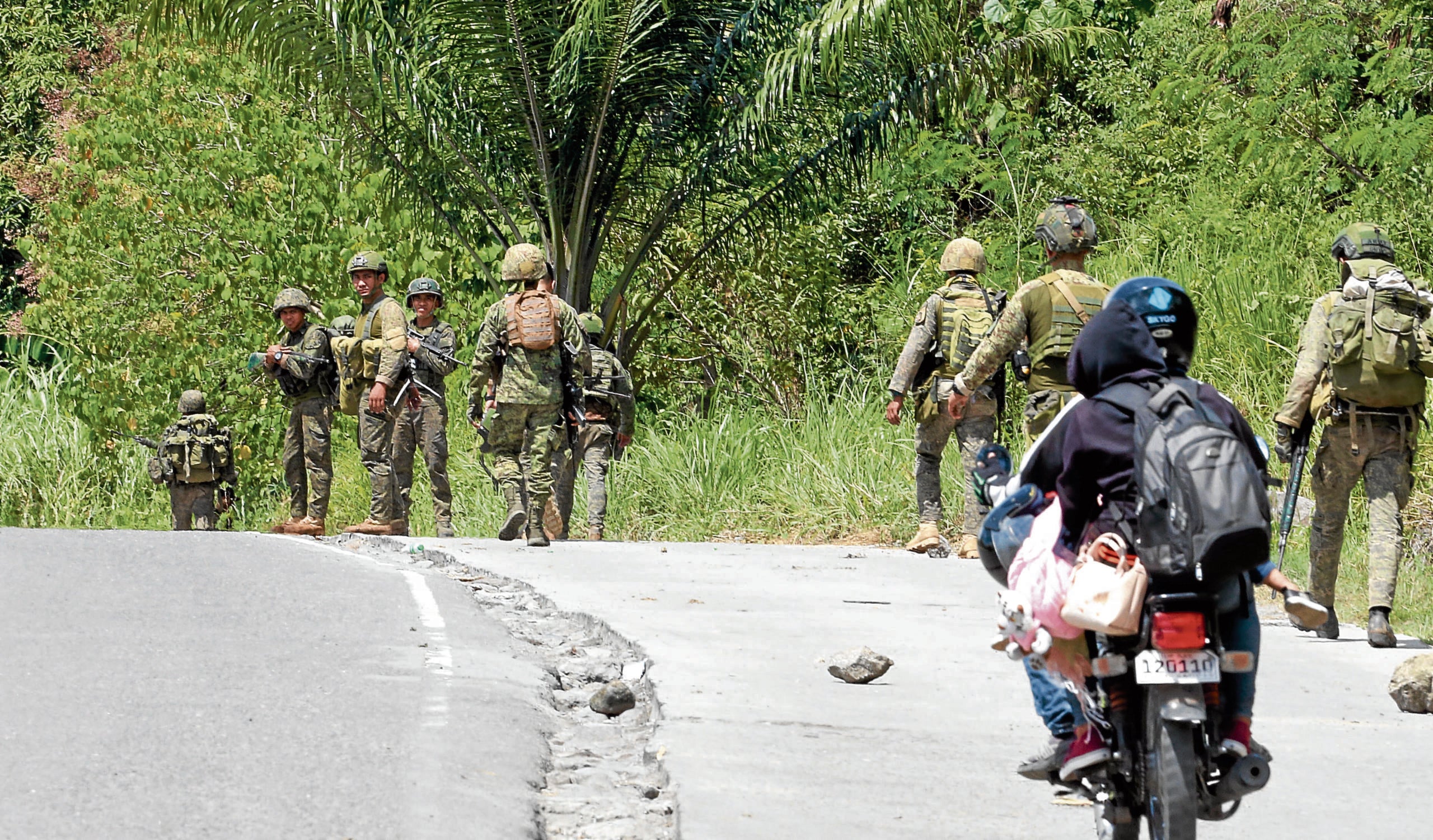 GUNMEN FLEE Soldiers who battled militants belonging to pro-Islamic State Bangsamoro Islamic Freedom Fighters who occupied a market in Datu Paglas, Maguindanao, are seen on a highway after sending the gunmen fleeing the firefight on Saturday. —JEOFFREY MAITEM

COTABATO CITY—More than 100 gunmen belonging to the Islamic State (IS)-linked Bangsamoro Islamic Freedom Fighters (BIFF) occupied the center of the banana farming town of Datu Paglas in Maguindanao for about six hours before fleeing a military assault on Saturday.

No casualties were reported from the ensuing gunbattle.

Saturday’s attack is the boldest of five major BIFF offensives in Maguindanao since December last year and came just two weeks before Marawi marks the fourth year since local IS affiliates from Basilan and Lanao del Sur laid siege to the Islamic city.

The BIFF militants took defensive positions in the town’s public market starting around 4 a.m., preventing some civilians from leaving and using them as human shields, according to Lt. Col. John Paul Baldomar, spokesperson of the Army’s 6th Infantry Division.

Baldomar said the military gave local leaders time to negotiate with the gunmen to withdraw from the town to prevent bloodshed while prepared to dislodge them by force.

By 9 a.m., soldiers from the 601st Infantry Brigade and the police began their assault on BIFF positions, backed by attack helicopters.

After an hourlong offensive, the BIFF gunmen scampered away toward the hills bordering Maguindanao and Sultan Kudarat provinces.

No one was reported to have been wounded during the clash. Baldomar said bullet holes in the public market were the only damage reported.

“We are now in control of the public market in Datu Paglas [while] clearing operations are still going on,” Baldomar told reporters at a briefing.

The Army had allowed vehicles to pass through the national highway by noontime, relieving hundreds of commuters who were stuck for hours on the roads at the town’s borders with the municipalities of Columbio, Sultan Kudarat, Tulunan, Cotabato and the Maguindanao provincial capital of Buluan, about 12 kilometers away.

Soldiers and police pursuing the gunmen engaged them in sporadic gunfights. There were no immediate reports of casualties.

The BIFF gunmen belong to a faction led by Kagi Karialan, which maintains strongholds around the Ligawasan Marsh, about 50 km away from Datu Paglas.

They have been under pressure from intensified military offensives since they tried to take control of Datu Piang town on Dec. 3 last year, and for attacking an outpost of the Joint Peace and Security Team composed of government troops and members of the Moro Islamic Liberation Front in Datu Saudi Ampatuan town on March 18.

Datu Paglas Vice Mayor Mohammad Paglas told a local radio station in an interview that the gunmen were seen arriving in the town early on Friday morning aboard five cargo trucks. They were said to have been led by a certain Sulayman Tudon, and were also mostly from the town and were “young, about 15 to 25 years old.”

Just there to ‘rest’

“Since it is Ramadan, the LGU (local government unit) allowed them in town, provided they will not harm the civilians,” Paglas said.

After learning of the gunmen’s presence, the Army sent troops to check.

BIFF spokesperson Abu Jihad said their members, numbering about 150, had no plans to seize Datu Paglas.

“Our freedom fighters were there to rest and were about to return to our camps when soldiers arrived and fired at us. We were forced to return fire,” he said.

Fearing a full offensive, the BIFF took over the town’s public market and ordered the marketgoers and vendors not to leave.

As more soldiers arrived, the gunmen let go of the civilians and took defensive positions.

Interviewed by a local radio on Saturday afternoon, Mayor Abubakar Paglas said that during negotiations, local leaders told the gunmen they were not welcome in the town.

At least 5,000 people fled their homes, especially during the assault, but the mayor lauded the Army’s handling of the standoff that caused no injuries and major damage.

Datu Paglas was a hotbed of the Moro rebellion in the 1970s but has been generally peaceful since the 1990s after the town started banana production for export which provided livelihood to many locals. —WITH REPORTS FROM BONG SARMIENTO AND WILLIAMOR MAGBANUA

Read Next
Quezon Representative Suarez gets the virus
EDITORS' PICK
Kai Sotto continues to inspire Filipinos by sharing his passions and stories with Smart Prepaid
1Sambayan to nominees: Stick to word of honor
EDITORIAL: Good news, bad news
Alex Eala wins Grand Slam on Independence Day: ‘I hope I made my contribution to the country’
Trust Robredo’s political instincts – Kaya Natin! convener
Ahead of ONE: Full Blast II, Mongkolpetch warns Elias Mahmoudi: ‘Watch out for my fists’
MOST READ
Duterte, Mayor Sara unlikely to run under same slate in 2022, says Lacson
PH to have cloudy, rainy Monday — Pagasa
1Sambayan to nominees: Stick to word of honor
China cautions G7: ‘small’ groups don’t rule the world
Don't miss out on the latest news and information.