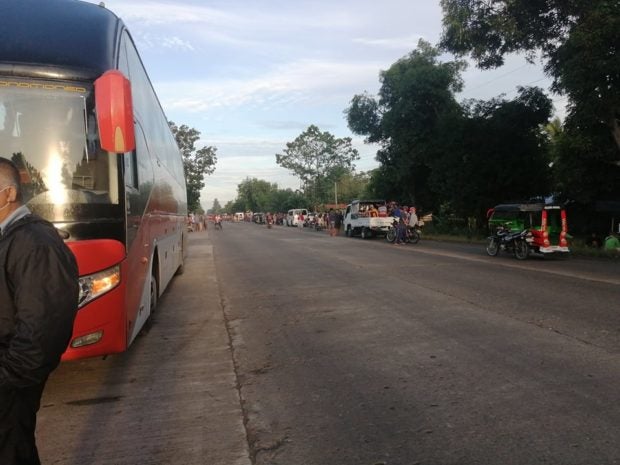 Hundreds of motorists and passengers were stranded along the Cotabato-Maguindanao border as the highway passing through Datu Paglas to Tulunan town in Cotabato province was closed to traffic beginning at 4 a.m. Saturday.

Also in the market were vendors and civilians who were prevented by the BIFF from leaving, making them human shields.

Baldomar said the Army and the police have surrounded the area where the BIFF are located.

“We are giving the civilian leaders to negotiate with the BIFF for a peaceful end of the standoff,” Baldomar told reporters.

“When necessary, we will use force, right now we are assessing the situation,” he said.

Abu Jihad, speaking for the BIFF, confirmed that the gunmen who occupied the town public market belong to the Karialan faction of the BIFF.

He refused, however, to reveal why they occupied the town center.

A cargo truck was blocked along the national highway leading to the town public market.

“We have been stranded here since 5 a.m.,” Allan Sindatuk, a motorist, said in a radio interview.

Benjie Martinez, an employee of the Bureau of Fisheries and Aquatic Resources (BFAR) based in Koronadal City, was among the hundreds of passengers stranded in the Cotabato-Magauindanao border, some one kilometer from Datu Paglas town center.

He was on his way home to Matalam, Cotabato.

He told radio DxND Radyo Bida, amid the ringing of gunshots, that at least 200 vehicles are stranded in that part of the border.

Police manning the checkpoint, he said, even advised them to turn back for their safety.

Datu Paglas Mayor Abubakar Paglas said negotiations are underway for the withdrawal of the armed men.

Armored personnel carriers from the Army’s 601st Infantry Brigade have been moving toward Datu Paglas while two helicopter gunships hover above.

Read Next
Ibuprofen does not worsen COVID-19 symptoms: study
EDITORS' PICK
Eleazar: PNP open to ICC probe but PH judicial process is working
Piolo Pascual: The Ultimate Heartthrob continues to level up
LOOK: ‘Low vaccination’ turnout in 4 Manila sites after no walk-in policy
SANTIS Delicatessen: The road to survival is sweet and savory
Internet: Overcoming pandemic lockdowns
Gilas out to prove Korea win not a fluke; Tab fires back at ‘lucky shot’ remark
MOST READ
Lacson or Pacquiao a possible presidential candidate for NPC – Sotto
Controversy shadows Chinese vaccine maker Sinovac
Palace: Face shields no longer needed to be worn outdoors
PAL to ax some long-haul flights to slow bleeding
Don't miss out on the latest news and information.